A Major Attraction in the Minor League

How Crawdads baseball (and a carousel) came to Hickory 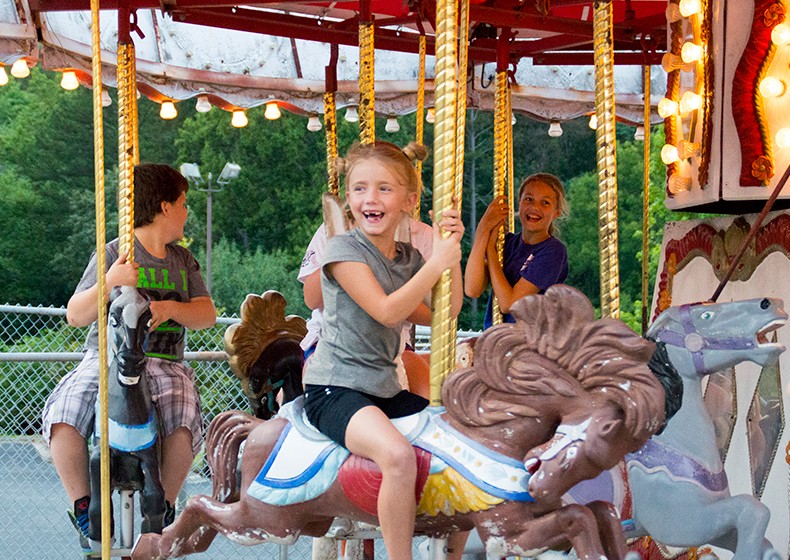 In 1992, Don Beaver, his brother, Luther, and his friend, Charles Young, bought a baseball team. Don and Charles played baseball in college, and the three men shared a love for the sport. Hickory used to have a team, the Rebels, but it folded in 1960. Baseball’s comeback started with a phone call. 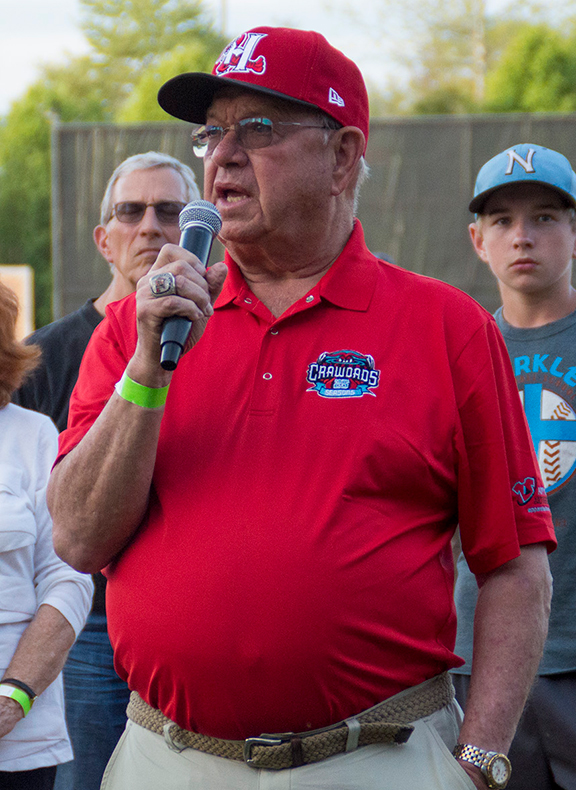 “Don Beaver was a friend and client of mine,” Charles recalls, who was a lawyer for 46 years and is now retired. “He called me one day and told me the Gastonia franchise was for sale. He was thinking of buying it and wanted to know if I wanted an interest in it.”

It didn’t take long for Charles to decide. He says he didn’t even ask how much of an interest or how much it would cost.

“I didn’t do it to make money,” he says. “I wanted to be involved because I love baseball.”

At the time, George Shinn — who owned the NBA Charlotte Hornets — also owned the Gastonia team.

“We signed a contract to buy the team in 1992,” Charles says. “Even though we didn’t have a place to play.”

George Murphy had set the wheels in motion. He was the PA announcer for the Rebels from 1946 to 1954 and kept hope alive that baseball would return to Hickory one day. When he campaigned for mayor in the 1980s, one of his campaign promises was bringing baseball back. 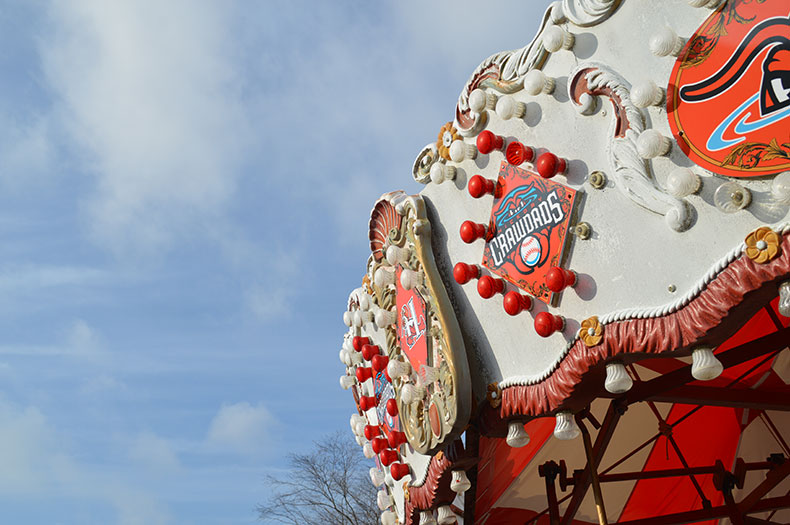 Thanks to the Beaver brothers and Charles Young, his dream became a reality. The new team needed a stadium, though, and he got the ball rolling.

“George got the stadium idea going. Elmer Winkler gave the land,” Charles explains. The stadium is named for a local Pepsi bottler, L.P. Frans. “His family gave $500,000 towards the building of our $4 million stadium.”

Charles was always on the lookout for ways to make a Crawdads game more fan-friendly. The ballpark already offered lots of entertainment choices in addition to the game itself. In either 2004 or 2005, he attended a minor league game in Altoona, Pennsylvania, where he discovered the perfect addition to “the Frans” stadium back home. 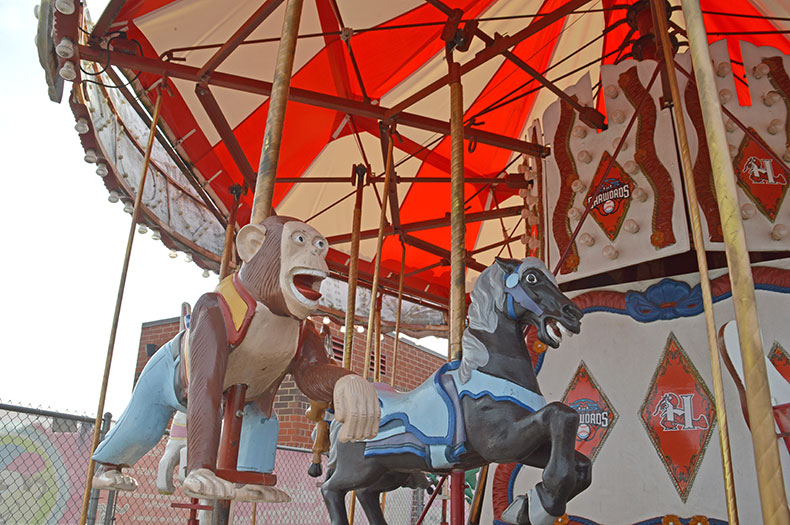 “They had what I called a ‘merry-go-round’ out in left field,” Charles recalls. “I went out to look at it and watched the kids riding it. I thought it was cool.”

He tracked down Altoona’s general manager, Todd Parnell, and asked how much a carousel cost and where he could buy one. He returned home and shared the idea with the other owners.

“They weren’t very enthusiastic about the idea at first,” Charles admits. “But they came around and, finally, we bought one.”

Before the carousel could be set up, the ground had to be prepared.

“We had to level out a plot and pour a concrete pad,” Charles explains. “We had to make sure it was stabilized, then we added a ramp for the disabled.”

Next on the list was “merry-go-round” music. The carousel doesn’t have a sound system, so he rigged up a tape deck and searched until he found the right music. 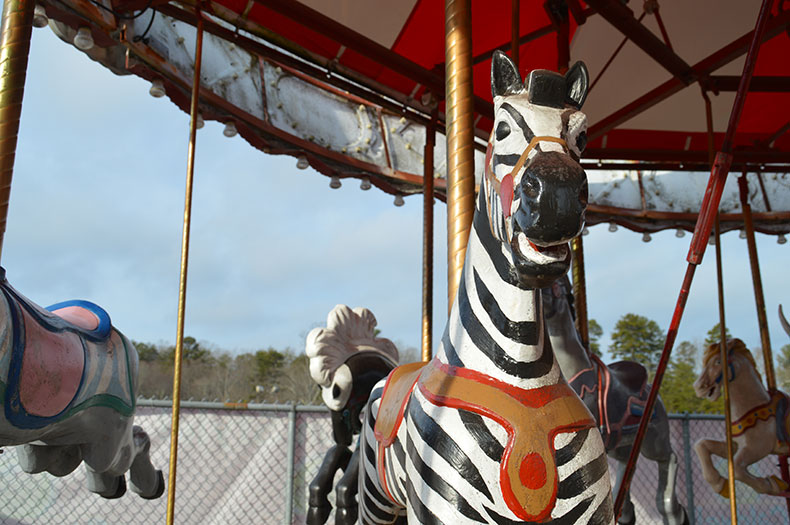 “It isn’t easy to find, but I think it’s a big part of the attraction,” Charles says. “The kids love riding it. My grandchildren do, too.”

The attraction was made by Carousels USA, a San Antonio-based manufacturer that is no longer in business. Keeping the carousel in top form has become a local endeavor.

“We partner with local high schools every few years when the animals need to be repainted,” explains Ashley Salinas, director of Creative Services and Media Relations for the Crawdads. “We send a few animals over to the art programs and they touch up the faded and chipped paint. The most recent work was done by Fred T. Foard High School students in 2018.”

In 2006, Minor League Baseball rated some of the minor league ballparks’ amenities. Noting the Crawdads’ playground and carousel, it flagged the stadium as a trendsetter.

“It was one of the first parks with a working carousel,” it said, “sparking a trend that has taken off in Minor League baseball.” 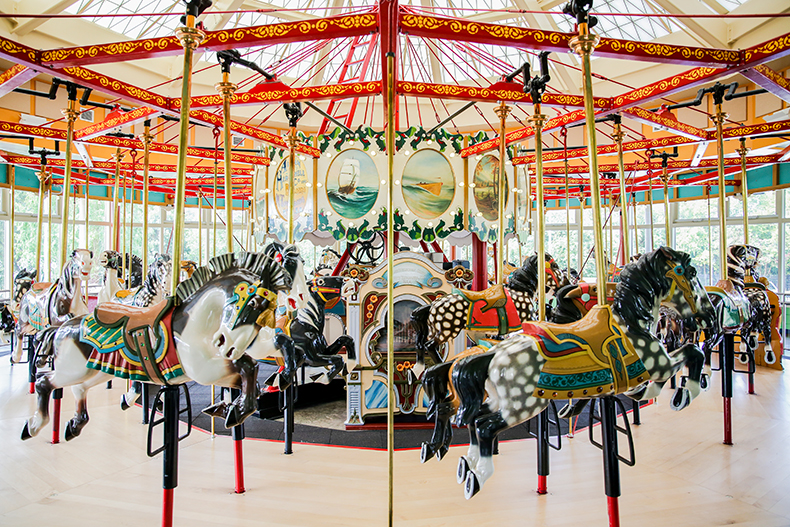 Take a spin around the state!

Check out some other carousels in North Carolina, like this Allan Herschell Carousel at John Chavis Memorial Park in Raleigh. Call or visit websites for more information.