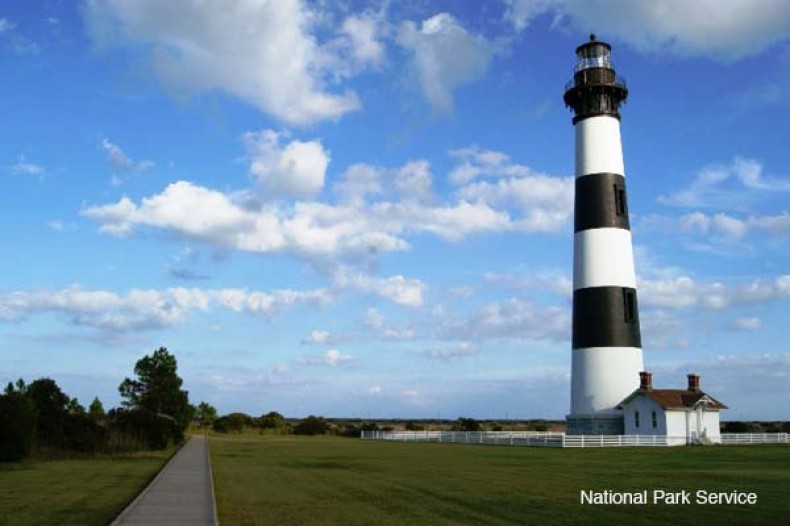 After undergoing a major restoration, Bodie Island Lighthouse is open to the public for climbing for the first time. Those who ascend its 214 steps earn a terrific, panoramic view of marshland, sound and sea. The National Park Service owns the surrounding land so you can see nearly the same scenery as the old-time lightkeepers once saw.

The historic lighthouse also boasts a newly restored, original first-order Fresnel lens, a complex and revolutionary light system much welcomed by mariners. Its giant, beehive structure uses a 1,000-watt bulb and 344 gleaming prisms to shoot patterned light beams nearly 20 miles out to sea. Only a smattering of U.S. lighthouses today, including Currituck Beach Lighthouse in Corolla, are equipped with the first-order Fresnel lens.

Bodie Island (pronounced "body") Lighthouse sits on Roanoke Sound, north of Oregon Inlet, and south of Nags Head. At 156 feet it is one of only a dozen surviving "tall brick tower type" lighthouses in the U.S. Three more are also in North Carolina: at Corolla, Cape Lookout and Cape Hatteras.

Bodie's recent renovation adds another chapter to its dramatic history. Shoddy construction set the original 1847 lighthouse canting to the east, so it was replaced in 1859. However, Confederate troops blew up the new lighthouse so invading Union forces couldn't use it.

After the Civil War, another lighthouse was built and the first-order Fresnel lens was installed. But less than three weeks after its 1872 opening, a flock of geese crashed into the lantern and damaged the lens. There were also early problems with improper electric grounding during storms. Lighthouse keepers persevered through these and other challenges, and this beacon of hope and safety shines bright today.

Those who choose not to climb Bodie will still be rewarded with exhibit photos and lighthouse lore at the restored Double Keeper's Quarters. Stop by the Bodie Island Visitor's Center to hear about other area attractions.

Learn of other adventures and events nearby: