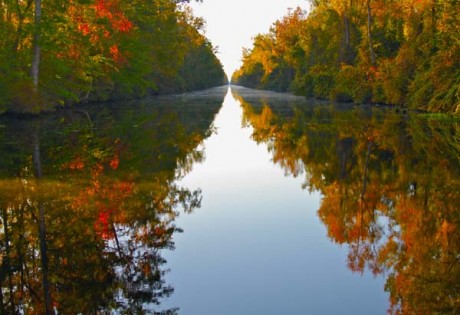 The historic Dismal Swamp Canal in its autumn splendor.

Nature never quite surrendered in Camden County. Over hundreds of years, men cut into the wooded wilderness, dug out its wetlands and waterways, and pulled out of the land whatever they could, but the natural wonders won. Now, Camden County embraces its natural character. You can see the pride on Saturday, Oct. 19.

They call it Dismal Day, but last year’s inaugural event was anything but dismal. It happens Saturday, Oct. 19 from 10 a.m. to 2 p.m. at the Dismal Swamp Canal Welcome Center, on Hwy. 17 just south of the Virginia line and up the canal from South Mills. The event shines on the area’s history (a lighter boat like those that carried shingles from the swamps, a moonshine still like those that worked in those swamps, logging stories, stories of slaves who dug this canal and others who hid here) and on humans abiding with nature (recreational boats, farm products, nature-based crafts). People will be on a 5K walk/run along the new (2005) trail that runs along the canal, riding boats and wagons, following a scavenger hunt, trying the bounce house, and enjoying Brunswick stew, seafood and barbecue.

Fall, winter and spring are high times here.  The 14,400-acre Dismal Swamp State Park (it borders the 111,000-acre Great Dismal Swamp National Wildlife Refuge) hosts a large population of black bears and bobcats, and a very accessible 16.7 miles of hiking and mountain bike trails that lead to an abundance of birds and woodland life of all kinds.

The Dismal Canal is part of the Atlantic Intracoastal Waterway. Some 1,500 boats stop at the unique waterway-highway Welcome Center, mostly in fall and spring. As the oldest continuously operated man-made canal in the U.S., its colorful history began in the 1720s when men realized its potential for moving timber products from here. Slaves dug it by hand beginning in the 1790s, and it opened, including two sets of locks, in 1805 to boats that were poled and towed from paths on its banks. The famous Halfway House hotel just south of the state line attracted all kinds of romantics and renegades during the 1820s.  The Union Army in April 1862 sent some 3,000 troops to blow up the canal’s locks at South Mills, but about 750 Confederate defenders held them off until they succumbed to the heat and swamp bugs.

Camden County today is proud of its peace and quiet, but boasts of its achievements and possibilities. Its fields produce corn, soybeans, cotton, rapeseed and lots of white potatoes. Paddling here is true adventure. North River Campground is a big tenting and RV destination (hosting Seafood Fest Oct. 11–12). Its schools have long had a superior reputation, and many who work in southeast Virginia prefer to live here. Emerging near the state line along Hwy. 17 is a 300-acre Camden County Eco-Complex, destined to be a campus of mixed use businesses focused on environmental research and industry.

“We may be small,” says county commission chairman Gary Meiggs, “but our sense of caring is big. Growing up here, everyone knew where you were, and when you got home. The people are devoted. What we do here, we do really well.”