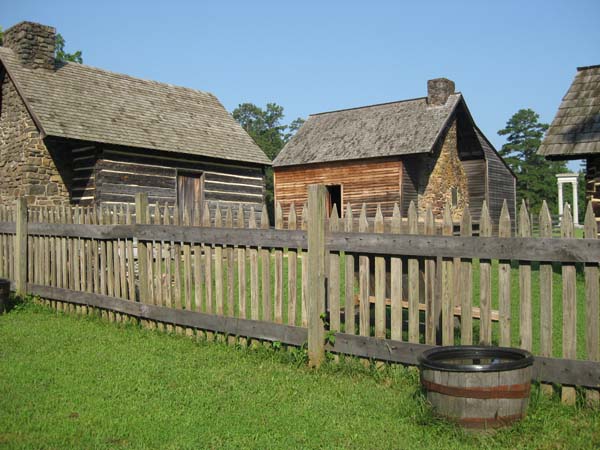 The Bennett Place State Historic Site, a popular stop on the North Carolina Civil War Trails, recently celebrated its 50th year. The maintenance of the land and buildings, the care of exhibits, and its educational programs are a tribute to the efforts of the site staff, the North Carolina Dept. of Cultural Resources and a dedicated cadre of volunteers and supporters.

The site itself reveals what life was like for a rural farm family at a time when their log home became the place where one of the most monumental events of the Civil War transpired — the largest troop surrender of the war. The Bennitt family and their three children (research says Bennitt was the actual spelling) settled on a 325-acre farm in 1846 in Orange County near what soon would become the area's railroad depot. Located between Hillsborough and Durham, the picturesque site has served as a Civil War film shoot location. Its visitors center runs a 20-minute "Dawn of Peace" orientation video, as well as a presentation showing Union Gen. William T. Sherman and Confederate Gen. Joseph E. Johnston meeting on April 18, 1865, to negotiate an armistice for the formal surrender of the armies of the Carolinas, Georgia and Florida (comprising more than 89,000 soldiers). The museum gallery contains period photographs, maps, uniforms and weapons, and is slated for an ambitious expansion project.

After the April 9 surrender of Confederate Gen. Robert E. Lee to Federal Gen. Ulysses S. Grant at Appomattox Courthouse, Va., the Confederacy's Pres. Jefferson Davis authorized Gen. Johnston to negotiate with Gen. Sherman. Sherman was in Raleigh after his notorious march through the Carolinas, and Johnston, having lost badly the month before to Sherman in Bentonville (Johnston County), was in Hillsborough. The Bennitt place was halfway between. Negotiations took three sessions between April 17–26, during which the Bennitt family attended to the dignitaries. The original pitcher that Mrs. Bennitt used to provide water to the generals survives.

The Bennitt farmhouse and kitchen, destroyed in a 1921 fire, were recreated in the 1960s from period sketches and photographs. It displays period furnishings today. "Surrender Ceremony" programs each April are well attended as is an annual 1860s style "Christmas in the Carolinas" event.

The Everett-Thissen Research Center at the site memorializes Robinson Everett, an icon in the Durham legal community, and his father, who were instrumental in helping preserve Bennett Place. It was established through the support of Mr. Charles Thissen, who donated more than 900 books including a set of the Official Records of the War of the Rebellion. In these pages are the six proposed "points of pacification" advanced by the Confederacy, and a dispatch from Gen. W.J. Hardee to Gen. G.P.T. Beauregard saying, "We are all agog and surmises are made that negotiations are afoot between Johnston and Sherman."

Betsy Vatavuk, whose late husband William was also a longtime supporter of the site, with others established a scholarship fund for a deserving North Carolina student studying history. Information about the scholarship fund and application can be obtained by contacting Bennett Place.

In addition to the site's museum shop, an online store has been set up by the Bennett Place Support Fund members to benefit the site: bennetplacehistoricsite.com

Bennett Place and grounds, including a nature trail and picnic area, are accessible to the physically challenged.

Joan Wenner is a history and preservation writer based in Farmville. She is also on the editorial staff of Civil War News.