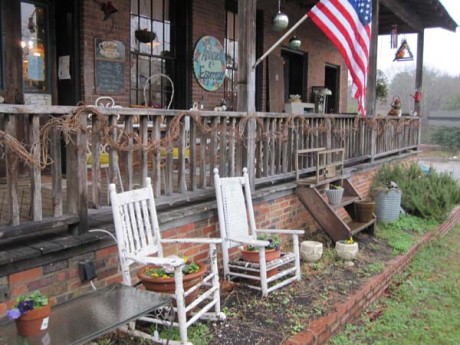 Driving west on Highway 24/27 toward Cameron, the countryside's big barns and sparkling ponds beckon prettily. A little park tempts a stop, but then you see railroad tracks and four antique stores in a cozy cluster. And up over the hill, more antiques shops await.

Cameron, incorporated in 1867, used to be the end of the line for the Raleigh and Augusta Railroad. Named for a railroad official, Cameron became a bustling commercial center with turpentine distilleries, a carriage works, hosiery mill, hotels and saloons. The Lucretia dewberry made it king after it was introduced to Moore County in 1892. Farmers who planted its bushes unloaded big yields for auction at the railroad tracks, and Cameron was named "The Dewberry Capital of the World." Indeed, from 1910 to 1920, between 60,000 and 90,000 dewberry crates were shipped out in refrigerated boxcars each season. Unfortunately, rust struck the plants and no new bushes were planted, partly because tobacco had emerged as the cash crop. By the 1950s, the dewberry and turpentine industries had died out and the train didn't stop as it honked through. 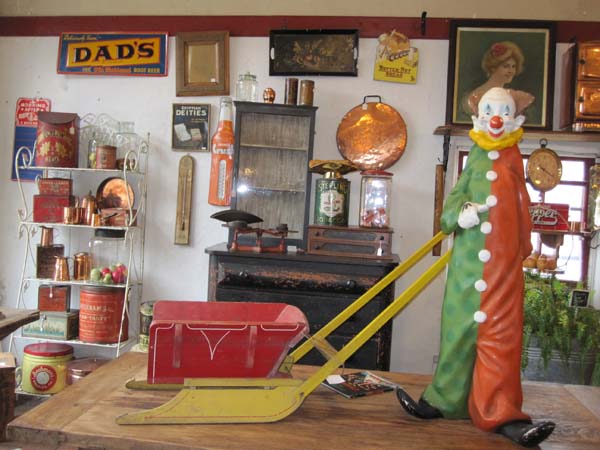 Today, antiques are the town's biggest industry, attracting eager interior designers and home decorators on the hunt for old treasure. Each of its shops has its own unique appeal. McPherson's, which once housed a general store, sells a genteel mix of cottage furniture, linens, china, scarves and handbags, North Carolina wines and food products such as chutneys, barbecue sauce and yes, dewberry jam. (If you are wondering, the dewberry tastes like a mild blackberry. Locals say it makes a mean pie.) The friendly proprietor, Dianne Taylor-Webb, serves lunch in the store — tasty concoctions such as turkey, brie and apple sandwiches. She is enthusiastic about the state's vineyards and holds all-day tastings of wines.

Across the street, The Market, housed in the historic Muse Brothers department store building, sells furniture, glassware, rare collectibles, lamps and home décor, along with refreshing drinks at its Cappuccino/Espresso Bar. Behind The Market is the restored Old Cameron Jail, built around 1885. If it's locked, ask in the Market to see its interesting vintage photos and posters.

Further on through the village, you'll see the venerable Hardware Antiques Store, where dealers showcase stoneware, paintings and formal and country pieces in handsome displays. Dewberry Deli & Soda Fountain is located downstairs. It sells yummy, old-time concoctions, including vanilla coke floats and banana splits, along with salads, homemade soups and PB & J "sammiches" for the kids.

Nearby, This Old House is full of nostalgic "smalls" easy to take home, including albums, children's books, cartoon glassware, photographs and cookie jars. You walk through at least nine rooms, including a kitchen and covered back porch. This Old House further distinguishes itself as the only shop open on Sundays in Cameron.

In addition to these shops, there are many more to explore on Highway 24–27/Carthage Street, all within a half mile or so. Other points of interest include Cameron's old churches and Victorian and bungalow homes. Wear good shoes and expect to buy items you don't need but just can't live without.

The Moore County seat, Carthage, is about 10 miles from Cameron down Highway 24/27. Its 1922-built courthouse and traffic roundabout mark the center of downtown. 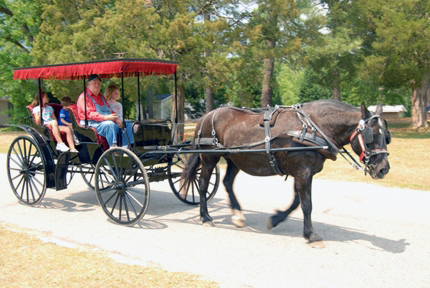 Carthage's history includes a fascinating look at the Tyson and Jones Buggy Factory, one of the largest buggy manufacturers in the nation. It operated here from 1850–1925, and at its peak, turned out 3,000 carriages and buggies a year. As the "horseless carriage" (aka cars) grew in popularity, the factory began its demise. Its last buggy was sold in 1925 to an elderly gentleman who declared he'd never drive an automobile.

You can learn more about the company, see its buggies and view photographs of its executives and office workers at the Carthage Historical Museum. The museum also features a visual timeline, starting in 1796, covering its schools, businesses and churches, and displays prescription medicines sold from a local drugstore. Its War Room has uniforms and memorabilia from those who served, and explains a World War II aviator's monument at the courthouse. Open Sundays from 2–5 p.m. or by appt. 202 Rockingham St. (910) 947-2331 or www.townofcarthage.org 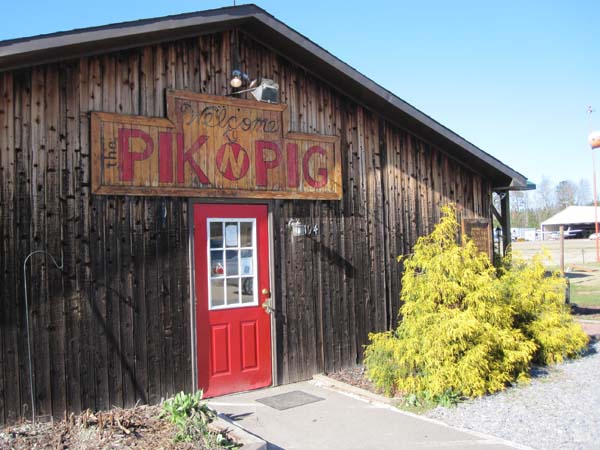 When you want good barbecue, flying doesn't usually come to mind. And when you picture flying, you don't generally think of good 'cue. But partners Ashley Sheppard and his mom Janie have combined these two very worthwhile pursuits at their popular Pik 'n' Pig restaurant out at Gilliam-McConnell Airfield. There, customers munch succulent, slow-cooked brisket while watching military helicopter maneuvers and small planes take off and land. On especially lucky days, they catch jaw-dropping loops and tricks by daring pilots. Once a local secret, the restaurant is now nationally known, especially to hobby pilots who readily launch for lunch and who appreciate the small, privately-owned airstrip's simplicity.

The Sheppards, third-generation barbecuers blessed with fourth-generation staff, opened here in 2007. Since then, they've added a covered outdoor porch and another dining area. In addition to wood-fired BBQ plates and sandwiches, Pik 'n' Pig serves starters like smoked wings and desserts like Coca-Cola cake. 194 Gilliam-McConnell Road (about a mile from downtown Carthage). (910) 947-7591 or www.piknpig.com

For new fashion, check out Lisa's Boutique (111 McReynolds St., near the courthouse). Its warm owner will help you put together an alluring, contemporary outfit. Vintage hounds can browse three thrift stores — Suga's, Re-Do and Christian Outreach store — in a row on Courthouse Circle.