An Alternative Form of Wind Energy

The Asheville Community Band opens its season this month 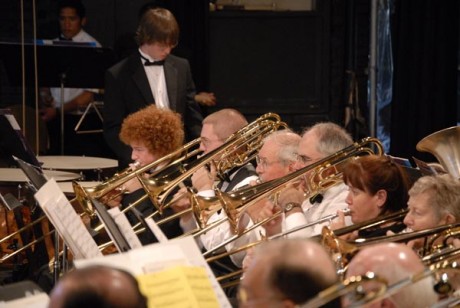 For more than 30 years, the Asheville Community Band has delighted audiences with its alternative form of wind energy. Sponsored by UNC-Asheville, the band formed in 1979 under director Patricia Garren. Today, the band is an independent nonprofit organization led by Michael Robinson, an award-winning career high school band director and the current director of bands at Mars Hill College. The ensemble plays three ticketed concerts each season at Asheville High School auditorium, plus a fourth free concert at the Folk Art Center on the Blue Ridge Parkway each Memorial Day weekend. Concerts feature a variety of wind band music chosen to maintain community appreciation for the style and sound of the concert band. The Memorial Day weekend concert honors the men and women of the U.S. armed forces.

The band's nearly 100 members represent six western North Carolina counties. They range in age from talented teens to active octogenarians. Six are charter members. Many also are members of an electric cooperative, including Haywood EMC and French Broad EMC. They will donate over 5,500 hours in rehearsal and performance time to the Asheville Community Band this season, not counting home practice and travel time. Most also participate in other community musical organizations.

The Asheville Community Band has performed concert tours in Europe and has played many times for national band director conferences. They are slated to perform again for the American School Band Directors Association national conference this coming June.

When it comes to identifying our natural, renewable energy resources, you won't necessarily see musicians on the the list, yet they are a major power source within their communities. A recent survey of the band members revealed more than 40 arenas of community volunteerism in addition to their music. They work for the Asheville Visitor's Center, the Manna Food Bank, protective shelters, foster parenting, Habitat for Humanity, Civil Air Patrol and the Special Olympics, to name a few. Churches, civic associations, medical facilities, nursing homes, shelters, schools and rescue squads all benefit from their community service contributions. You might say they are the lifeblood of their communities, and judging from the number of them who donate regularly to the region's blood and platelet banks, you would be correct.

The Asheville Community Band also believes in sustaining renewable resources. Solely supported by ticket sales and donations, the band has given over $30,000 in scholarships to students from western North Carolina to pursue advanced music education. In 2011, the band added summer music camp scholarships for middle and high school students, helping to ensure that music-making and music education continue and that there will be future generations of community-minded musician-volunteers.

Stephanie Lyon has played French horn for the Asheville Community Band since 2003. She is a homemaker, administrative assistant and Habitat for Humanity volunteer. She and her husband, Ray, live in the Jonathan’s Creek area of Waynesville and are members