Opening a ski resort in the Southeast may have been seen as a foolish move back in the winter of 1967-68, but one Alabama dentist knew such a resort, built around an alpine village in the North Carolina mountains, would thrive. In the winter of 1967-68, Dr. Thomas Brigham — with the help of local developers and brothers Grover, Spencer and Harry Robbins — realized his dream and opened Beech Mountain Resort for business.

At 5,506 feet in elevation, the resort remains one of the highest ski areas in the East. The small town of Beech Mountain receives a yearly snowfall average of 90 inches and the ski resort snowmaking abilities cover the 95 skiable acres.

“Skiing in the South was just being developed, and this was a unique facility at 5,506 feet in elevation with a Swiss Bavarian village. It exposed the Southeast market to something new,” says general manager Ryan Costin. “That continues to be one of our strongest assets — a layout where you can navigate the village and experience all the wintertime activities we have here.”

Over the decades, the resort has increased skiable acreage, upgraded snowmaking abilities, increased trails and lifts, and added snowboarding, ice skating and snow tubing to its winter activity mix. The resort features four restaurants, ski shops and a sky bar located on the slope.

New this winter is a streamlined check-in process in which customers purchase lift tickets and rental equipment at a central location, then go straight through the fitting process to hit the slopes in less time. Customers also can buy multi-day tickets and multi-day rentals to avoid repeating the same process each day. 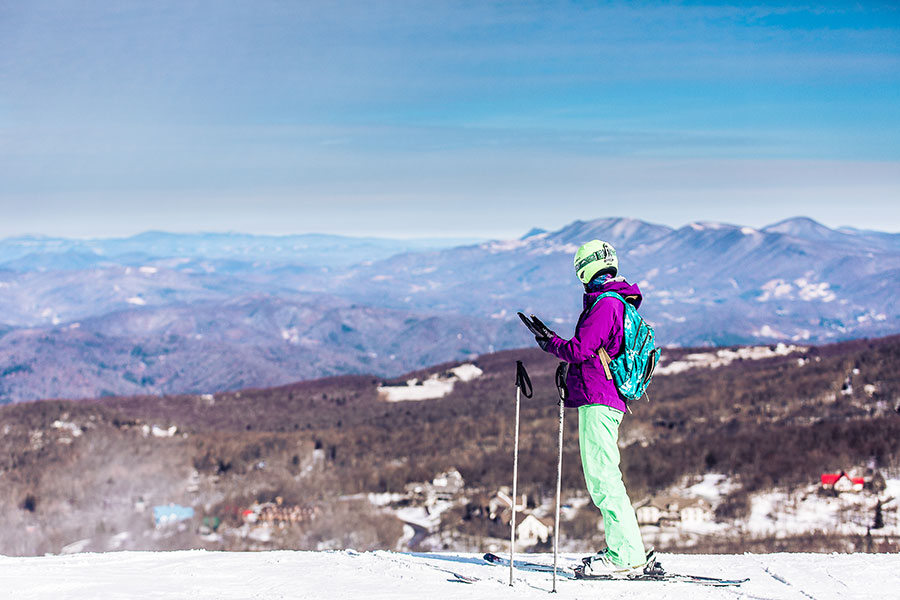 “Going into the 50th year, we took a hard look at not only the product on the mountain, but the process, too. That’s one of the elements we needed to make easier,” Costin explains. “We want people to spend as much time outside enjoying activities as they possibly can.”

Though the resort strives to stay modern, for this special 50th year, customers will be able to “ski like it’s 1967,” with reduced lift ticket prices for night skiing opportunities throughout the season. Anniversary events are also scheduled January 20–28.

“It’s an exciting year for us and we look forward to another half century of serving skiers across the Southeast and Mid-Atlantic regions,” Costin says. “A lot of people are surprised at just how good a winter season we have. Our infrastructure provides a strong product all winter.”

The NC ski season usually lasts until late March or early April, depending on conditions. Check out these other ski resorts based throughout the NC mountains: