Eco Tour on the Half Shell

A Hatteras oyster company offers a close-up view of aquaculture 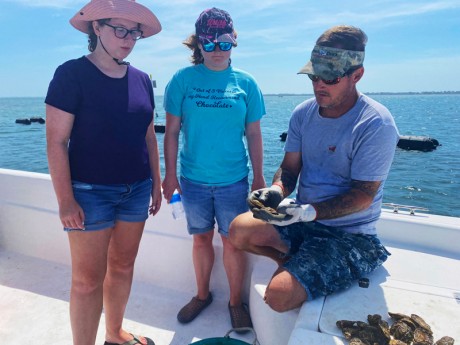 Now there’s an outfit in Hatteras that’s combining all three. Sticky Bottom Oyster Company (252-256-2222), a member of Cape Hatteras Electric Cooperative, is offering a local sound-side eco tour on the way out to their oyster farm, where the process of farming oysters is explained with the opportunity to wet a line. My wife, Renee, and two of my daughters, Olivia and Nicole, and I were lucky enough to be the “test family” for the tours. It was enjoyable and educational.

Sticky Bottom is a three-way partnership between Ricky Jones of Frisco, Todd Ballance of Hatteras, and Gerald Fitch of Reidsville. Todd works on the water full-time: Ricky splits time between piloting the ferry to Ocracoke and tending to the oysters, and Gerald gets in work for the company when he can.

We met Todd one July morning where a 25-foot Carolina Skiff awaited us. Before setting out, he gave an education in oysters. He explained that just-hatched oysters are called spat, which take seven to nine months to grow into marketable 3-inch oysters. 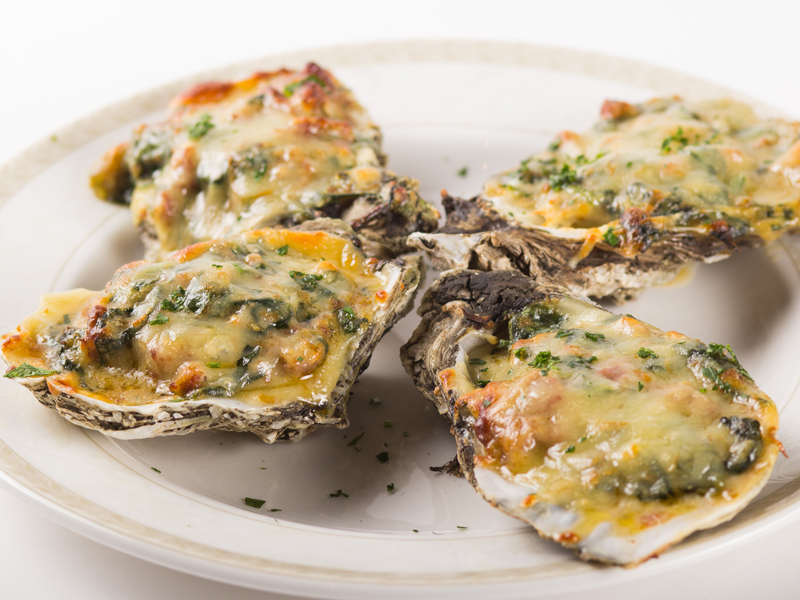 Be sure to check out one of Todd Balance’s favorite recipes:
Oysters Rockefeller.

“The company we buy spat from has brood stock and different types of oysters that have different attributes,” Todd says. “They have temperature-controlled spawning tanks and they can manipulate the temperature to make the oysters spawn. Their oyster are triploids, they’re hybrids and they are sterile. It makes them disease resistant.”

Their oysters grow in bags in floating cages (which have blue caps that they can take off in case a hurricane is imminent, allowing the cages sink to the bottom to be retrieved after the storm). Oyster cages are in 4- to 8-foot-deep water with six bags of oysters per cage.

At the dock is a large PVC pipe that that rotates and is perforated with three different diameter holes, which cleans the oysters and classifies them by size.

The area has a rich past, evident along a canal on our way out: Todd pointed out where Native American settlements used be, as well as a spot where a porpoise factory once rendered fat into oil.

When we arrived at the oyster lease, Todd noted that the rows of floating cages provide cover for many species of mollusks and finfish — and for those who hunt them. His point was immediately illustrated as a cage, winched onto the boat, released tiny crabs, shrimp and fish onto the deck. Watching them get tossed back in the water was kind of sad, as pinfish and sheepshead eagerly awaited an easy meal.

After the trip, I was able to talk to Ricky. (If ever in Frisco, be sure to check out Tavern on 12, where Ricky’s brother Steve serves some great food.)

“We are starting our third year now and still have a lot to learn — there’s a lot of trial and error,” Ricky says. “One of the main interesting things about oysters is that one oyster filters 50 gallons of water per day, so the more aquaculture farming we can get going will just help clean our waters.”