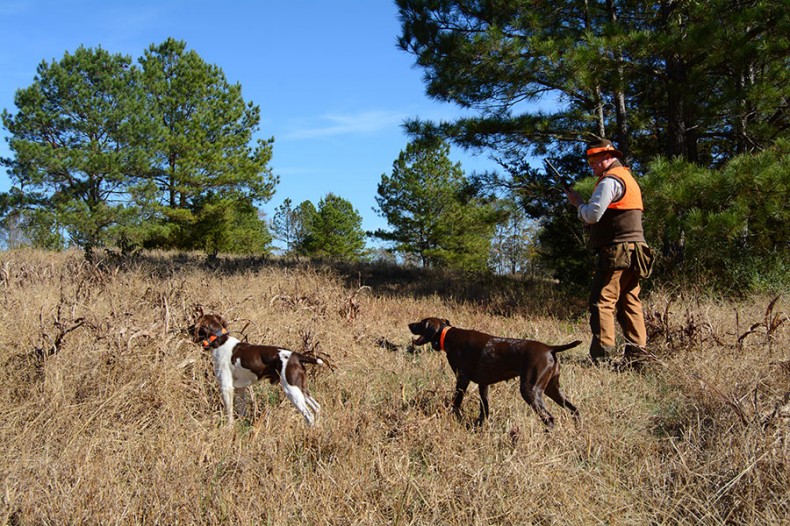 Tim Britt of Charlotte moves to flush a quail pointed by Bentley, left, a Brittany, and Annie, right, a German Shorthaired pointer.

Annie, my German shorthaired pointer, had slammed to a point next to a row of amber broomstraw. Bentley, an American Brittany, was honoring her point a few yards back. Tim Britt flushed the birds — three quail rocketed out of the cover. He and Thomas Harvey (Bentley’s owner) each dropped a bird. I sent Annie after one retrieve while Bentley made the other. It was a scene to be repeated many times that day.

There was a time in North Carolina where the sequence above was commonplace from the Piedmont to the Coastal Plain. Wild bobwhite quail were abundant in rural areas. But factors such as modern farming practices and land development have taken their toll on wild quail populations.

On that November day, we were hunting at Devil’s Rib Hunting Preserve in Peachland. Hunting preserves don’t feature wild birds, but offer pen-raised quail, chukar and ring-necked pheasant for put-and-take hunting. It’s the hunting equivalent of a stocked pond. They are great places to introduce dogs, youth and new hunters to upland gunning in a safe, controlled environment, or just enjoy a day afield with friends. And the birds make for tasty meals.

After the hunt, I asked Britt why he frequented hunting preserves. Although a wild quail hunt is an experience in its own, preserves do meet his current wants and needs.

“I grew up on a tobacco farm in Sampson County in the 1960s and 1970s, where wild quail were our pursuit and there were plenty to be found at the time. We hunted our own coveys as well as all the coveys on local farms, because my dad knew everyone and had their blessing to ‘shoot as many birds as you like.’ We also had six or seven well-bred and highly trained bird dogs in our kennel,” Britt explains. “Preserves afford me the pleasure and nostalgic connection to my youth and memories of my father, who is now gone.”

Like golf courses, hunting preserves can offer the same activity yet vary tremendously in price. Most of this is due to ancillary amenities such as guide fees, lodging, meals and general ambiance. The golf analogy is apt, as while the activity is the same on the local municipal course as it is at a high-dollar resort, it’s the extras you pay extra for. And there’s no shortage of business for the higher-end hunting operations.

For example, I have a couple of German shorthaired pointers. The older dog (Annie) and I spent many training sessions at Anderson Creek Hunting Preserve in Lillington. There’s an old saying “it takes birds to make a bird dog.” By buying a few birds at a time and creating training scenarios, I was able to finish Annie ­— which includes shooting birds over her­— in a safe, controlled environment. In this case, the “municipal” course becomes a “driving range.”

Now that his career and life are not on the farm, Britt appreciates the accessibility a hunting preserve experience provides.

“I can book a hunt, invite a friend or two, bring my gear and arrive at the preserve knowing the main critical components are in place. The hunt goes well. The time and conversation with friends unfolds. I get to watch the dogs work. I reconnect with my roots, my past and my now-gone dad. My heart, mind and soul are lifted. Life is good.”