Make the most expensive meat at the grocery store 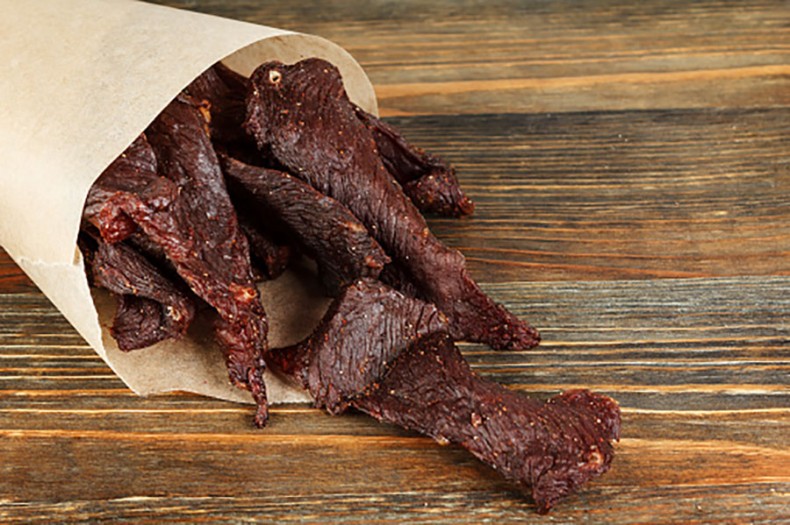 You think the filet mignon or the thick T-bones are the most expensive cuts of meat at the grocery store? Try pricing the bags of beef jerky. They can cost upwards of $16 a pound.

I love to make venison jerky, but I’ve had jerky made from wild turkey, goose, duck, pheasant and elk. It’s not hard to make, and lean beef works just fine as well.

With deer, I bone out at least one of the hams and separate the roasts, then cut those into large chunks to freeze. It makes them easier to handle when cutting. I bought a small Cabela’s electric slicer to make the task easier, but the key to cutting 4- to 6-millimeter slices is to use frozen or mostly-frozen meat. Thawed meat is too “squishy,” for lack of a better word. You want a consistent cut for uniform drying time. Too thick and it takes forever; too thin and it crumbles when done.

After cutting, you need a marinade or rub. An internet search turns up all manner of options, but my “go‑to” are Allegro marinades made in Paris, Tennessee, and available in most grocery stores. They make many flavors — I use Original for sensitive palates and Hot & Spicy (with added pepper) for my personal stash. I like my head to sweat a little when I eat jerky. Teriyaki is popular with my teenage girls.

I marinate the meat strips overnight in the refrigerator, then shake off excess marinade before placing the meat on the dehydrator. My model has five slotted trays and what looks like a blow dryer that inserts in the middle. Pretty low-tech. I flip my pieces on the bottom tray over half way through the process and move the trays above at the three-hour mark. Six to eight hours later I have jerky. I like to bend the strips, and when I see white fibers within the strip I know it’s done.

Dehydrators can range from about $40 to $250 (Here's a mid-range option from Gourmia.), and you can use fruit and vegetables in them as well. For those who don’t hunt, any lean meat store-bought will do, such as brisket or London broil.

For those who don’t have a dehydrator, a conventional oven works fine, set at a range between 150 and 180 degrees. Remember, you are drying, not cooking the meat. You can place your meat strips on oven grates or a pan with a rack, or hang them with toothpicks. Check every few hours and test by bending and biting.

Making jerky gives a whole new life to your freezer meat. Got some freezer-burned meat? No problem. Trim it and go. Just remove all fat, skin and connective tissue. And while the sodium in the marinade should act as a preservative of sorts, I freeze my finished jerky for later use and refrigerate what I’m going consume in the next couple of weeks. Of all the methods I’ve use to prepare wild game for those not accustomed to it, venison jerky has been the most universally accepted and enjoyed by my non-hunting friends who have tried it.