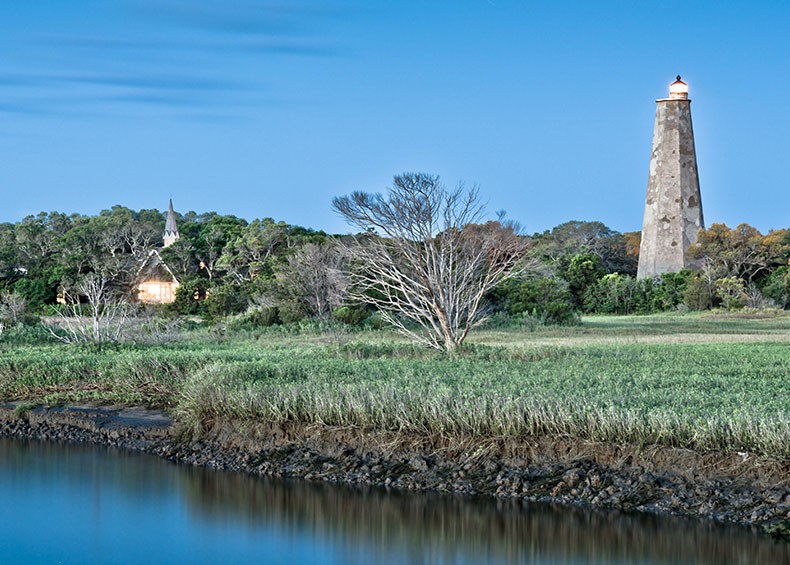 “I think it’s the most beloved [North Carolina lighthouse] because it is the oldest,” says Chris Webb, the executive director of the Old Baldy Foundation, a nonprofit dedicated to the maintenance and preservation of the lighthouse. “It’s very unique when you visit it. We are the 13th oldest [lighthouse] in the country. … There aren’t very many 200-year-old lighthouses anywhere.”

And while a birthday party and celebration was held in April to mark the milestone, a variety of events are being held throughout the year in honor of the anniversary. Webb describes the island’s community as transient — comprised of primary residents, vacationers, day visitors and part-time property owners — so events are planned throughout the year.

“Old Baldy is not just a treasure of Bald Head Island. It’s not just a local treasure. It’s a treasure of the state,” Webb says. “We wanted to do several things in different seasons to appeal to everyone, so that’s why we’re trying to spread it throughout the year.”

The goal of North Carolina Treasures Weekend is to celebrate North Carolina arts, cuisine and history. On Friday, a dinner is planned at the Shoals Club featuring Carolina cuisine. On Saturday, author and historian Kevin Duffus will host a presentation and book signing on the lighthouse grounds where he’ll reveal his latest book, “The Story of Cape Fear and Bald Head Island.” On Saturday evening, enjoy the Gala in White, the 30-year island tradition that kicks off the summer season.

The weekend will pay tribute to Old Baldy with its theme, “Two Centuries of Light.” Family-friendly events are planned to include historic re-enactors, Colonial-era food, a Run for the Light, 10k, 5k and 1-mile night run, and more.

Enjoy the last party of the season featuring a celebration of the pig, NC agriculture, concert, oyster roast, wine dinner and more. A portion of proceeds will benefit Old Baldy Foundation.

You can reach Bald Head Island (baldheadisland.com) by a passenger ferry in Southport at Deep Point Marina, 1301 Ferry Road. Departures are at the top of every hour. There are no cars on Bald Head Island, but you can rent a golf cart or bike. However, the lighthouse is a short five-minute walk from the ferry landing.
Visit the Keeper’s Cottage to buy tickets a self-guided tour. Admission: adults, $6; ages 3–12, $3; and ages 3 and under, free. Hours are seasonal.

For complete weekend schedules and ticket information for these celebrations and events, visit oldbaldy.org and click on the “200th Birthday” tab.

Myra Wright is a North Carolina-based travel writer. She enjoys exploring the state with her husband and three kids.