Along the Blue Ridge Music Trails 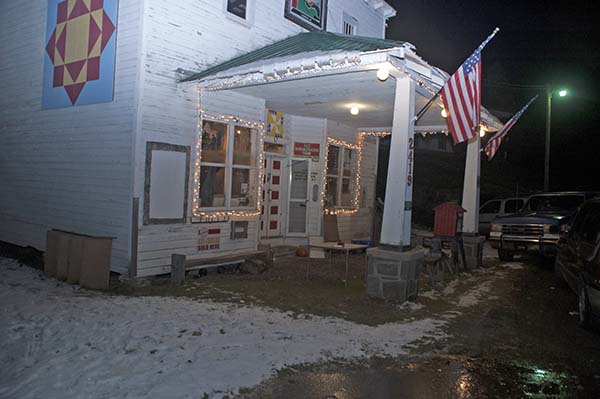 Inside the Phipps General Store in Ashe County, fiddlers, banjo players and other musicians sit in straight-back chairs around a big circle, pickin’ an old-time tune. Behind them, audience members on wooden benches and in chairs tap their feet to the music. Outside, men, women and young folks stand around under a covered entryway, swapping stories with friends.

“This pickin’ is like going back 50 years in time when folks from the community came together on weekends,” says Joe Clayton of Grassy Creek. “It provides a good venue for musicians of all skill levels, as well as dancing and singing.”

Click on the photo to view slideshow of music venues along the Blue Ridge Music Trails.

Every Friday night, Rita Scott opens the old red and white doors of the Phipps General Store for a jam session. Inside the wood-framed building, musicians play both bluegrass and old-time music in a room filled with memorabilia hanging from the ceiling, including old farm tools, a well-worn quilt and a burlap feed bag. A steer’s skull, a bobcat’s skin and a stuffed deer head adorn the walls.

“It was my dream to have a place where people could come and play music,” says Scott. “Before this, my friends and I would gather at people’s homes.”

“Blue Ridge Music Trails of North Carolina” by Fred C. Fussell with Steve Kruger, is published by The University of North Carolina Press. Compiled by the North Carolina Arts Council, both the printed ($20) and e-book versions ($10-$20) have maps and a CD. Order it through uncpress.unc.edu

Phipps General Store is one of many traditional music venues on the Blue Ridge Music Trails of North Carolina. Consisting of 29 counties in the western third of the state, the trails are divided into six regions. Ashe, Wilkes, Watauga, Alleghany and Caldwell counties comprise the Southern Appalachian region.

People who visit the Phipps store to hear traditional mountain music also appreciate the surrounding rolling countryside. “This is such a great setting with a real country store,” says Gary Poe of West Jefferson. 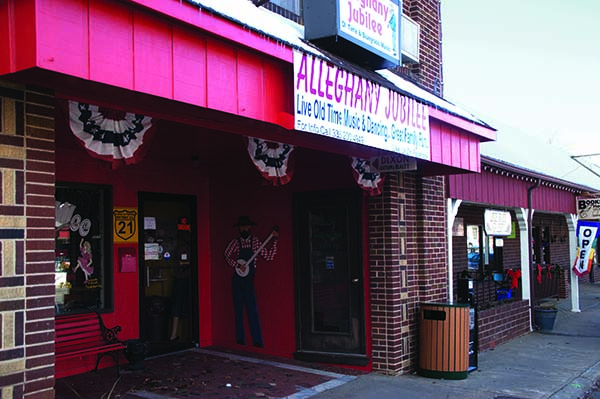 For traditional old-time mountain dancing, head to the old Sparta Theatre in downtown Sparta. Every Tuesday and Saturday night, the theatre hosts the Alleghany Jubilee.

On a recent Saturday night, participants chat with friends and sit in the few remaining theatre seats and folding chairs along the wall. Before the music starts, women change from their usual footwear to white shoes with steel taps on the bottoms.

“This place has great music,” says Paula Faulk of Wilkes County. “It is one of the few places where you can flatfoot in the area.”

The Crooked Road Ramblers start at 8 p.m. sharp, playing an old-time tune. Not long after that, several people head out on the dance floor and begin rhythmically shuffling around in pairs. As the dancers continue flatfooting, the tap-tap-tap of dance shoes vibrates throughout the room.

Later in the evening, more people crowd onto the dance floor to do the mountain two-step, the Alleghany shuffle and other traditional dances. 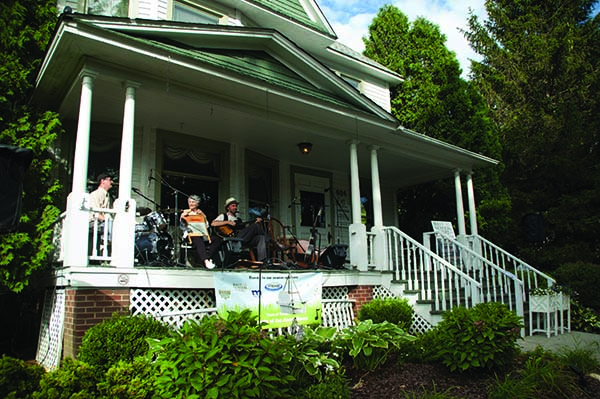 During the summer, you can hear traditional, blues and country music on Friday nights at the Jones House Community Center situated on a hill overlooking downtown Boone. People sit on blankets and in chairs on the lawn and listen to musicians playing tunes on the wide front porch of the historic home.

“The free concerts give people an opportunity to hear local and regional musicians in the heart of Boone,” says Mark Freed, cultural resources coordinator for the town of Boone.

On Thursday evenings, the town hosts old-time jam sessions. Musicians from the area gather in rooms on both floors of the two-story house to play fiddles, banjos, guitars and other traditional instruments. In warm weather, they spill over onto the front porch.

The jam sessions attract local musicians like Deborah Jean Sheets, Mary Greene, Rick Ward and Cecil Gurganus. Since the Wautaga County Junior Appalachian Musicians program holds its classes in the Jones House, it is not uncommon to see musicians from three generations jamming in a single session. The beauty of the event is that every week is different. 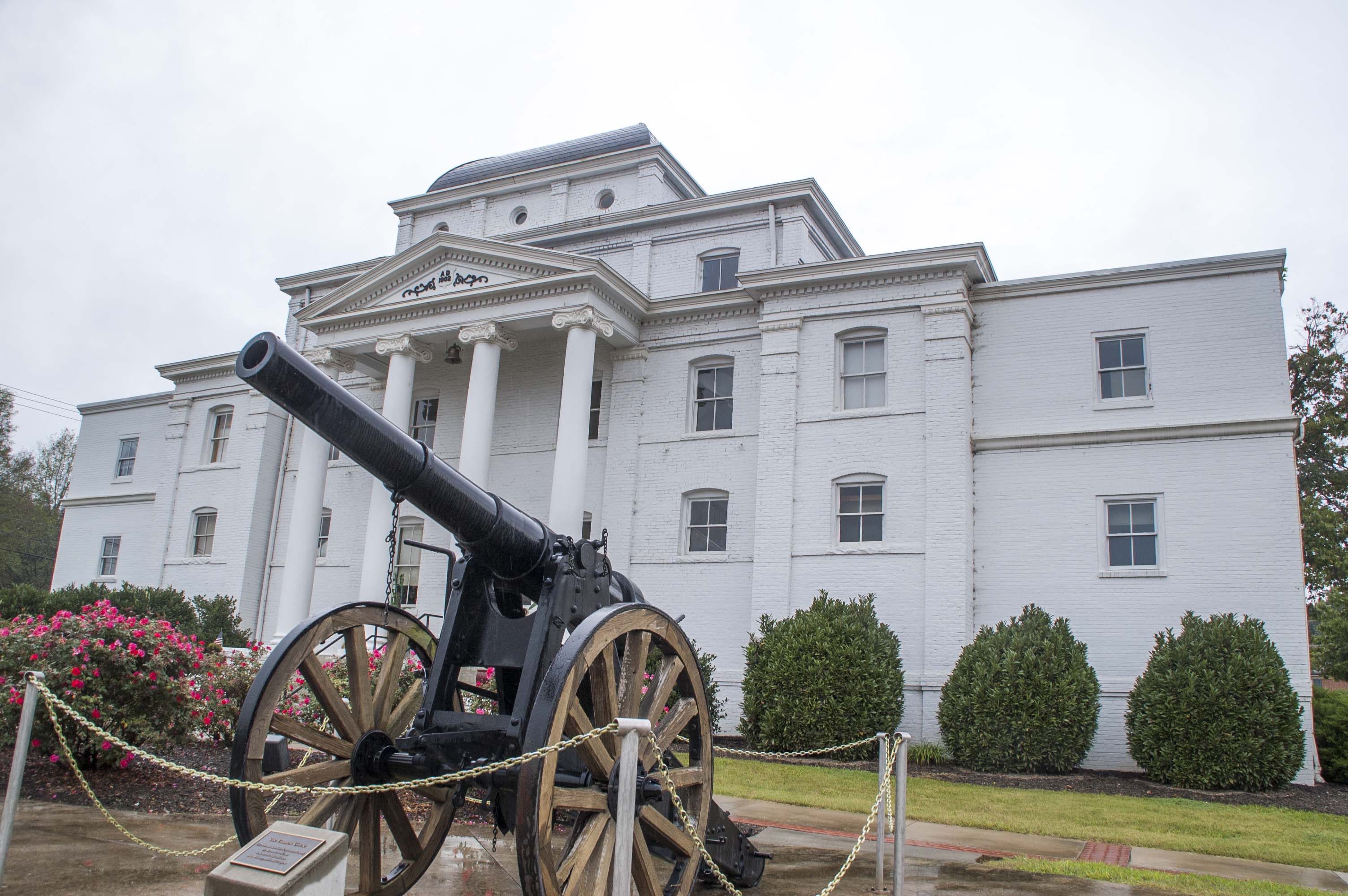 Besides musical venues, the Blue Ridge Music Trails of North Carolina features other attractions, including the Wilkes Heritage Museum in Wilkesboro.

Housed in the old Wilkes County courthouse, the museum is home to the Blue Ridge Music Hall of Fame. Climb up the stairs to the old courtroom on the second floor to see color photos of Hall of Fame winners Doc Watson, Earl Scruggs, Jim Lauderdale, Arthur Grimes, Jim Brooks, George Hamilton IV, Dr. T.R. Bryan and others.“In this one room, you can trace the roots of bluegrass music,” says Jennifer Furr, museum director.

In the next room, you can watch a video of Blue Ridge Music Hall of Fame inductees. There also is a variety of memorabilia from past inductees, including David Holt’s colored block shirt, William “Oliver” Swofford’s leather case and Clarence “Tom” Ashley’s guitar.

Downstairs, there is an array of artifacts, including Junior Johnson’s first racecar, seats from the North Wilkesboro Speedway and pottery.

Ann Green and Ven Carver have a vacation home in Ashe County and are members of the Blue Ridge Electric cooperative.