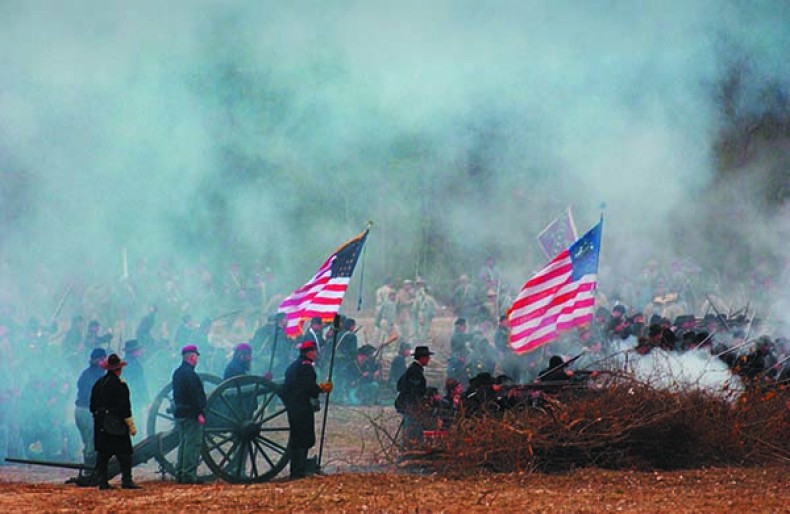 The Battle of Bentonville 150 years ago will be re-enacted Saturday and Sunday, March 21–22 at the state historic site in Sampson County. It will be the largest event of the Civil War’s sesquicentennial commemoration in the state. For tickets: (910) 594-0789 or 150thbentonville.com.

March was a sad month in North Carolina 150 years ago. Weary citizens and soldiers saw the final blows in the War for Southern Independence with the South on the losing side.

You can visit and weep (or rejoice or rage) at a number of North Carolina sites that saw action in March 1865. They are marked by Civil War Trails signs, N.C. Highway Historical Markers, privately preserved sites and major historical attractions (civilwartraveler.com).

Union Gen. Sherman, brilliant and ruthless, led his army on his Carolinas Campaign in March, the final leg of his aim to break the military and morale of the Confederacy. After burning South Carolina's capital, Columbia, Sherman sent some 60,000 men in three wings into North Carolina the first week in March. Acknowledging that the state was the last to secede, Sherman at Laurinburg, March 8, told the men to behave "moderately and fairly" with North Carolina citizens. Not many troops compiled, however, as "Yankee brutes" burned and looted their way to Goldsboro where they planned to cut the Confederacy's railroad lifeline once and for all. 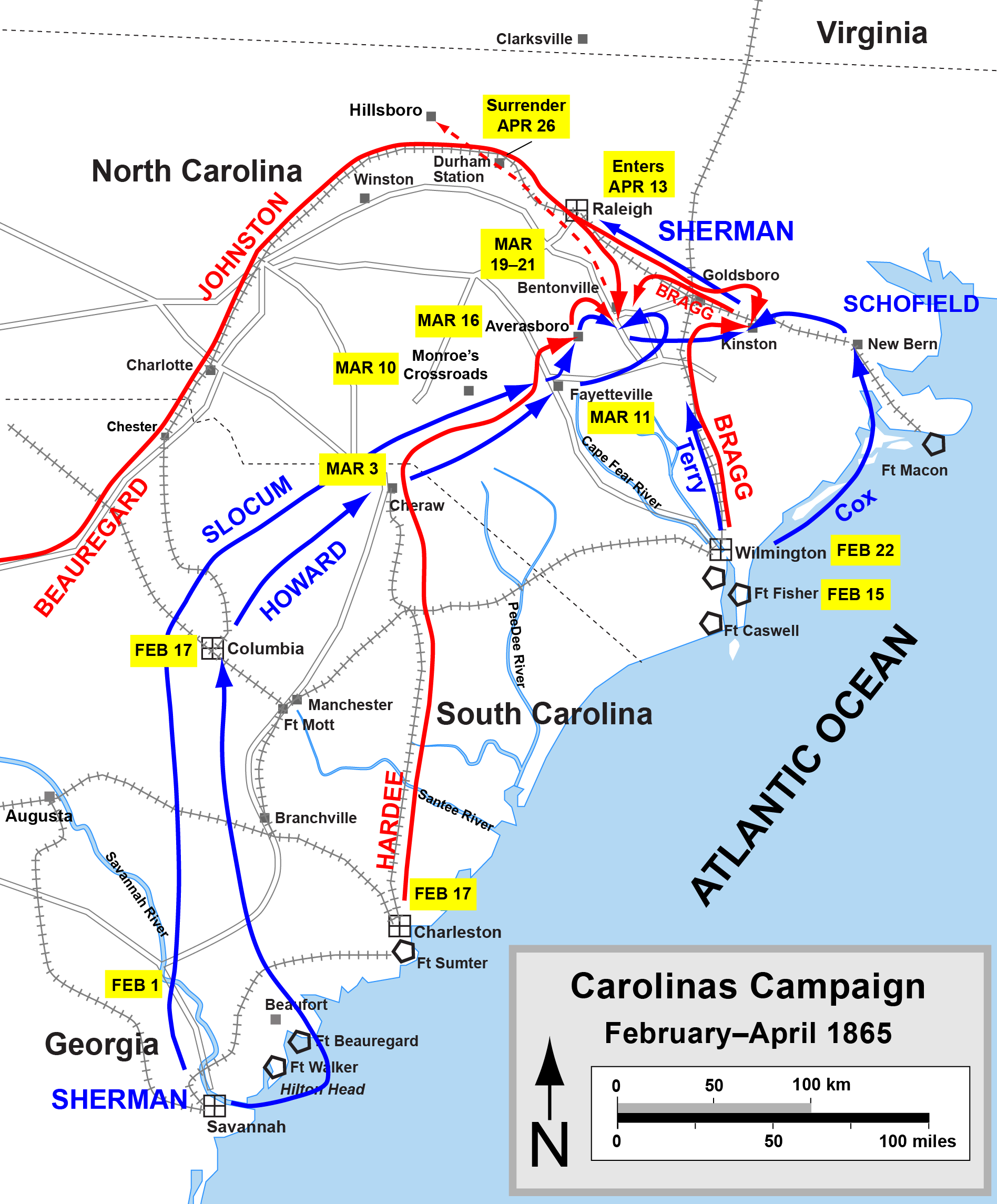 Follow their path by taking Hwy. 401 outside Laurinburg to Fayetteville, where Yankees destroyed an arsenal, set fire to the newspaper office and fought some Rebels near the famous Market House (it survived). The Museum of the Cape Fear recounts the visit (ncdcr.gov).

Hwy. 301 north heads to Averasboro, just south of Dunn, where the Averasboro Battlefield Commission (averasboro.com) has preserved the site where on March 15–16 Sherman's troops faced the first sustained resistance on this campaign. It allowed Gen. Johnston's Confederates to plan a larger defense at Bentonville.

Follow Hwy. 55 out of Dunn to Newton Grove, then north on 701 to Bentonville Battlefield, a state historic site (nchistoricsites.org). In rainy conditions, Confederate troops under Gen. Johnston outwitted the Yanks here in what would be the final military stand of the war, and the largest on North Carolina soil, ending in defeat. Moving on to Goldsboro, Sherman's troops, many in ragtag condition, were accompanied by liberated slaves, wagons and animals. They regrouped to 90,000 strong, chased off the Confederates, and began their march to Raleigh.

Earlier, on March 8, some 12,000 Union troops from New Bern, including those who had laid waste to Wilmington, advanced on Kinston aiming to meet Sherman. Heavy fighting at Wyse Fork took more than 2,600 casualties on both sides. On March 12, the Grays destroyed their steam-powered ironclad ram CSS Neuse to prevent its capture. See a full-sized replica here today (cssneuseii.org).

On March 28, Union Gen. George Stoneman and some 6,000 cavalrymen stormed into the state at Watauga County and met resistance in Boone. Their objective was to destroy railroad lines, which they did, terrorizing the locals along the way. They also aimed to free Union prisoners at what had become a shameful prison death camp at Salisbury. They reached and burned the abandoned Salisbury Prison in April. There's a U.S. National Cemetery here that tells the sad story (cem.va.gov).