A museum dedicated to “The Dukes of Hazzard”

A museum has opened in Rougemont that pays tribute to a fondly remembered TV show, and fittingly, a good ol’ boy created it. Stacey Harris grew up near the Orange County Speedway and is kin to local stock car drivers. A member of Piedmont EMC, he lives in Rougemont and has been working on exhibits at the Museum of Life & Science in Durham for 26 years. Last year the craftsman opened a museum of his own.

Click to see a video about Stacey Harris and the Boars Nest.

It started was when Harris and his wife went to the Hazzard County Homecoming in Sperryville, Va., in 2013. There, he got to meet actors Catherine Bach (Daisy), Ben Jones (Cooter), John Schneider (Bo) and the late James Best (Rosco). “It was kind of exciting, it really was. They were really nice people, too. It got me inspired to do this.” 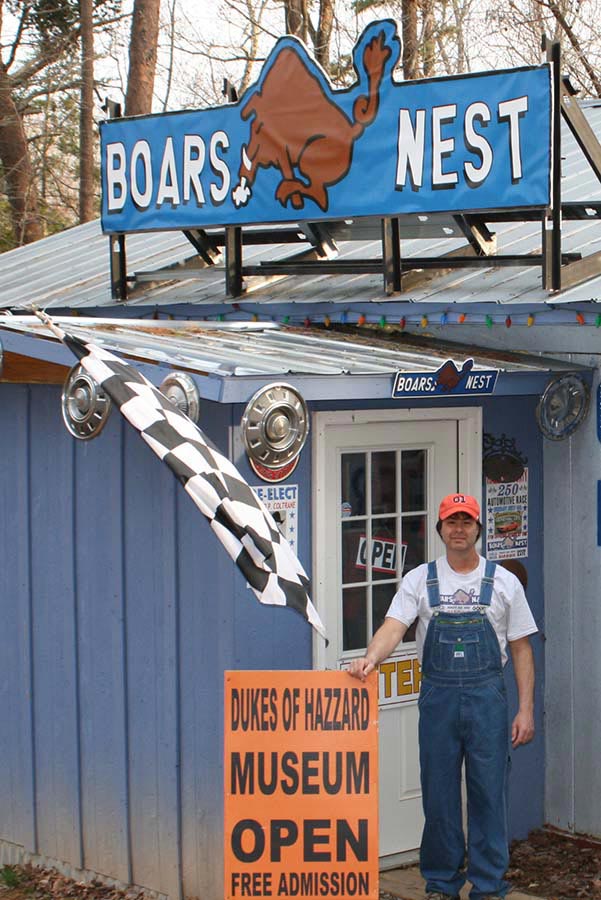 Open on Saturdays from “warm spring” through Oct. 3. It’s best to check the Facebook page (Boars Nest A Dukes of Hazzard Museum) or call before you go. Or, the museum is open when the orange 01 flag flies out front. Admission is free (donations accepted).

The hit TV comedy ran from 1979 to 1985, and starred two buff, Southern cousins named Bo and Luke, who sped and regularly jumped into an orange ’69 Dodge Charger called “The General Lee.” The two were justice seekers who worked to foil corrupt deeds by county commissioner Boss Hogg and sheriff Rosco P. Coltrane, but Bo and Luke managed to get in trouble on their own as well. They were assisted by their father-figure Uncle Jesse and knock-out cousin Daisy Duke, whose tight shorts could be described as a supporting actor in their own right.

Those who visit will enter a recreated Boars Nest (a restaurant/tavern in the series). There’s a pool table and a rebuilt 1969 Dodge Charger (set to become a replica of “The General Lee”) and souvenirs such as lunch boxes and posters. Adding to the atmosphere are autographed photos, a Rosco-like uniform, license plates, hubcaps, highway signs and old soda pop and moonshine bottles, plus Waylon Jennings singing from the jukebox. You can play a “Dukes of Hazzard” racing Xbox video game, or race cars on a 15-foot slot car track, or race the other two eight-foot Hazzard-themed tracks. Harris, who is also an electric bicycle dealer, has creatively repurposed materials. A TV sits atop a stack of stock car tires and his all-LED lighting includes a light strung around hanging Coca-Cola crates to illuminate the pool table.

More than 500 fans have visited since the 2014 opening, and Harris says their smiles are his pay. He hopes his Boars Nest will become a local gathering spot. Visitors are welcome to share memories out on his deck overlooking a creek and enjoy snacks from a small gift shop.