Life among the rural rich and famous, as well as the regular people of Duplin County 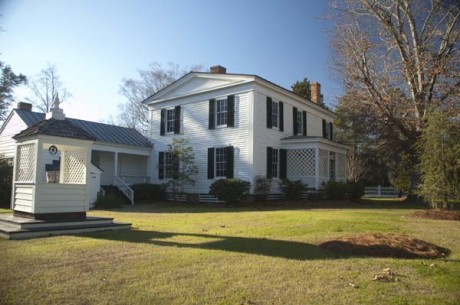 As soon as you step inside the spacious entrance hall at Liberty Hall in Kenansville, you get a glimpse of 19th-century plantation life in Duplin County.

Built in the early 1800s by Thomas Kenan II, the Greek-revival style house has the original heart pine floors and 95 percent of the original windowpanes, according to JoAnn Stroud, the home's curator. "As long as the Kenans lived here, there was no electricity or indoor plumbing," she says.

The entrance hall features a parrot wallpaper in shades of blue, green and red on a blue background. "It is based on an original design," says Stroud.

To the right of the hallway, the music room is furnished with burgundy draperies, the original piano and the sheet music of Annie Kenan, the home's last resident. "Annie was an accomplished pianist and played at the Presbyterian Church."

Across the hall, in the library, the men drank brandy, smoked cigars and conducted business transactions.

Meanwhile, the ladies escaped to the Victorian-style parlor and sipped tea. The parlor also was where Mary Lily Kenan married Standard Oil scion Henry Flagler in 1901. Dubbed the wedding of the century, the affair attracted the nation's social elite, who traveled by private train and horse-drawn carriages to attend the wedding. 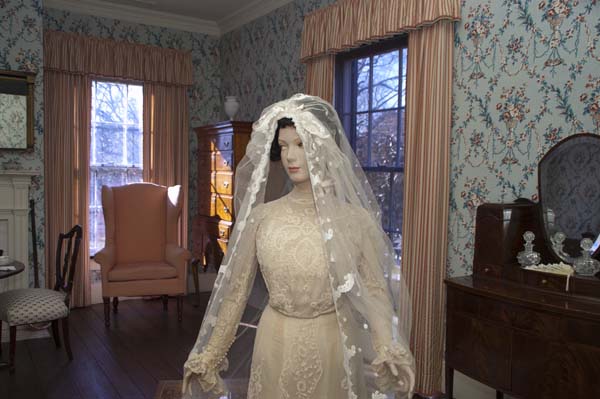 Upstairs, Mary Lily's off-white wedding dress, which is made of chiffon over white taffeta and Brussels lace is displayed in a lady's bedroom. Even though Mary Lily was petite, weighed only 95 pounds and had an 18-inch waist, she was quite buxom, says Stroud.

During the cold months, Annie Kenan and her three siblings ate their meals downstairs in the winter dining room, which featured a fireplace equipped with warming shelves.

During the hot summer days, the family gathered in the summer dining room that had doors opening to the outside to catch cross breezes.

Designated as a Southern Historic Landmark, the restored Liberty Hall occupies several acres in downtown Kenansville. The 11-room, white-framed home is surrounded by a white picket fence. On the side of the house, there are several dependencies, including an overseer's cottage, a wine cellar and a bath house with a four-hole privy and corn cobs that were used as toilet paper. "The less prominent people usually had an outhouse with one hole," says Stroud.

For information about other lodging and restaurants, as well as Duplin County's famous wineries, visit the Duplin website: Duplin County Tourism, uncorkduplin.com or call (910) 296-2181.

The most charming outbuilding is Martha's cottage, which recreates a servant's residence. Filled with primitive country furnishings, the one-room home was heated by a fireplace. The children slept in a loft on pallets or simple mattresses stuffed with straw, corn shucks or other matter. "Martha was the chief cook," Stroud says. "She and her brothers chose to stay on the plantation after the Civil War. Their skill and dedication helped the Kenan family during the postwar years."

Walk across the yard from Liberty Hall and tour the Cowan Museum, which has more than 1,800 artifacts from early rural America, including an 18th-century copper ear trumpet used as a hearing aid. The museum also has an extensive collection of 18th and 19th-century household utensils, as well as a leather and iron ox blinder that has slits over the eyes. "Oxen could be ornery," says museum manager Donna Cowan. "Before the animals went into the field, the farmer put blinders on them."

On the museum grounds, there is a one-room school and other outbuildings. 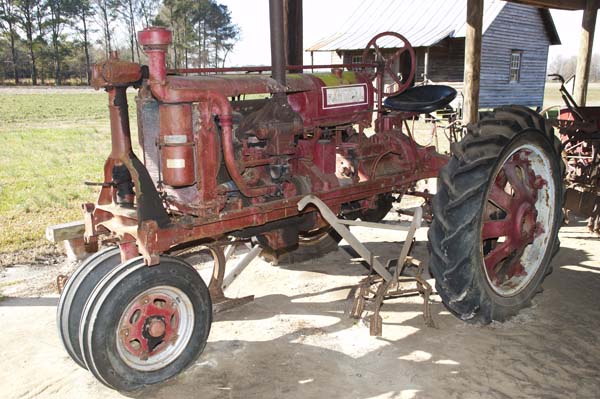 For a glimpse into early farm life in Duplin County, visit the Tarkil Branch Farm's Homestead Museum in Beulaville. Owned by the Fountain family, the museum is packed with family memorabilia, including period furniture, vintage sewing products, quilts and boys' faded sun suits. "Mama was an excellent seamstress," says Benny Fountain. "She made the sun suits out of feed bags."

Outside the museum, 11 vintage buildings depict the family's resourcefulness. Inside a three-room cabin, Fountain shows the kitchen, which had a wood stove with iron kettles. "They used a lot of iron objects to get warm," he says.

In the parlor, Fountain holds up a wooden baby box made by his grandfather. "He took the baby and the box to the fields and worked," he says. "This is where babies first learned to stand and hold the railing and wobble and wiggle."

As a tribute to the early days of electricity, a Four County Electric exhibit is set up in the hen house. The display features early electrical fixtures and gadgets, including light bulbs, a light fixture pulled with a chain, hot plate, fuse box, washing machine and fan. "We didn't get electricity on the farm until 1940," says Fountain.

Open Saturday 9 a.m.–5 p.m. and Tuesday–Friday by appointment or group reservation. To find out more about the museum, go to: www.tarkilfarmsmuseum.com; or call (910) 298-3804. Check the Web for admission fees. 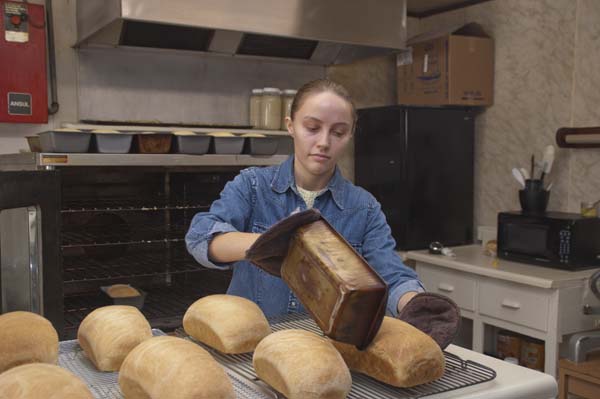 For homemade baked goods, go down Fountaintown Road from the farm museum to the Bulk and More Store. As you walk inside, you can smell the sweet scent of yeast. Run by the Mobley family, the store sells homemade sourdough bread and other baked goods.

Flour, grain, bakery mixes, rice and other products that are sold in bulk sizes line the shelves, including 50-pound bags of buckwheat flour, oat flour, spelt flour and cake flour. "Customers who want to buy in big bulk can call ahead and place an order," according to Valley Mobley.

The store also stocks a complete line of flavorings, candy chips, dried fruit, yeast and other baking items, as well as hand-rolled butter.

Ann Green is a writer based in Raleigh.