By Lynn House May 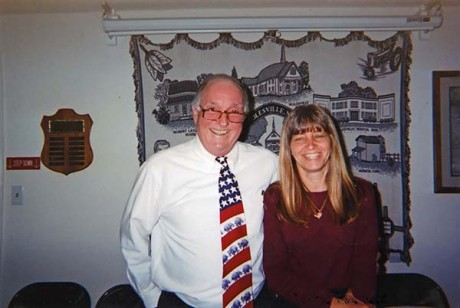 That is me with Joe back in September 2001. I worked at Rolesville as town clerk until April 2012. I retired from the town and it was the best job!

In April 1990 I went to work with the town of Rolesville, and by August Mayor Joe Winfree and the Town Board hired me as the town clerk. It was best job I ever had.

Mayor Winfree and I worked together in the two-room town hall for about 12 years. He introduced me to all 600 citizens (at that time), because he knew everyone. If he didn’t know someone, he would soon introduce himself, find out their life story and welcome them to Rolesville.

Mayor Winfree — or “Joe” as everyone called him — was a hands-on mayor. I have seen Joe meet with all levels of government officials, meet with Wake Electric staff, help a citizen cut up and haul off a tree after a storm, deliver garbage carts, ride on the garbage truck to count carts, read water meters, check on homebound citizens, and help with Rolesville Fire Department barbecues. Once he worked the pooper-scooper so that horses could be in the town’s parade.

Joe loved his daughter Sissy (aka Ashlyn), his son Scott and his wife Rose. He told me how they found Rolesville while out for a drive from Raleigh and knew they had to move to the small town north of the city. Joe also loved his dogs, Abby and Gabe. It was not unusual to see one of those big dogs lying next to Joe’s desk at town hall.

I joked with Joe that he would ask anyone for anything if he thought it could help Rolesville. I told him sometimes people would give him what he wanted just to get rid of him, and he would just throw back his head and laugh. Once Joe and a co-worker put a “For Rent” sign in the yard of my newly built house, and we laughed because someone called to rent it.

I have fond memories of working with Joe those 12 years before he moved to Lansing, Ashe County, to become a “mountain man.” He loved his home there, too. Even though years and miles kept him away from Rolesville, he is remembered for the many improvements he helped bring to the town. Joe died August 16, 2014, at his home in the mountains.

I will never drive through Rolesville without imagining him there at the old town hall, the Rolesville Fire Department, the ballpark, cutting grass at his home on South Main Street.

Lynn House May lives in Castalia and is a member of Wake Electric.