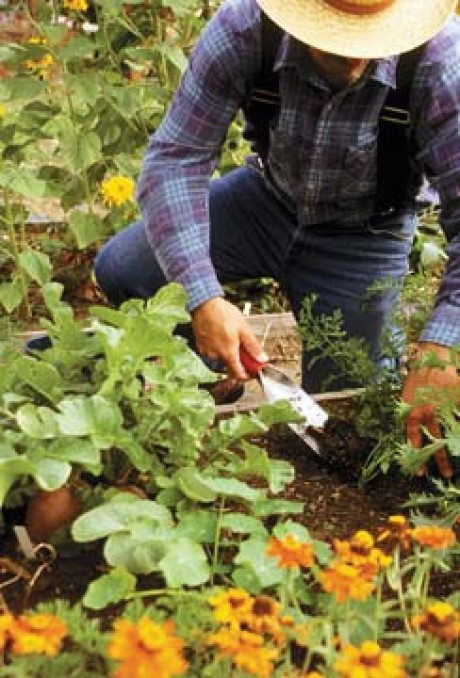 A misconception about gardening is that you should never plant during summer when it's hot. But this only applies when transplanting or dividing.

As daily temperatures rise, you still can continue to fill the empty spaces in your garden with potted perennials, annuals and shrubs. Any shock from transplanting is essentially eliminated because you didn't actually dig up the plant.

One of the great things about planting in summer is that most plants are in their full flush of growth—allowing you to see its form and the color of its foliage or flowers.

Anytime a plant goes into the ground, you should match the plant's growth habits to the garden site. This is true in any season, but especially in summer when temperatures are more extreme. A plant that prefers part shade but tolerates full sun has a better chance of surviving in full sun if it's planted in spring rather than summer. That way the roots have enough time to establish themselves before the heat of summer erupts. When planted in full sun on a hot summer day, the plant might wilt before it has a chance to situate its roots. In this case, you still can plant in summer by giving the plant what it prefers—a partly shady location.

When planting in a sunny location, another way to protect the plant is to provide temporary shade for the first week or two using a light-colored umbrella or shade cloth.

For best results, always plant on a cloudy day or in the cooler temperatures of the early evening to minimize weather-related plant stress.

Give your plants the advantage over summer's heat by applying a 2- to 3-inch layer of organic mulch—such as compost, shredded leaves, cocoa bean hulls or bark dust—immediately after planting. This will help conserve soil moisture and keep down weeds, which compete for water and nutrients whether your soil is loamy, sandy or clay.

Water new plantings once or twice with a dilute solution of fish emulsion or liquid seaweed to help them quickly settle into their new environment.

During the first week or so, you might need to water daily or every other day depending on the weather, soil type and plant's growing requirements. After that, it's important to keep the soil slightly moist until the plant becomes established in the garden. For most perennials and shrubs, that usually occurs after the first growing season.

The key is to water deeply and thoroughly to encourage a deeper root system.

Just about anything growing in a container can be planted in summer, though some plants stand up to summer's heat better than others.

An easy way to find new plants for the empty spaces in your yard is to divide certain perennials that already exist in your garden.

September is a great time to dig in and divide perennials, such as asters, chrysanthemums, daylilies, iris, liatris, rudbeckias, and ornamental grasses. Divide and replant perennials with vigorous clumps, barren or dead centers, and those whose flowers have become smaller or less abundant.

The steps are basically the same whether the plant grows from rhizomes, such as iris, has tuberous roots, such as daylilies, or are more fibrous, such as rudbeckia.

Dig up the plant on a cloudy day, keeping as much of the roots intact as possible. Remove any loose soil so you can see the crown and roots, then divide the plant into smaller clumps using a sharp spade or sturdy knife, discarding any dead centers to the compost pile.

Each division should have at least two to five vigorous shoots with ample roots attached. Cut back remaining foliage to half the plant's height, then immediately replant the divided pieces into their new location.

Any extras can be planted in potting soil in large pots and later given as gifts to friends and family.

Kris Wetherbee is a writer and gardener in Oregon.