Wreathmaking has become tradition for a Wayne County family 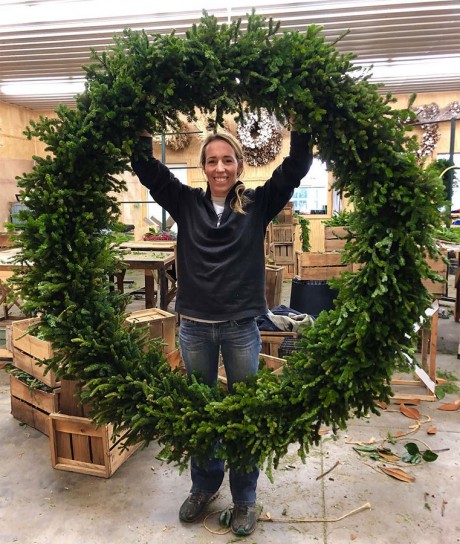 Go big or go home! Kari holds this six-foot-wide wreath that took about 35 minutes to make, and requires two people to move it around the shop.

In late October, the fields surrounding Four Oaks, North Carolina, are exploding with cotton. It’s almost the end of the crop’s season, marking a short lull for local farmers. But for the Sanderson family, things are just about to crank up.

The family owns and operates Sanderson Wreaths & Garland, a Wayne County business that began as a Christmas tree farm and has since transitioned to creating custom wreaths and garlands. The wreaths — sold year-round, including at the State Farmers Market in Raleigh — are crafted from cotton burrs, cotton bolls and corn shucks.

The family’s specialty, however, are their seasonal green wreaths and garland, made of Fraser fir, boxwood, magnolia, eucalyptus, cedar, blue ice, nandina and cypress. All of the materials for the handmade creations are grown by farmer and Tri-County EMC member Kenneth Sanderson, who started Sanderson Wreaths & Garland more than 30 years ago with his wife, Vickey. 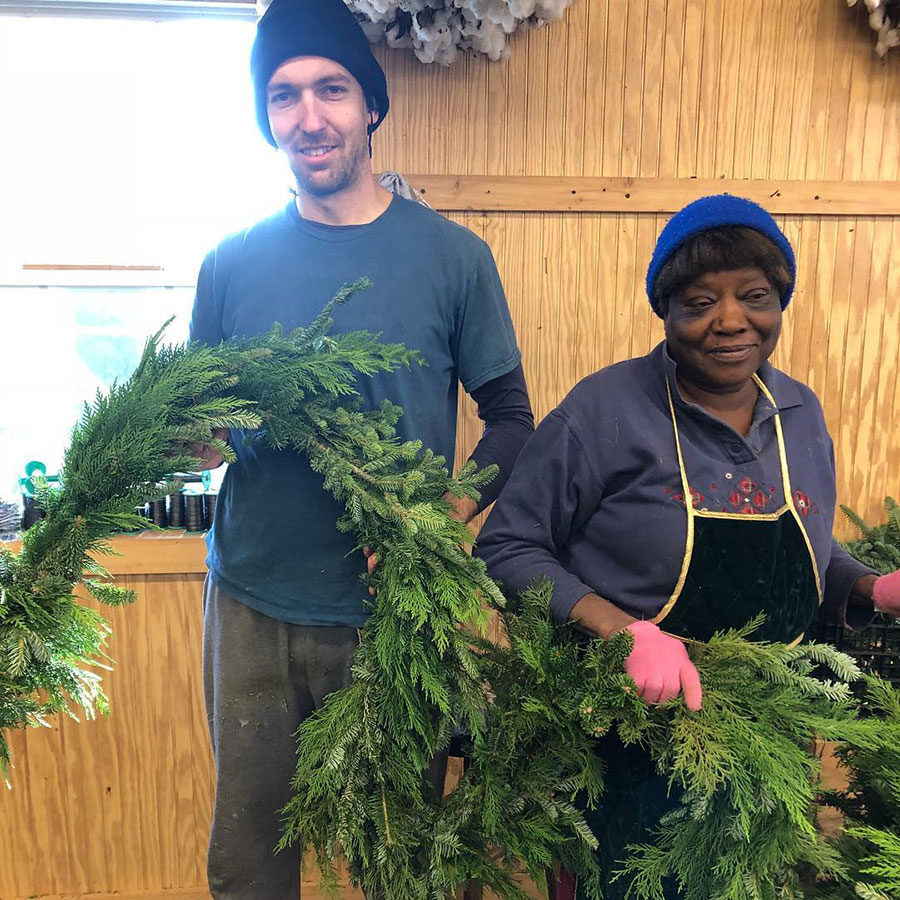 “When we started, it was mostly trial and error. The main business was selling trees, and we just thought we’d try making wreaths. We were making them in the front room of our house with four little ones running around,” Vickey says. “We sold to people locally and we had good luck selling in Raleigh. It all just kind of took off. We had to expand.”

In the family business’ earliest stages, the couple was simply looking to make some additional money to help support their four children, including saving to put them all through college.

The Sanderson children have ushered in a new era for the family business. Not only do they help run daily operations, but they’ve helped their parents expand. Several years ago, the family built a new facility to house their operations. The space includes a stylish country chic storefront, stocked with the family’s eucalyptus and cotton wreaths, along with other local products. Thanks to Kari, the family now also sells their products online. 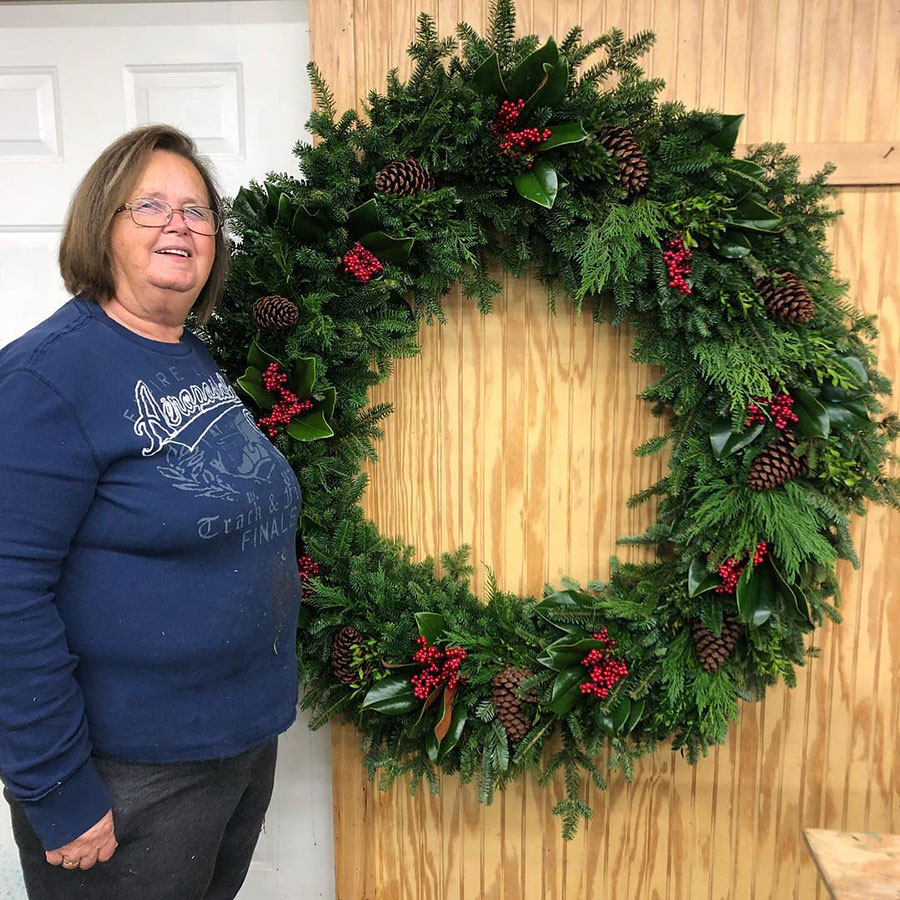 Meet one of the makers: Mrs. Penny has been making wreaths for Sanderson Wreaths & Garland for more than 20 years.

“I wouldn’t say I’ve taken over the business, but every year I get more and more involved,” Kari says, noting that she pushed the family to begin doing online sales through their website and through Etsy, an online marketplace. “I hope one day to take it over completely, but I love working together. I don’t even know if it’s possible without all of us pitching in. We’ve never done it any other way.”

During the months of November and December, the family’s schedule is nonstop. Despite having a toddler and a newborn, Kari will work 12-hour days Monday through Friday alongside her family and a trusted crew of about 15 seasonal workers.

The extra-large wreaths take about 30 minutes to create, while the regular-sized ones take about 15 minutes with the help of wreath machines. But there are also online orders to fulfill, not to mention the State Farmers Market every weekend.

“There are no off-days for that month and a half during the holidays,” Vickey says. 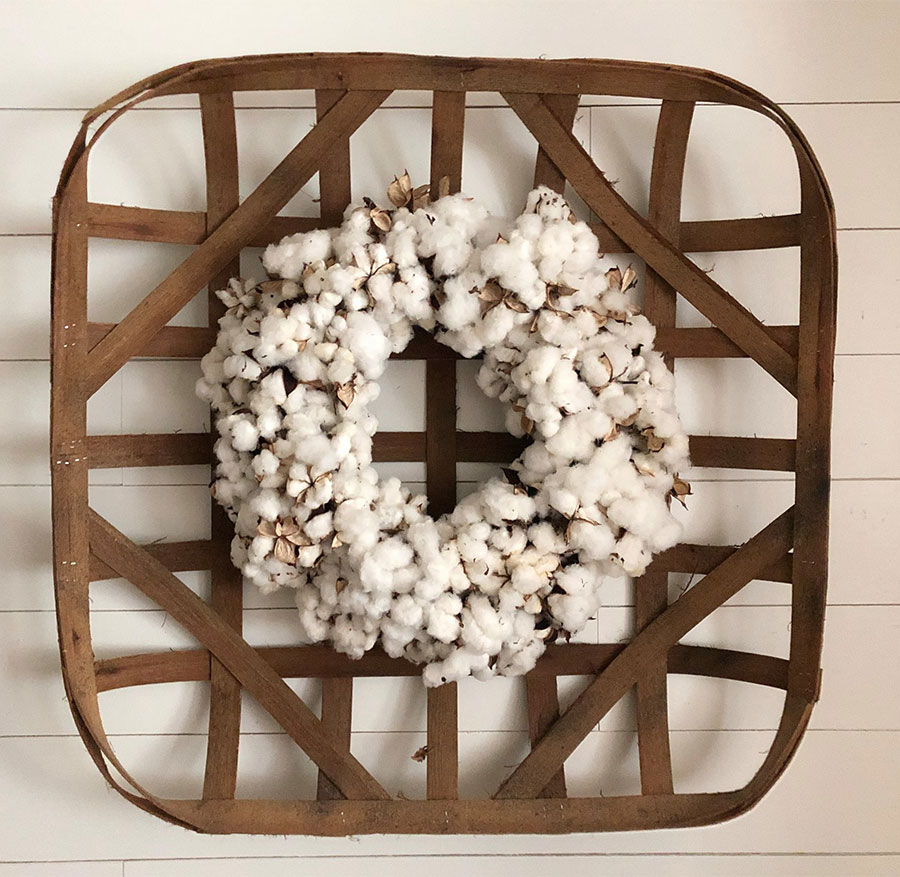 The preparation for the busiest part of the year begins months in advance, though some of the work is year-round. Kari says she spends time making Christmas bows for the wreaths in February and March. In July, they make ornaments. There’s also the growing. Kenneth grows cotton, corn, eucalyptus and various pine trees on the family farm throughout the year, which is harvested and then cut into smaller pieces right before wreaths and garland are made.

On this warm October day, Kari’s toddler walks around the processing room before being whisked off by Vickey, a former schoolteacher. Kari looks at her newborn balanced on her hip and says it’s her dream for her children to continue the tradition of Sanderson Wreaths & Garland.

“I learned this from birth, and I guess they are, too,” Kari says. “There’s just something really special about doing this work together and keeping the tradition alive.”

To learn more about visiting the farm and purchasing their wreaths, visit the Sanderson Wreaths & Garland facebook page.