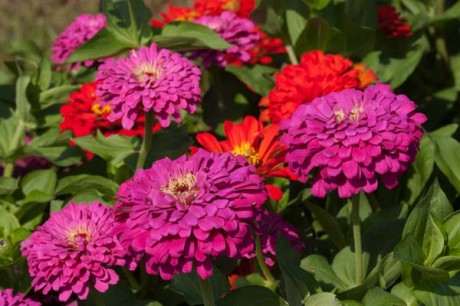 The sooner the soil warms up, the sooner annuals such as zinnias will have their day in the sun.

Ready to plant your garden? Not so fast. . .

Even with North Carolina’s temperatures approaching short-sleeve weather, dirt is denser than air, meaning it takes soil much longer to warm up in the springtime. So if you want to plant heat-loving summer annual vegetables and ornamentals early in the growing season, plastic will help start them sooner.

A layer of plastic film covering garden ground will act much like a greenhouse by absorbing heat from the sun during the day and preventing its loss at night. Black plastic does a good job of warming the soil and, because it blocks light, also discourages weeds.

After you have turned over the garden’s soil for spring plantings — and added fertilizer — cover it with a single layer of the plastic, burying the corners in dirt. Poke small holes in the plastic to allow rain to drain into the earth. Rain will not only water the garden, but, by way of the droplets, the mild temperatures from the early spring showers will reach deep into the soil, warming it further.

Give the plastic two weeks or more to raise the soil’s temperature. Then, cut 4-inch wide X’s into the film and set your plantlets into the dirt underneath.

By the middle to end of May, the plastic will have done its job in starting young plants off early, and the additional heat generated by the film won’t be necessary — nor welcomed — during the hot summer months. Rather than removing it, simply poke more holes in the plastic to allow air and moisture to pass freely through, and pile a few inches of organic mulch such as dried leaves, hay or compost on top. Organic mulch will prevent the soil from becoming too hot, inorganic plastic sheets will stop weeds, and both will help conserve moisture.

At the end of the growing season, while clearing out spent annuals, simply pull the sheets up, toss the plastic away, and at least tip your hat as a way of saying, “Thanks!” to this handy garden helper.

Having the blade on your lawn mower sharpened ahead of springtime lawn cutting season will result in two positive effects: (1) The mower will run more efficiently, thus use less gas and cause less air pollution; and (2) the blade will cleanly cut rather than tear grass, which could leave ragged ends and invite diseases. If your blade is pitted, dinged and dented from years of encounters with roots and rocks, replace it. Although professional mower mechanics offer this service, an experienced backyard handyman won’t have a hard time taking off a blade for sharpening or replacement, but remember to be safe and always remove the mower’s spark plug first!