Plus garden to do's for October & November 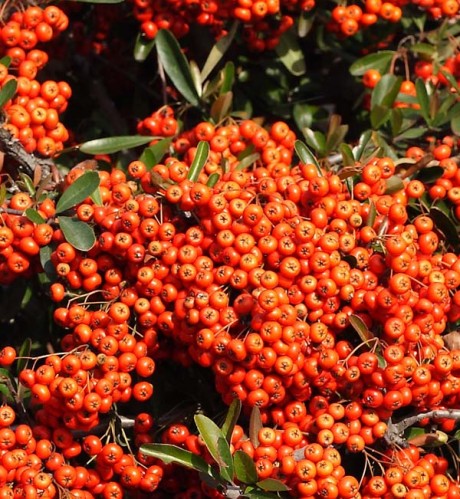 Whether showing off hot oranges or simmering reds, the mature berries of pyracantha are hard to miss in the fall. Its sharp barbs are also hard to miss, hence the alternate name “firethorn.”

Pyracantha is a well-suited shrub for Carolina Country conditions. Although it is best to plant this ornamental in well-drained soil, it will still do fine in heavy clay. After becoming established, it can also withstand hot, dry conditions. And for the best berry production, it demands full southern sun.

Some pyracanthas grow aggressively, reaching heights beyond 15 feet and spreads of 10 feet, but they can be tamed by regular prunings. To control their size, cut them back lightly in late fall — a chore that also provides fresh, colorful berry stems for indoor holiday arrangements. As an alternative, prune during the spring bloom to avoid cutting off all the flowering berries-to-be.

Lace bugs and spider mites can occasionally be a problem, but a few applications of insecticidal soap will keep these pests at bay.

Diseases might also sporadically crop up — two in particular are scab and fire blight. Scab can put a bad case of ugly on pyracantha. Infected bushes have off-green, sooty spots on the foliage, and the leaves eventually turn yellow and fall off, while the berries become covered with lesions and blacken.

With fire blight, new growth withers and turns black. If the disease advances far enough down the limbs, berries will also darken. One way to control this disease is to prune out the infected areas.

Prevention in the form of resistant cultivars is another way to keep these diseases away. Good choices include ‘Mohave’, ‘Rutgers’, ‘Shawnee’, ‘Red Elf’, ‘Apache’, ‘Teton’ and ‘Pueblo’.

After autumn’s leaf fall, clean the water garden, but don’t be too thorough. Leaves, sticks and other floating debris can be removed, along with replacing about 20 percent of the existing water with fresh water, but a complete cleaning removes algae and beneficial microorganisms that have built up in the pond, which would damage the biological balance that makes the water garden work so well as a small ecosystem.