Plus garden to do’s for April & May 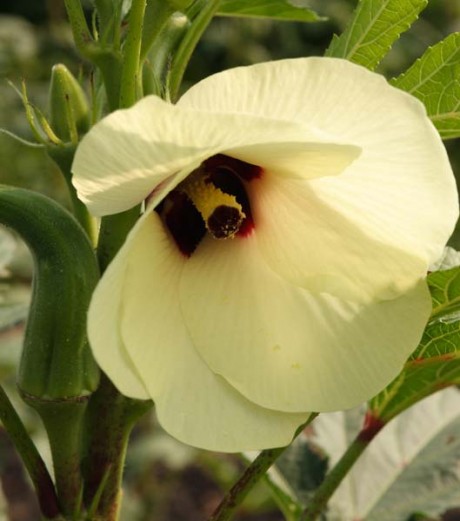 Growing okra is a Carolina tradition, but why confine it to the veggie patch? Okra is a rather handsome plant in foliage and especially flower, as a member of the highly-ornamental Hibiscus family. Just the sight of its beautiful blooms should be a clue to the decorative possibilities of this vegetable in the landscape.

Some okra selections even have additional ornamental attributes. The short stature and tropical-looking leaves of 'Lee' (order seeds online from Park Seeds) and 'Cajun Jewel' (Southern Exposure Seed Exchange) make them candidates for being snuck creatively into perennial beds or flower borders.

Like to plant seeds in the garden but don't enjoy the backaches that result from this spring ritual? If bending over is becoming a literal pain, from a hardware store, buy a 4-foot piece of PVC or galvanized metal pipe that is about 1 inch in diameter. While standing up, use the pipe to poke holes into well-prepared soil and then roll a seed down the pipe into each hole.

And if you want to see red — in a good way, of course — grow an okra variety such as 'Burgundy' (Southern Exposure Seed Exchange), a flashy floozy with red stems and leaves streaked in crimson, matching the dark red of the flavorful pods. 'Red Velvet' (Burpee) closely compares to 'Burgundy'. Compact in size but just as pretty — and productive — is 'Little Lucy' (Reimer), a 2-foot okra sporting scarlet pods that are as pleasing to the eyes as they are to the taste buds.

Mixing okra with landscape plants does come with one caution — make sure that any pesticides sprayed on the plants are cleared for use on the edible pods.