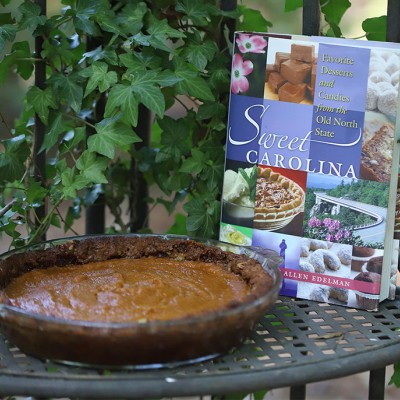 In her book, “Sweet Carolina: Favorite Desserts and Candies from the Old North State,” Foy Allen Edelman compiled regional food recipes from residents of every county in the state, including the history behind them. This recipe, shared by Carolyn Goff of Harnett County, comes with a story of what makes the pie so magical.

“My first remembrance of cooking was when I was five years old standing on a stool,” Carolyn Goff told me. “Mama tried to teach me to make biscuits. My daddy said that if you opened up the oven, my mama’s biscuits would just fly out they were so light, but I wasn’t cut out for it. I could make cookies, mostly drop cookies, and I peeled potatoes. Mostly I cooked sweets. I cooked cakes when I was in the sixth grade. James Edward [her future husband] was in the sixth grade, and I had two more boyfriends in the sixth grade. James Edward and I were sort of sweethearts, but if I got mad with one, I had an extra. I was like an old Hudson car; I had an extra [tire]. One of my boyfriends would bring the sugar, one would bring the eggs, and one would bring the flour, and then I’d furnish the milk. When I got home, I’d make the cake, and the next day I’d take the cake to school, and they’d eat it. Pretty soon everybody wanted me to make cakes."

“I was working while James Edward was going to college. I was getting kind of skinny and had lost my appetite. Some of the women I worked with in a shipping department of a factory would bring something in [to eat] all the time. A woman I knew, Miss Ollie Rankin, brought a pie one day. I’d known her ever since I was a baby. She told me she wanted me to eat some of her pie, that it was like magic. She said it would do me some good. I tasted that pie and I said, ‘Miss Ollie, what is that?’ She said, ‘I told you, it’s magic. Do you want another piece?’ I said ‘Yes, M’am, I do.’ She said, ‘Well I tell you what, Carolyn, you can eat the whole thing if you want it.’ And I felt like it, and I got my appetite back. I think the reason some people don’t like pumpkin pie is the crust. I use a crumb crust.”

Carolyn’s version is named for her son, Jamie.

From “Sweet Carolina: Favorite Desserts and Candies from the Old North State” by Foy Allen Edelman. Copyright © 2009 by the University of North Carolina Press. Used by permission of the publisher. uncpress.unc.edu