Over the years, electric cooperatives have awarded nearly $9 million in grants to teachers, benefitting some 1.6 million students 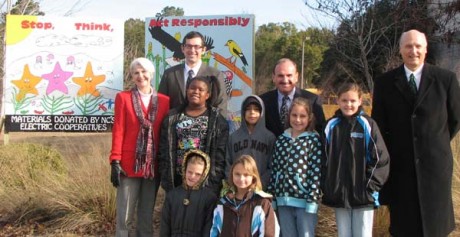 It all began in the early 1990s with one dedicated employee at Brunswick EMC, the electric cooperative based in Shallotte. Judy Gore, vice president of customer services now in her 38th year with the cooperative, pioneered the Bright Ideas grant program after witnessing a transaction at a local K-Mart.

"I was in a hurry, and the woman ahead of me had all these items," said Gore, who found out the woman was a teacher using her own money to buy materials for a class project. "I learned that she gave back a significant portion of her paycheck because she wanted her students to have fun and learn at the same time."

Gore and her colleagues at Brunswick EMC had been working to create a new program that would touch the lives of students in their service area, and Judy's interaction with the teacher sparked an idea — to help educators fund projects without having to dip into their own pockets. In May 1993, the first "Partnerships for Solutions" mini-grants of $250 were awarded by the cooperative.

The rest of North Carolina's electric cooperatives recognized the value in what Brunswick EMC was doing for local teachers, and in August of 1994 the statewide Bright Ideas education grant program was born.

"We're especially proud of the impact of the Bright Ideas grant program, which has received national recognition," said Robert W. "Chip" Leavitt, Jr., CEO and general manager of Brunswick EMC. "Bright Ideas has been a success from day one and is the cornerstone of our commitment to community. What started as a couple of $250 mini-grants has turned into very necessary financial support for teachers and schools who are in increasing need. Bright Ideas has grown to a statewide program awarding close to $9 million and impacting more than 1.6 million students, and it's still growing. That's quite a legacy from Judy Gore's initiative, and we're looking forward to the 20th anniversary in 2014."

Gore's coworkers agree that Bright Ideas is truly her legacy. "Judy has come to work every day for the past 38 years to make life better for those that Brunswick EMC serves," Leavitt said. "We thank her for her vision and dedication in creating a program that no doubt will have a lasting impact on generations of students."

In an era of budget challenges, partnerships between educational systems and corporate sponsors are more important than ever. In recent years, cooperatives in South Carolina, Georgia and Alabama have begun awarding Bright Ideas grants to educators in those states.

Gore said grant recipients are grateful for the support and appreciate the simplicity of the grant process. "The program shows respect for their work, their commitment to students and their time," she said.

She never imagined her mini-grant program would grow to have such an important impact in North Carolina and beyond. "We were just trying to do what was right, and I don't think we could have found a better program."

Teachers can apply for Bright Ideas grants of up to $2,000 from April–September. For more information, visit NCBrightIdeas.com.