A boy and a duck grow up together. 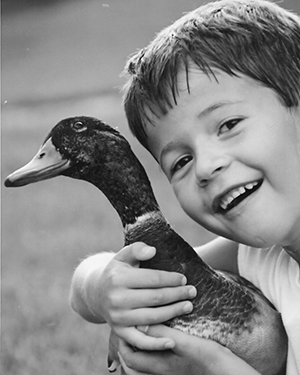 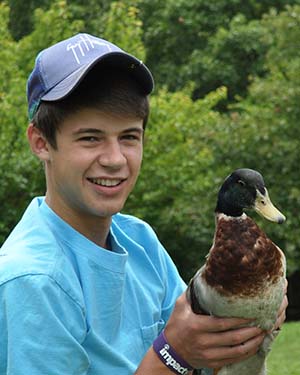 After Morgan Hobson's Forbush Elementary kindergarten class in 2002 hatched some duck eggs in an incubator, his parents, Mark and Melissa Hobson, let him choose two ducks to take care of until they were large enough to release on their Yadkin County pond. At that point, 5-year-old Mo didn't know what kind of ducks they were or their gender. But he chose two and named them Donald and Daisy. He could tell them apart by their toenails: Donald's were orange and Daisy's were black.

Mark used chicken wire to construct a 10-by-10-foot lot and attached it to their barn. He added a small pool for the ducks to swim in. After he tended the ducks for a couple of weeks in a box in the basement, Mo moved Donald and Daisy to their new home that now included an old window air conditioner case as a shelter.

Every day Mo fed them duck food, grass and small bugs and let them out to play. The three of them bonded and became great subjects for Melissa's photography hobby. Mo taught the ducks to play soccer — his favorite sport — by rolling the ball between them while the ducks lunged for it and pushed the ball around the yard. Mo knew it would be hard to let them go, but that was the plan from the start: nurture them until they were big enough to release.

Eventually, Mo's choice for names fit. Donald became a beautiful male mallard and Daisy a female mallard, but with some peculiarities. "Daisy can't fly high like Donald," Mo told his parents one day. Some of her wing feathers were growing straight up. But the two ducks were definitely mates because, as Mo recalls, "Daisy would get very loud and upset until I left Donald alone, and she didn't like for Donald to be very far from her sight." Daisy laid a few eggs but only one hatched, and the duckling died.

When the time came for their release, the ducks followed Mo to the pond. He gathered Donald into his arms one last time while Daisy watched, quacking hard. Mo tossed him out over the water, then tossed Daisy out there, too. But Donald flew back and Daisy paddled right back to the bank. Mo tried to ignore them and walked up the hill toward home, thinking they'd eventually realize they were free. But Donald and Daisy would not be separated from their friend who had taken such good care of them. They returned to the only home they'd known. Mo tried several times to convince them they'd be happier on their own, but to his delight, they would have none of it.

One morning, Mo discovered Daisy missing. Something had dug under the wire, and there was no trace of her. But Donald is still strong and playful 11 years later, and he loves to have fresh water in his pool each day.

Mo is now a junior at Forbush High School, playing on the varsity soccer team, running track, and thinking about college. But he still cares for Donald, faithfully cleaning his lot with a hose, feeding him, letting him out to play in the yard. His advice for anyone wanting ducks for pets: "Keep them in a good, safe environment, and if they want to be free, let them, but also let them get used to the environment first, to see if they can handle it."

Ask Mo if he thinks Donald misses Daisy: "He misses her. But he's happy to be free of the nagging."

The Hobsons live in Yadkin County and are members of Surry-Yadkin Electric Membership Cooperation.

Sandra Miller is a freelance writer in Yadkin County and author of “When Mountains Move,” a memoir.