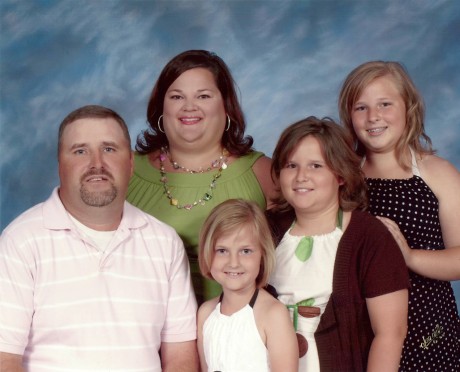 Scottie Rector, 18 years after suffering severe burns, in a recent portrait with his wife Ashley and daughters (from left) Lydia, Laura and Lindsey. “Scottie never gives up,” Ashley says. “And he’s instilled that in our girls.”

The asphalt paver rolled through the work zone and Scottie Rector walked alongside it, working to set the thickness of a new roadway, the heat radiating upwards under the South Carolina sun.

Nearby, a dump truck struck a power line, and high-voltage electricity was suddenly turned loose. The electricity streaked through the truck, killing one man, and traveled to Scottie and the paver. The powerful current entered his body at the back of his head, searing his internal systems and damaging organs before it exited through his hip. It was August 30, 1993.

In critical condition, 20-year-old Scottie was transported from Gaffney, S.C., to Charlotte, and then to the Burn Center in Chapel Hill. His mom and dad stayed by his side, and his girlfriend Ashley called every night. Ashley, who was 16 years old at the time, made the trip to Chapel Hill almost every week, catching a ride with whoever was heading north.

“I remember going in that first night, and Scottie was hooked up, bandaged, on monitors,” Ashley said. “They told us in Charlotte he was not going to make it and to prepare ourselves.” When she arrived in Chapel Hill the prognosis was more optimistic, but Scottie was not out of the woods.

“Nearly every organ system is affected by electrical injury,” he said. “And all need close attention for a sustained period of time. Patients can remain in the intensive care unit for months, and many require dozens of surgeries.”

Even after all that intense care, Cairns added, patients frequently require years of rehabilitation, and many suffer from chronic neurological, psychological and wound-related problems.

After 12 surgeries, Scottie had scars and was missing his pinky finger and part of his ear. He had to learn to walk again and began a rigorous therapy regimen. One of his more difficult exercises required him to move a rod up a board, notch by notch, stretching his wounded skin and flexing his atrophied muscles.

“It made me so mad. I could see him shaking,” said Ashley, who wondered why the staff was pushing him so hard. Scottie persevered, learned to stand, and eventually he was walking laps around the center.

With the help of a cane and three months of recovery and therapy, Scottie left the Burn Center just in time to celebrate Thanksgiving with his family. “After I got home,” he said. “I understood why they pushed you and put you through that. They helped me get back to a normal life without a handicap.”

The Burn Center offers extensive rehabilitation and aftercare programs to survivors and works to help patients transition from burn victim to burn survivor, returning them to lives of productivity and health.

“The physical recovery from a burn injury is time limited, but the emotional and psychological recovery can be life long,” said Anita Fields, R.N., program manager for burn aftercare. “Part of our mission here at the Burn Center is to continue to provide support to burn survivors for as long as they need it.”

Scottie and Ashley were married in 1995 and live with their three daughters in Cherokee County, S.C. They agree that the Burn Center’s reunion events, like the Celebration of Life, are a vital part of the healing process. Burn survivors and their families travel from far and wide to participate.

Scottie said the caring nurses are what he remembers most about the Burn Center, and Ashley calls the Center and its staff a godsend. “It’s the best care we’ve ever gotten. It’s family now, even after 18 years.”

Scottie still suffers from occasional pain in his hips, but it hasn’t stopped him from playing on his church softball team. In 2010 he completed the 10-kilometer Cooper River Bridge Run in Charleston.

The Rectors celebrated Scottie’s 39th birthday in May with a party, because as Ashley says, another year is always something to be thankful for. “Their daddy is their hero,” said Ashley of their children. “Scottie never gives up, and he’s instilled that in our girls.”

The North Carolina Jaycee Burn Center at UNC Hospitals accepts patients from across North Carolina and neighboring states and has operated at above-capacity for the past several years. In 2011 the center admitted more than 1,300 patients and supported more than 3,500 outpatient clinic visits.

North Carolina’s electric cooperatives have a long-standing partnership with the Burn Center, which is recognized as one of the best comprehensive burn centers in the world. In 1972, the state’s electric co-ops pledged $40,000 to help open the center, and since then the co-ops, their partners and vendors have donated more than $1 million in proceeds from an annual golf tournament.

“Our partnership helps ensure all burn victims will receive world-class treatment and that the Burn Center can continue to make strides in advancing scientific knowledge on burn care and rehabilitation,” said Dale Lambert, CEO of Randolph Electric Membership Corporation and member of the Burn Center’s advisory board.

Funding from the co-ops has supported burn prevention and youth education programs, the renovation of the pediatric play room, a burn survivors reunion event at a UNC basketball game, and most recently, the creation of a new Acute Burn and Wound Unit. The new unit allows staff to cross-train in burn care, provides space for a new wound treatment area, and adds 15 beds to increase the center’s total capacity to 36.

In recent years, the co-ops also have supported the Safe Start program to educate pre-K through first grade students about fire and burn safety. It is a collaboration with the N.C. Head Start program, available in English and Spanish, and parents are required to participate so they learn as well.

The electric co-ops plan to contribute another $500,000 over the next five years.

“The citizens of North Carolina are so fortunate that the electric co-ops helped found and have supported the Burn Center over the past 30 years,” said the center’s director Bruce Cairns. “Co-op support has been essential not only in providing resources but guidance, direction and oversight. As a direct result of co-op participation, the Burn Center serves not only the medical needs of our patients, but the nursing, therapy, psychological, spiritual and family support needs as well.”

Lindsey Listrom, a graduate of UNC-Chapel Hill, is a communication specialist with the North Carolina Association of Electric Cooperatives.