kept climbing to reach his dream 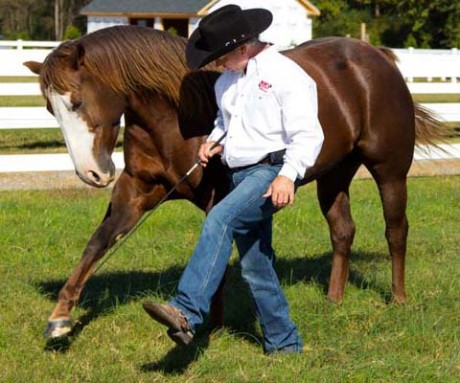 Bill can teach horses to be calm and respectful.

In January 2000, just two weeks before the birth of our first child, my husband, Bill, was laid off from the golf cart business he had been working at for several years. Luckily, the next day a friend offered him a maintenance job at a nearby plant. He was relieved but had no idea where his life was going at that point.

Soon he started getting calls from people asking him to work on their golf carts. So he started repairing golf carts after work at night in one of the stalls of the horse barn behind our house.

Right after our daughter was born, Feb. 15, he made a hard decision: He sold his horse to buy parts and assembled a used golf cart to put up for sale. Within six months, he quit the plant and Bill's Golf Carts was officially up and running in what used to be our horse barn.

Eventually, Bill was able to get another horse and build another horse barn, but he rode only occasionally. I knew how much he loved horses and remembered his earlier dreams of working with horses as a business. As a gift, I arranged for him to go to a natural horsemanship clinic with a well-known trainer in April 2007. He was hooked and knew he had found something he loved to do.

Bill knew how to take horses that no one else could handle and teach them to be calm and respectful. Natural horsemanship isn't something many people in eastern North Carolina have heard of, so this led Bill to working with horses to help others.

Now, my daughter is 12, and we also have a son and a thriving golf cart business. And through his own perseverance and hard work, Bill is blessed to spend time working horse shows and clinics to teach others how to have a willing and safe partnership with their horses. He has performed demos of natural horsemanship, as well as trained and sold a number of horses that otherwise may have been tossed to the side.

Bill has branched out into performing for numerous charity events, to help raise money for autism and for therapeutic riding events. He has traveled to do shows for many church groups all around North Carolina.

We don't always know where life is taking us, but with the right tools, hard work and determination anything is possible.

Lisa and Bill Minchew and their family live in Goldsboro and are members of Tri-County EMC electric cooperative.