On memorable fishing trips in late September and early October, my Daddy and I had our own special place. 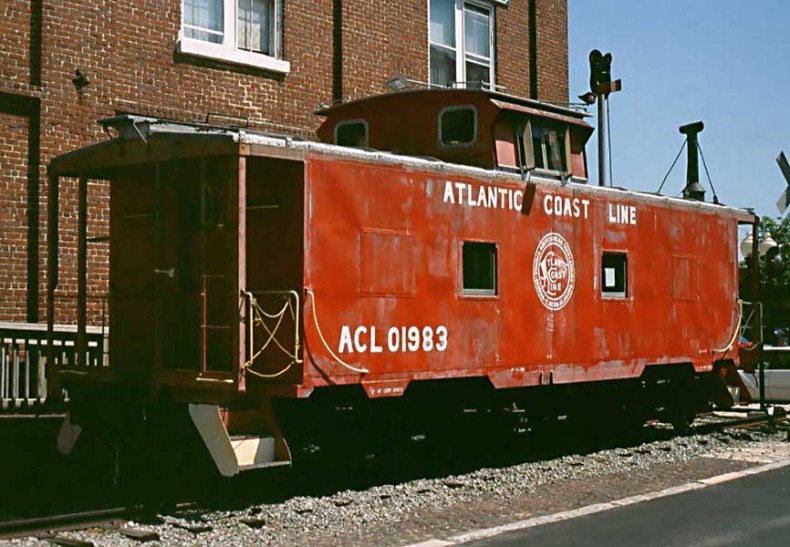 The caboose was red with small windows in a “box” on top. There were no screens. Access was by metal steps up to a small stoop or porch on the back of the caboose. Inside, there was one bunk where trainmen could rest during long trips, an iron potbellied stove on legs for cooking and heat, a “sink” and a “potty.”

I grew up in Wilmington, N.C., in a railroad family. My grandfather, William Gray “Captain Buck” Evans, was an engineer for the Atlantic Coast Line. My father, William Blackwell “Captain Bill” Evans, was a conductor who had over 50 years of service with the railroad. My brother, William Gray “Snookie” Evans II, was a timber and tie lumber purchasing agent, and his wife, Maxine Pittman Martin, was a secretary. The three men were featured in the Atlantic Coast Line publication for serving the railroad for over 100 years combined. 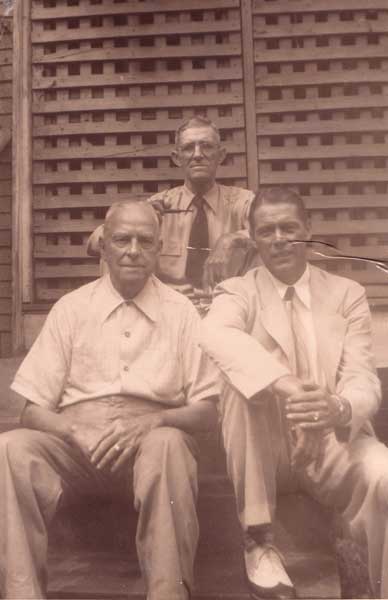 We lived at 219 Nun St., on the corner of Third and Nun, in an historic house, the old “Green Family Mansion.” We were only blocks from the trolley line that ran through overarching trees covered with Spanish moss, over a long wooden trestle across the sound to Station One at Wrightsville Beach. The trestle would sway as the trolley car passed over — really scary at night. There at the beach were the Lumina Dance Hall and Beach Club, the Carolina Yacht Club, and Johnny Mercer’s pier.

Daddy was tall and slim with curly black hair. He had a slightly stern but kind expression. He loved to read, to collect and swap guns, and to work on trains. He would always bring home gifts, large or small, from town or from train trips. He would often take me with him on short train trips. I got to ride in the engine with my grandfather and pull the whistle for crossings and mailstops. A few clinkers (bits of coal from the fire box) never bothered me. My “job” was in the baggage car. While being held at the waist as I leaned out the window, I would hang mail bags on posts as the train slowed. Once when we were carrying a shipment of gold with an armed guard, I was allowed only to peak into the baggage car that day. 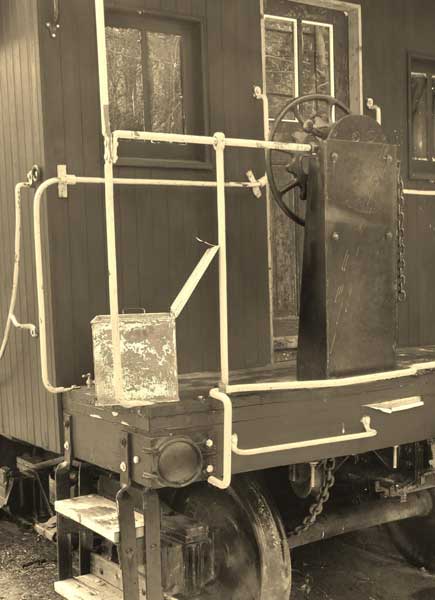 This was the ice chest we used on those caboose fishing trips. It’s now used for birdseed storage, but we placed it on the caboose for its picture.

I am now 86, and I remember several wonderful fishing trips with Daddy to Myrtle Beach, S.C. He would have the train park a caboose on an unused siding near an old gray wooden hotel. The hotel was the only building in the area at the time. From the caboose it was a short walk through sand dunes and sea oats to virgin beach and the sparkling ocean. There were no houses on the oceanfront, and in late September and October there were no people on the beach.

In Wilmington we would pack up my father’s Model-T with supplies and then drive down to that caboose, where we would live during those trips. We took a large metal box that hinged on top and had a spigot for ice melt water on the bottom. This held a 20-pound block of ice, a pat of butter, a glass quart of milk, a slab of bacon, a dozen eggs, and a large hunk of yellow cheese. Other supplies included crackers, a long loaf of bread, fruit, a bag of pecans, two metal bottle carriers each holding six glass bottles of Coke, toilet paper, a cake of Octagon soap, two towels and washcloths, two plates and cups, knives and forks, a butcher knife, cutting board, and a metal box of matches. Driftwood provided fuel for the stove. Clothes and utensils dried in the sun after being 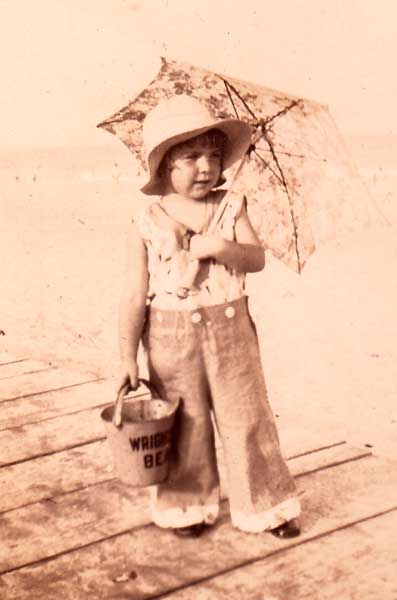 With my parasol at Wrightsville Beach.

scrubbed with ocean water and sand. In addition we packed several books for me, extra clothes, bathing suits, toiletries, a folding cot, three army blankets, an iron skillet, a huge bag of salt, a wooden barrel and lid, a pistol, a hunting knife, and Daddy’s lantern and fishing equipment. Daddy used his railroad lantern so we could read at night, and he smoked a pipe with honey roasted tobacco to keep the “skeeters” and “no see’ems” away.

One of the army blankets was to cover the ice chest as additional insulation; another was for my father, and the third was for me to roll up in on the beach when I was tired and my father was fishing by lantern light. In the caboose I slept on the cot with my brother’s old Indian blanket. (Daddy was concerned that I might fall out of the bunk bed.)

On each trip we fished and picnicked for several days and nights until our ice and food ran out. I would enjoy the surf and collecting the sea shells that were everywhere. There were sand dollars, conchs, scotch bonnets, angel wings, and olive shells. The stars were spectacular, and the sunsets were beautiful.

One morning, while it was still dark, Daddy shook me and said, “Lis

See an Atlantic Coast Line Caboose
The Wilmington Railroad Museum in 2014 marked 35 years of preserving and explaining the railroad history of Wilmington, with emphasis on the Atlantic Coast Line. In the first half of the 20th century, the ACL was based in Wilmington, including its magnificent headquarters, passenger terminal on Front Street (demolished in 1970), roundhouse maintenance building, wharves and warehouses. The museum is located in the old ACL freight office at 505 Nutt St., generally open 10 a.m. to
4 p.m. (1 to 4 p.m. Sundays until Oct. 19). For more information: (910) 763-2634 or wilmingtonrailroad
museum.org

ten, Sis!” We could hear the sea gulls screeching. Daddy said, “Get up and dress. The blues are running!” We grabbed a slice of bread and cheese and a Coke and hurried to the beach. We fished until neither of us could cast again. The blues were so thick in a feeding frenzy that the waves were silver with them and with the smaller fish trying frantically to escape. I was using a small pole and a Hopkins lure, and I caught a fish with every cast. It was quite a fight to land them, so I tired fairly soon. Daddy fished and fished

and had an enormous catch that he would clean and salt before dark. The large bag of salt and barrel were used to pack our catch, and my father would ship it by rail to my grandparents, Gertrude Baker Dunn and John Edward Dunn, in St. Albans, W. Va.

Afterwards we packed our gear, shells and the barrel of fresh salted fish into the Model-T and headed for home. On the way, I thought of how good it was on our “caboose fishing” trip. But I knew most of all how great it was being with my father and having his undivided attention.

Elizabeth Richards lives in Lynchburg, Va. The Richards family has a house on Harkers Island where they are members of Carteret-Craven Electric Cooperative.