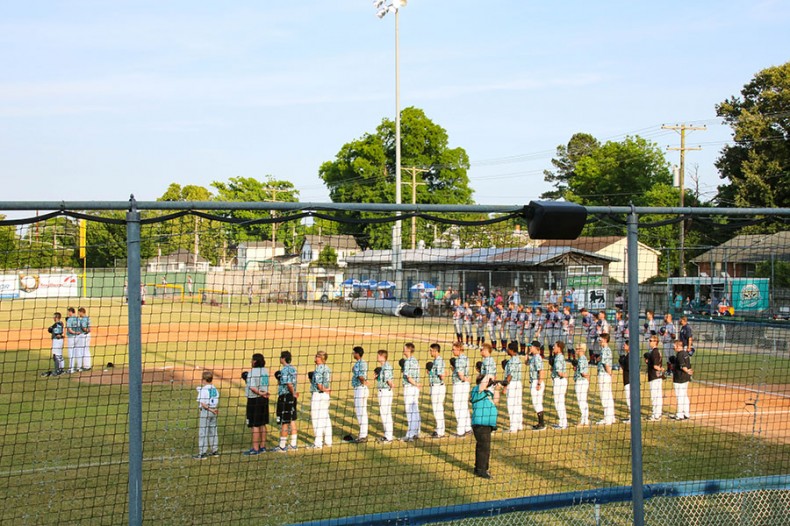 The crack of the bat echoes through the warm June evening as a crowd of several hundred people gathers to cheer the home team, the Edenton Steamers, at historic Hicks Field. Some of the spectators are baseball enthusiasts, others like the social aspects of the evening. 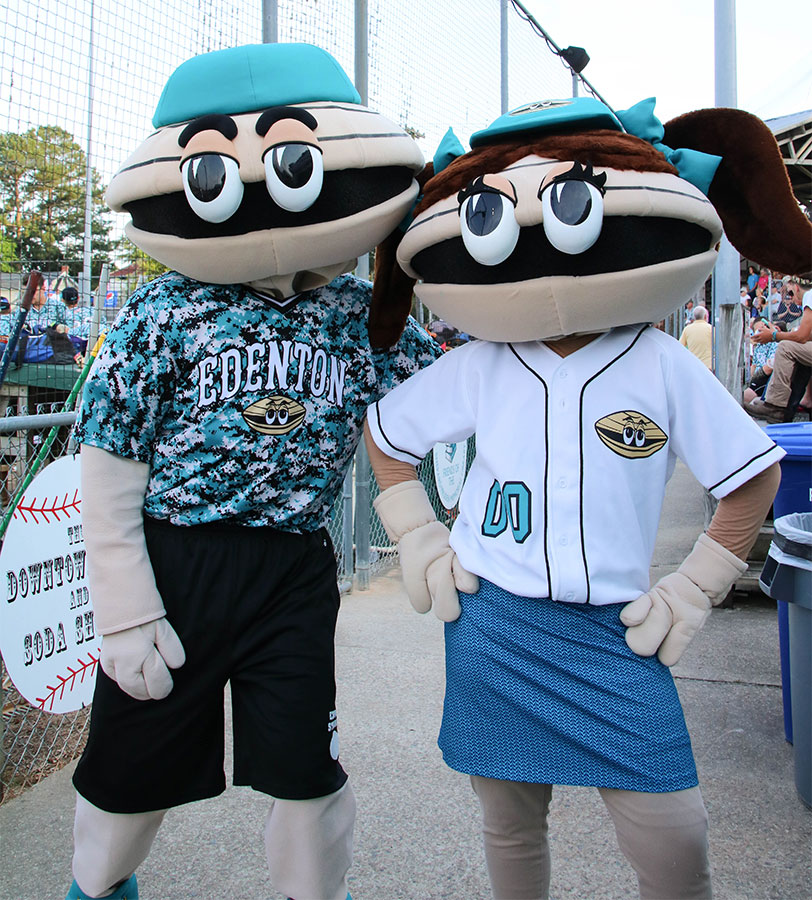 With an inexpensive ticket price (no more than $5 for adults and less for students) the whole family can enjoy an evening out without busting the bank. It’s a chance to have a $2 hotdog or a refreshing Sno-cone, visit with friends and neighbors, and watch people in the fun-loving crowd, like a 9-year-old boy who marches as a one-man band, honking on a trombone while a string of younger children dance and twirl behind him. It’s small-town America at its best.

As part of the collegiate Coastal Plain League, the home team consists of college players from around the country who are spending the summer honing their line drives, their fast balls or their field positions while getting a taste of what it’s like to play professional sports.

The entire community of Edenton welcomes the players, coaches and interns where they become celebrities of sorts. As many as 40 host families provide summer lodging in their homes.

“Host families are the backbone of the Steamers’ organization,” says Vickie Barrow, who serves on the Steamers’ board of directors and has chaired the host family committee in the past. Her family also has served as a host family.

“I think host families enjoy being an integral part of something so important in our community,” Vickie says. “The whole community takes pride in the team.”

“My favorite thing in all of it, and always has been, is a grandparent with a grandchild watching a baseball game,” he says. “And having these boys in our community is nice, too. It teaches them the world is not just big cities or big campuses. It’s nice to have them, and we try to make sure they have fun, which is what they need to do in the summertime.”

The Steamers’ 2019 schedule runs May through August, with details at edentonsteamers.com. If you can’t make it out to see the Steamers play, try to catch a game in a local collegiate league near you:

For Edenton, in particular, baseball has a rich history — the town was home to minor league baseball and semipro teams, including the Edenton Colonials, up until 1952. Its baseball stadium, which sits at the edge of the school grounds of John A. Holmes High School, lends to the storied lore. The stadium was built as a Works Project Administration (WPA) project back in 1939 when Franklin D. Roosevelt was president. The all-wood grandstand is the oldest remaining wooden grandstand of its type in North Carolina, and it is on National Register of Historic Places. The grandstand holds about 500 people, and bleachers have been added on either side of the historic structure to help accommodate larger crowds.

While the historic field may conjure up bygone days, every aspect of how the Edenton Steamers organization is run gives a nod to the future, specifically as a training ground for not only the athletes but for the general manager, the game broadcaster, the office and concessions staff, the marketing team, and the umpires. It’s a group of young people who are hoping to move up the ranks into professional baseball.

Tyler Russell graduated from NC State in 2014; the 2019 season will be his fifth as general manager. He started as an intern during his college years as a sports management major. He oversees all aspects of the ballpark and works with Coach Russ Burroughs to recruit players. 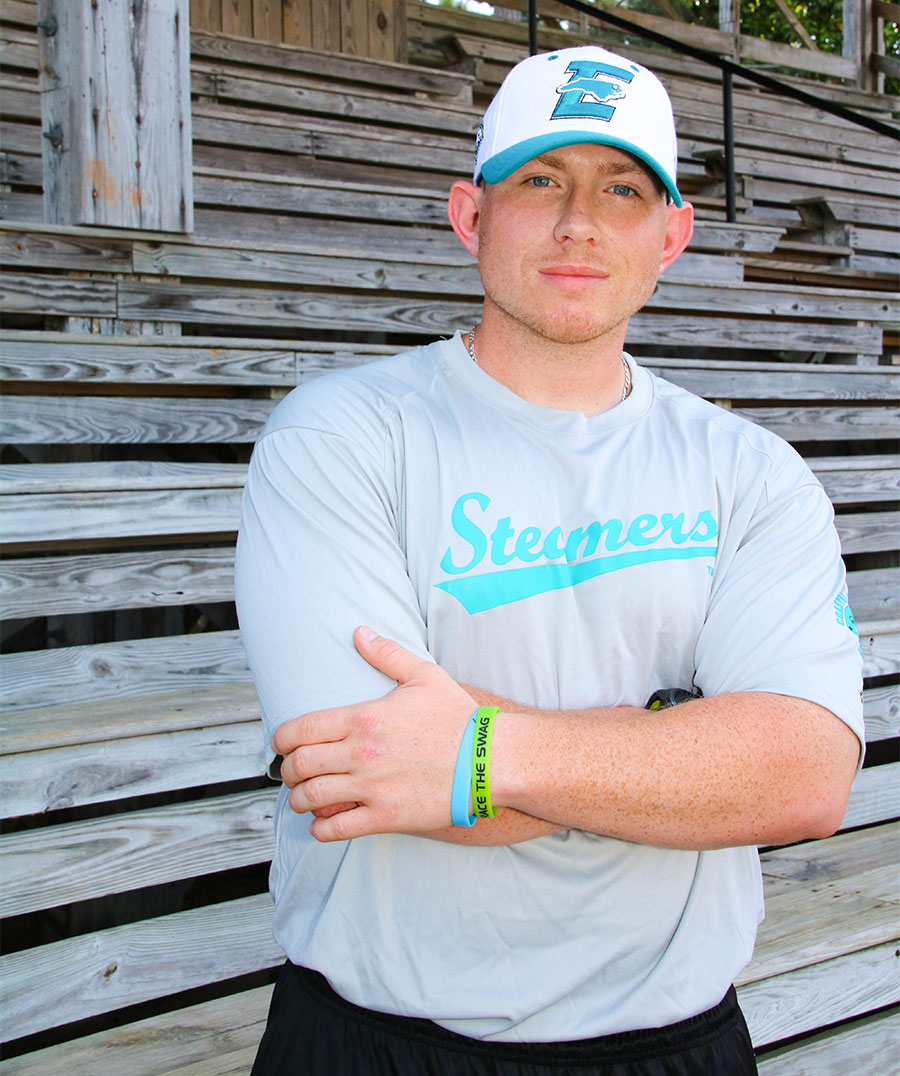 Because players don’t get paid, being part of the Coastal Plain League does not affect the players’ amateur status and most will return to their college teams in late summer. In addition to honing skills, the league gives the players exposure to professional scouts. 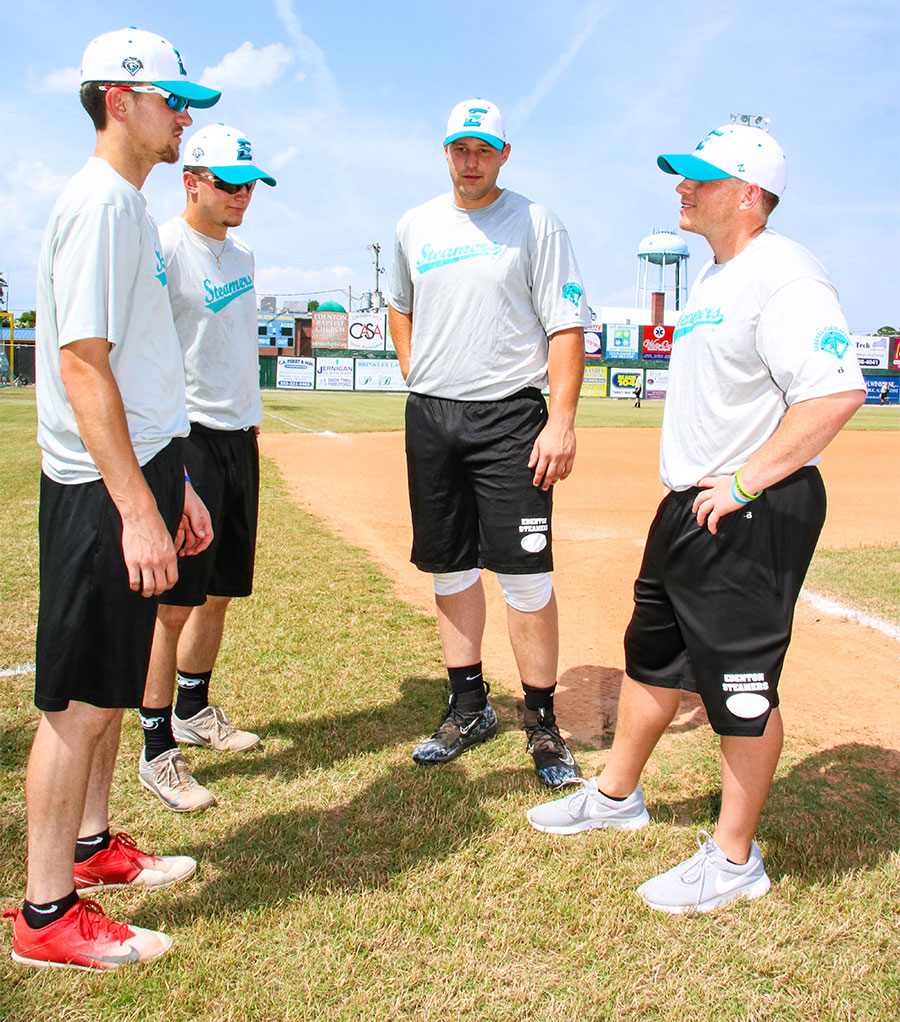 Players huddle during a practice

Tyler and coach Russ Burroughs work together to recruit players to the team. While there is no travel budget for recruiting trips, the two look at stats or talk with coaches. They may contact as many as 100 schools. Last year, 25 schools were represented on the team.

Names and faces change from year to year. Tyler shares that some of the more notable players from past summers include Greg Holland, who played for the Kansas City Royals and was in the World Series two years in a row, winning one year. He now plays for the St. Louis Cardinals. Others are Joe Smith, who is now with the Houston Astros, and Joey Wendle, who plays for Tampa Bay.

“[Joey] is probably the biggest fan favorite the Steamers have ever had,” Tyler says, perhaps in part because he married someone locally and spends time in the area. 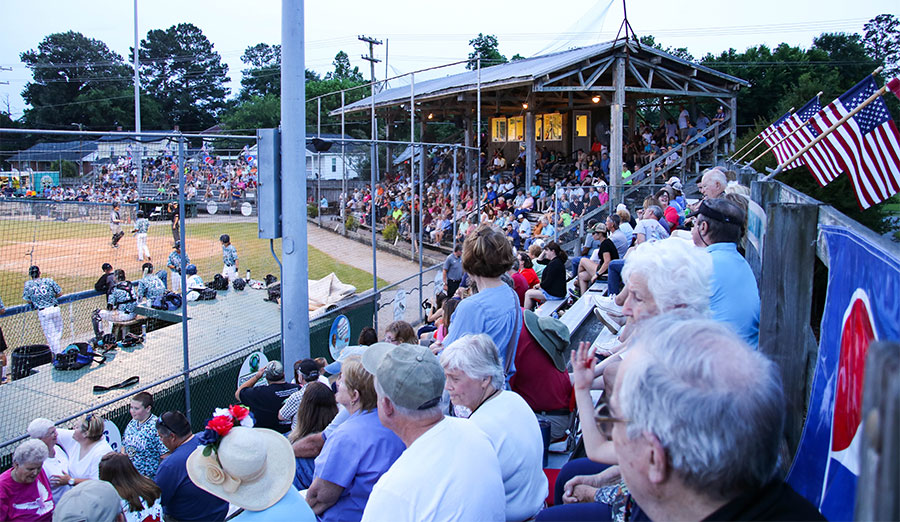 Last year was the first year for head coach Russ Burroughs, from Nashville, Tennessee; the year before he served as pitching coach for the Steamers.

“I really love the town. I like how everybody knows everybody. This is really the only entertainment in this town, so everyone really gets behind these guys,” Russ says. “I like the pro aspect, and that’s kinda how we’re running this team. Everybody’s dream is to play pro ball, so we’re going to treat it as a professional organization, to get them ready for that.”

One of the major features of the Coastal Plain League is the use of wooden bats, another aspect that prepares players for Major League Baseball (which uses only wooden bats).

“When you switch from college to summer ball, you switch from metal bats to wooden bats,” Russ says. “Anybody can hit with an aluminum bat. It takes a special hitter to hit with wood. We play 52 games in 70 days. It’s basically simulated minor league baseball. It tells the scouts and the professional organizations whether a guy can handle the ins and out of everyday baseball — the grind.” 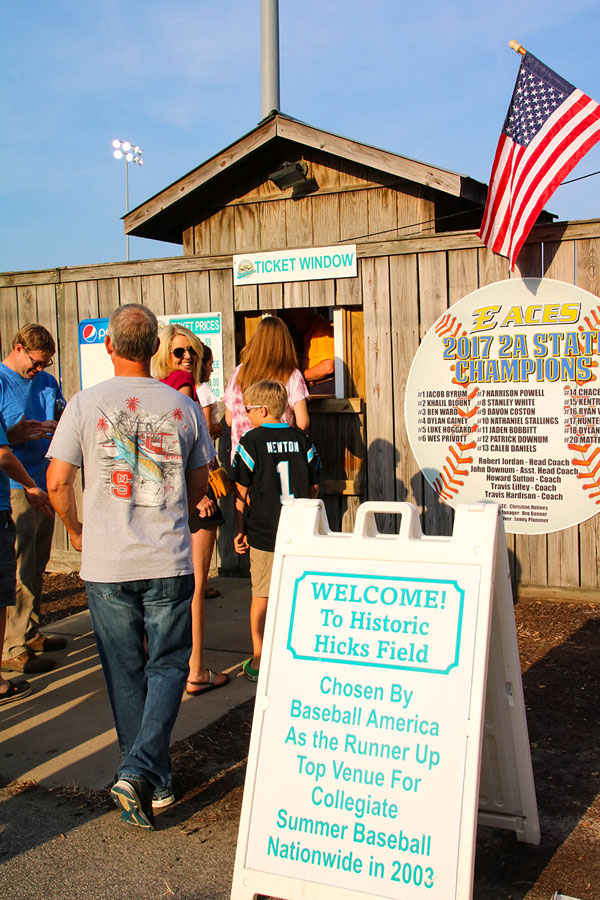 P.J. Potter, from Lodi, New Jersey, graduated from Hofstra University in 2018 and spent last summer as a broadcaster for the Steamers.

“This is a good stepping stone — I’m really excited. I hope to get into affiliated minor league baseball and move up through the ranks,” he said at the time. While P.J. had other options, a conversation with Tyler and some research about Edenton cemented his decision. “This seemed like the best fit. The town is beautiful. It’s small but right on the water, everybody knows each other. It’s very friendly.”

His pick paid off, and at the end of the 2018 season, P.J. was recognized as the 2018 Coastal Plain League Broadcaster of the Year.

Both general manager Russell and coach Burroughs are back for the 2019 season, working with a new slate of players, office and concessions personnel — and a new broadcaster. P.J. left a slot to fill. He recently settled back up north with the media department of a ball club familiar to most: the New York Yankees.