Journey To Save A Life - Carolina Country
More Power
February 2022

Journey To Save A Life

A casual conversation between co-workers led to a lifesaving surgery 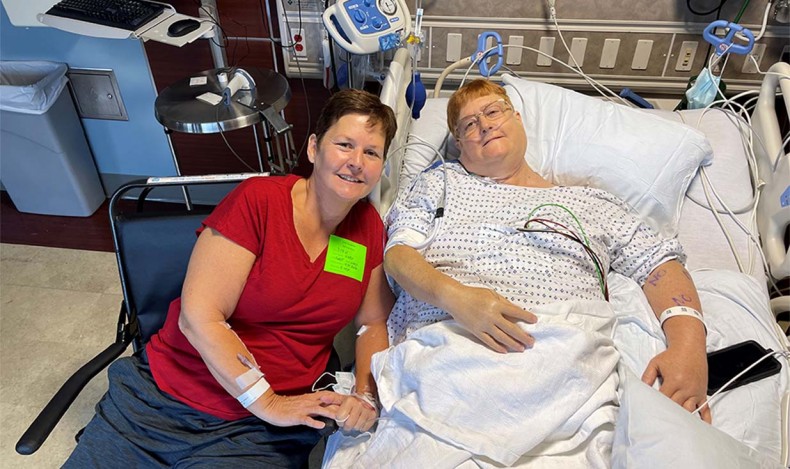 On July 13, 2021, I had the honor to be a living kidney donor for Susan Green. Susan is the wife of a South River EMC co-worker, Dana Green. One day, Dana mentioned that his wife has a rare genetic kidney disease called Focal Segmental Glomerulosclerosis, and that she would soon need dialysis and a transplant. This kind of conversation often leaves you feeling helpless, but I knew instantly that I could help. The exchange stayed in my mind and on my heart. A few days later, I asked about Susan’s blood type: A-positive, same as mine.

I couldn’t stop thinking about Susan. I did some research and found that nearly 750,000 Americans are battling end-stage renal disease, according to Kidney.org, and that more than 100,000 people in the United States are waiting for a kidney transplant. Tragically, 12 people die daily waiting for a life-saving kidney. The good news is that about 22,300 get a kidney and a new lease on life. There are approximately 6,500 transplants from living donors annually, although the majority of transplanted kidneys are from deceased donors. Organs from living donors provide a greater life span for the recipient: A kidney from a living donor lasts 12 to 20 years, while a kidney transplanted from a deceased donor lasts eight to 12 years.

Nearly 750,000 Americans are battling end-stage renal disease and more than 100,000 people in the United States are waiting for a kidney transplant.

These startling statistics helped me to become more focused and inspired to help. I spoke to a friend who had donated a kidney, as well as one who had received a lifesaving kidney. Both served to motivate me and were instrumental in my decision. I have been blessed with good health, and I knew that it was time to help someone else. I believe I was placed in the right place at the right time.

Once I told Dana that I wanted to be considered as a donor, she called the UNC Hospitals Jason Ray Transplant Clinic to get the ball rolling immediately.

“When Dana told me someone wanted to give me a kidney, I was so grateful, and I felt like my feet would never touch the ground,” Susan said. The first step was a blood sample to ensure our blood type and subtypes match. We matched.

I spent two days at UNC Hospitals undergoing a series of scans and tests to ensure my kidneys were healthy and functioning properly, and to confirm that I was healthy enough to undergo surgery.

I stayed in touch with Susan every step of the way.

Once all results were returned, we learned everything looked good — except I had to lose some weight before being cleared for surgery. I started walking and dieting. It is amazing how dedicated you become when someone else’s life depends on your success. In the meantime, Susan began dialysis, a step she was hoping to avoid, but ultimately made her healthier for the surgery.

The weight and I had parted ways, and it was time for the surgery. We checked into the hospital early one morning, and by midday both of our lives were changed and we are forever bound to one another.

I spent two days in the hospital and returned to work two weeks later. The doctors, nurses, and staff at the Jason Ray Transplant Clinic are passionate about the care they provide, so much that I trusted them with my life. My life can go on without much difference, but Susan’s life is changed forever. It is at this point where Susan’s story begins.

“I have been given a second chance for life,” Susan said. “I would encourage those on the transplant list to stay strong, and don’t give up! Spread the word that you need a kidney because there are amazing people who might want to donate.”