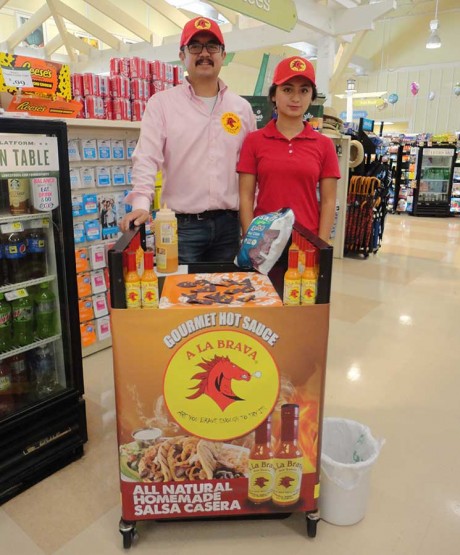 Medina and his daughter, Michelle, working a demonstration stand at a Lowes Foods store

Over the years, Greensboro has established itself as a food city, with downtown eateries offering $5 chicken biscuits and $10 stone ground grit bowls regularly being featured in glossy food magazines. But Gate City Boulevard, which those familiar with the area will know as High Point Road, is one of Greensboro’s most overlooked food destinations. Here you can find gems like Vietnamese banh mi sandwiches and a Caribbean spot offering Puerto Rico’s unofficial national dish, mofongo, which is fried green plantains mashed with garlic and pork cracklings.

Gate City Boulevard is also the home of Villa Del Mar Mexican Grill & Taqueria. Since 2008, Marcos Medina’s family has quietly been serving some of Greensboro’s most authentic Mexican food out of a nondescript strip mall, along with their A La Brava hot sauce, which is quickly gaining steam across the state.

Medina says Villa Del Mar is known for its “antojitos Mexicanos,” loosely translated as Mexican snacks. You won’t find Americanized Mexican food here, but rather authentic and hyper-regional dishes like the state of Jalisco’s birria de chivo, a spicy goat stew, and tortas ahogadas, or “drowned sandwiches,” popular in the city of Guadalajara. There are also tacos galore, but not the crunchy-shelled kind filled with ground beef and cheddar. Here, you’ll find authentic Mexican tacos with your choice of meat, garnished with the traditional raw onion, cilantro, squeeze of lime, and slathering of fresh salsa—ideally the Salsa A La Brava that’s at every table. 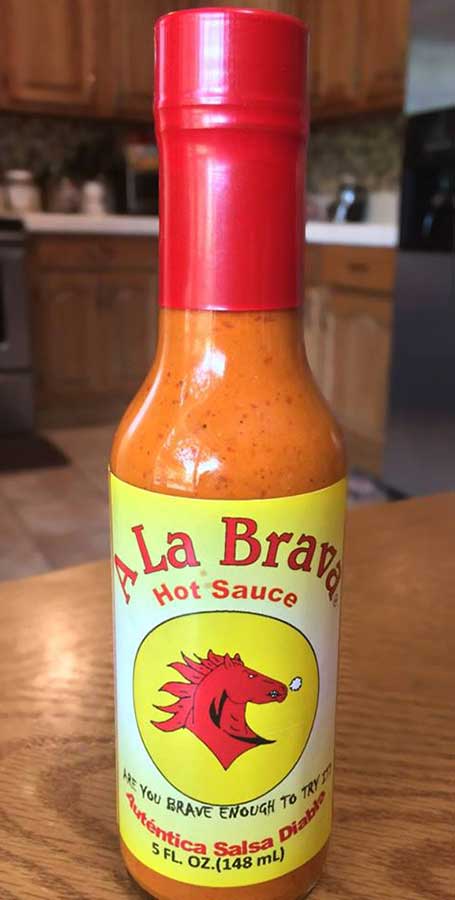 The Medina family’s Salsa A La Brava is something special. Made and bottled in their Winston-Salem home since 2015, it’s unlike most Mexican hot sauces. Though it is spicy, it’s also creamy, which Medina says comes from the use of oil that emulsifies the sauce. Not too vinegary, but tangy, the sauce walks a delicate balance, but its primary difference is how savory it is. The addition of garlic, red wine, and chipotles, which are smoked jalapenos, gives the sauce its distinct flavor, and makes it good on just about anything, from chicken wings to tacos.

The sauce is now sold in 300 stores across North Carolina, including Lowes Foods, where Medina regularly does demonstrations to showcase A La Brava. Given that he’s also running the restaurant fulltime, he can’t devote as much time to the hot sauce as he’d like, but in the coming years he sees the sauce being sold nationwide.

The base of the sauce came from the former owner of Villa Del Mar, but Medina began tinkering with it, adding a little cumin, a dash of chipotle, and before long, he knew he had something special.

“People were coming in just to get the hot sauce, or when they were leaving, they would get a to-go cup of it,” Medina said. “So honestly, I always knew it would be successful.”

Before opening their restaurant and launching their hot sauce business, the Medina family had no experience in the restaurant world and no overwhelming passion for food and cooking.

Medina spent his childhood in Chihuahua, Mexico, but came to the United States with his family when he was a young man in the 1990s, settling in Winston-Salem to be near other family members in the Triad. Buying the restaurant was simply a business venture, one that relied on the recipes of Medina’s mother, affectionately known as Mamá Nana. It somehow all worked, and Medina only hopes to see the family’s salsa grow.

“My family is so happy to see how much people love the hot sauce and I do believe it’s good, not just because we make it,” Medina said. “Some salsas are so hot, they burn your face off. Others have no flavor at all. We bring some heat and we bring the flavor. It’s a beautiful balance.”

A bottle of A La Brava

Try your own bottle of Medina’s sauce — visit goalabrava.com for a list of stores and restaurants serving it.