‘Sticker Car’ is a Roving Memorial

Laureen Wilkins honors her brother with a car you can't miss 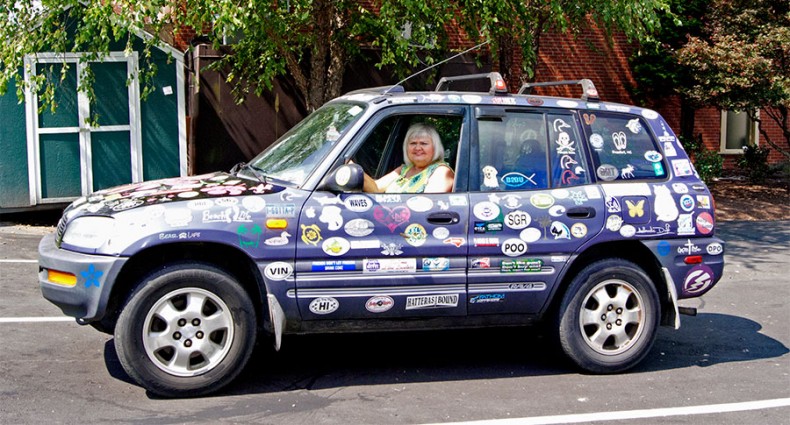 You may have seen Laureen Wilkins’ car. You’ll remember it if you have — it is literally covered with stickers. The purple ’97 Toyota RAV4 belonged to Laureen’s brother, Michael Tucker, who was dying from complications of diabetes. Knowing he would never drive it again, Michael offered the car to his nieces. They didn’t want it, but Laureen did.

Laureen likes her wildlife stickers the best. Her husband works for Ducks Unlimited, and they both love wildlife.

The car had been “totaled” in a wreck while Michael owned it. The back window was broken out, one of the doors and the hood were damaged. But it ran good. Laureen covered the window with plastic and duct tape until the window was replaced, and her brother-in-law salvaged a hood and a door, which were black. Now the purple car had a black door and hood.

Laureen didn’t have the old car repainted — it wasn’t worth it. But that was when she started adding stickers to the car.

“It excited me to be able to stick something on my car,” she laughs. She’d always been cautioned about bumper stickers and such as they would ruin the paint. Well, as she points out, this car’s paint job couldn’t get much worse.

She started buying stickers whenever she and her husband went on trips. When her work required her to travel from her Henderson home, she added more stickers. Then her co-workers began bringing her stickers from their trips. The collection grew.

Now you can’t miss the car. Friends see it in a parking lot and know Laureen is there.

“I can’t hide anywhere,” she says. It is not unusual for her to come out of a store and find a stranger reading the stickers on her car. Sometimes people will yell at her: “I love your car!” when she passes by. Laureen doesn’t mind.

The very first sticker was put on the car by her brother — it is the parking permit sticker from the condo where he’d lived. Her niece, Sarah Robinson, has given her the only ones from out of the country: one from her school trip to Greece and another from a mission trip to Ecuador. People love to give her stickers. One older gentleman gave her a whole bag of them.

“They were generic stickers, peace signs and such. But that was okay. I put them all on my car,” Laureen says.

When asked which ones are her favorites, she thinks hard before saying: “the wildlife.” Her husband works for Ducks Unlimited, and they both love wildlife. One that holds special meaning to Laureen is from Middleboro, Kentucky. “Mama and Daddy were from there. It is getting raggedy.”

A lot of the first stickers are getting raggedy or coming off. Laureen hopes to be able to replace them. She confesses she doesn’t wash her car because she doesn’t want to mess up her stickers. “I just spot clean it.”

The car has become a memorial to Laureen’s brother.

“I’ll keep fixing anything on it to keep it on the road. It’s the memories, the feeling I get when I sit behind the wheel.” There is a dent in the armrest from where her brother’s elbow rested while he drove. She touches that spot as she says: “I feel like he’s kind of with me.”