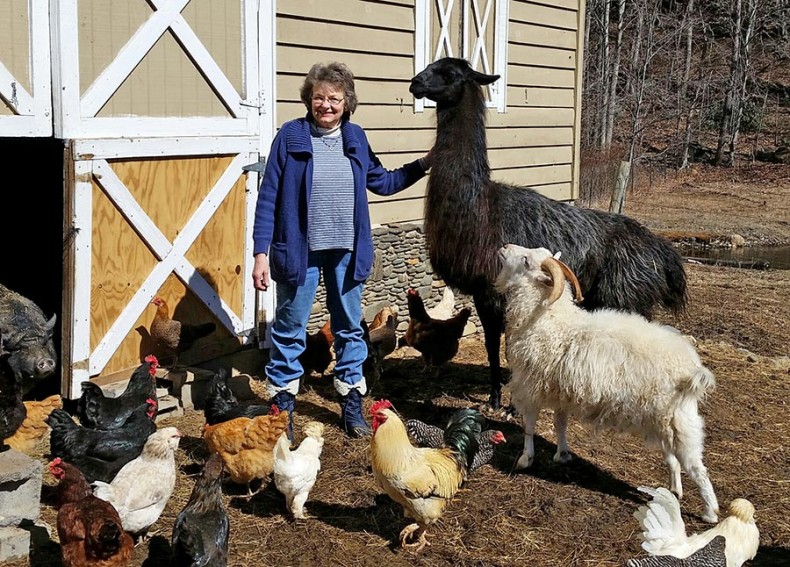 Diane’s medical stints abroad include working with Mother Teresa at her home for the dying in Calcutta and holding backcountry clinics in Afghanistan during the Soviet invasion of the mid-1980s. Before leaving for Afghanistan she was asked to make out her will and be prepared to die. For her safety in Afghanistan, Diane was dressed in a burqa, tied onto a camel, and spirited from makeshift clinic to makeshift clinic under cover of night, sleeping in tea houses and chicken coops along the way.

This busy, dedicated woman sometimes puts writing on a back burner. But adding to the newspaper articles she wrote about her volunteer adventures, she’s currently holed up in one of her tiny cabins working on a rich tapestry of a novel about a woman of her grandmother’s era, called Ida Kate.

Diane’s love of llamas led her on an adventure trip to Peru recently, where she met llamas and alpacas everywhere she turned. At the ancient Inca ruin Sacsayhuaman, she came face to face with a brand-new black baby llama. She was close to tears as she thought of Cuzco, her own little black llama and the day he was born. Hiking the celebrated ruins of Machu Picchu, she encountered dozens of llamas frolicking on the rocks.

Always on the lookout for short-term volunteer health care opportunities, Diane thinks her next stint will be at the soon-to-be-established medical clinic, the East Africa Institute of Health, in the village of Bulumagi, Uganda. It’s the inspiration of Boone residents Tina Groover and Marian Peters, and the village women. In fact, Diane hopes to arrive at the project one step sooner: she’ll go early and help make mud bricks for the clinic’s walls. Leave it to Diane!

Sue Spirit lives in Zionville, Watauga County, and is a member of the Blue Ridge Electric cooperative.