The warmth of a sister’s love 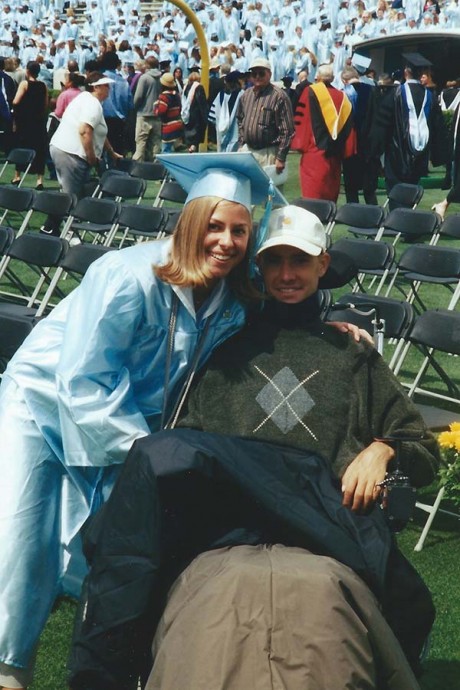 This is Cheryl and me back when she graduated from UNC-Chapel Hill.

There is a line in the song “Hero,” by Bette Midler, that says, “It must’ve been cold standing there in my shadow.”  When I hear those words I think of my sister, Cheryl. Not because I’m her older brother and not because of parental favoritism between us. It is because of what happened to place her there in the shadow.

Growing up, my sister and I had the typical arguments between siblings. When I was a senior in high school and she was a freshman all that changed: I was now her chauffeur to school. I do not really recall any specific conversations during the 20-minute ride each day, but that is when my love for my sister began to grow. There were great times just talking as brother and sister without any influence of friends or parents. From that year onward our relationship grew very close.

In April of her junior year, I was in a car accident and suffered a spinal cord injury which left me paralyzed from the chest down. That is when Cheryl began to stand in my shadow. Not because of her choice, but because of the care I needed. When Cheryl was picking out a dress for the prom, our mom was at the hospital. Instead of coming by our house with her date for prom pictures, Cheryl had pictures made outside the ICU. It was not a problem for her, she just made sure I could be included in her life.

From the ICU, I was transferred to a spinal cord center in Atlanta for the summer of that year, the summer before Cheryl’s senior year in high school. Instead of making the typical preparations leading up to her senior year, she made trips back and forth between our home in North Carolina and Atlanta. Much of the college search and preparation fell to her without a great deal of involvement from our family, because they were busy preparing our home for my return and dealing with hospitals.

Cheryl never showed any frustration; she just continually moved forward. When she graduated as valedictorian, she had been accepted to the nursing program at UNC-Chapel Hill.

This past April was the 18th year since my accident, and my sister and I are still very close. Cheryl is now married and has three wonderful children. I also was married eight years ago, and it is wonderful for our families to experience the love between my sister and me that started during our car rides to school. She may have been cold in the shadow, but she thrived with the strength of God by her side.

Derek Triplett lives in Granite Falls, Caldwell County, and is a member of Blue Ridge Electric.