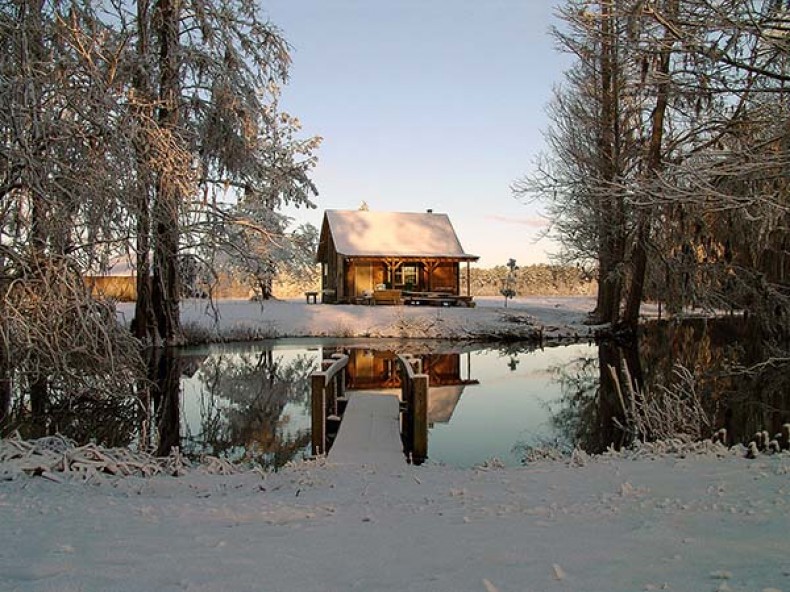 There’s a story behind this picture of a cabin in Pamlico County on a snow-covered morning in 2005. My cousin’s dad purchased the land, known as the Dixon Place. As you can see in the foreground, there is a pond here. This is called the “little pond.” As I stand taking the picture, behind me is the “big pond.” This was our swimming hole in the late 1940s and during high school days in the 1950s. My twin brother, our first cousin and I spent many hours in the pond swimming, diving, fishing, duck hunting. Growing up, we learned to farm here, drove tractors, hunted, rode horses, played “Cowboys and Indians.” Yes, we rode horses and ponies bareback through the woods and down paths made by cows and deer. You can imagine what fun that was.

My cousin and his wife, after retiring, had a dream. They wanted to build a little cabin on this site near the pond where they could enjoy their remaining years together with their family and friends. Here is the kicker: They built this cabin with their bare hands. They cut logs on the property, pulled them up to the site, sawed them into rafters, studs, floor support and flooring. They did the work themselves, even though we offered to help. They would say, “We want this to be our dream cabin, and we will do it all.” And they did.

So many others have enjoyed their cabin as well. Their children and grandchildren slept many cold nights near the woodstove on the first floor and in the loft above. Many activities occur here at Thanksgiving and Christmas. A family reunion was held here.

Larry H. Prescott lives in New Bern, where he is a member of Tideland EMC.