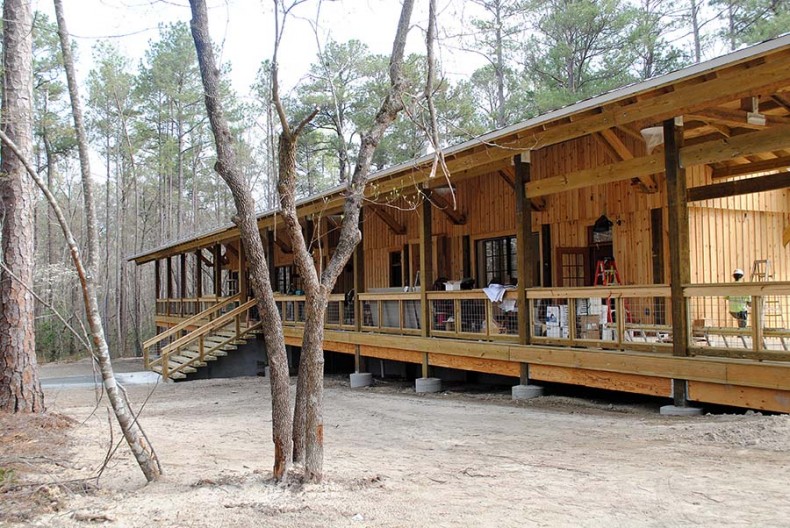 Millstone 4-H camp, a Pee Dee Electric member, is in a setting beyond rustic: In a longleaf pine forest in North Carolina’s Sandhills Game Lands near Ellerbe.

“We’ve got a long history … with a lot of very old buildings,” says director Keith Russell.  WPA workers in the 1930s built the 250-acre camp, which has an 18-acre lake and 14 cabins, since upgraded. The camp is used not only by 4-H campers from across the state, but a number of civic organizations as well. 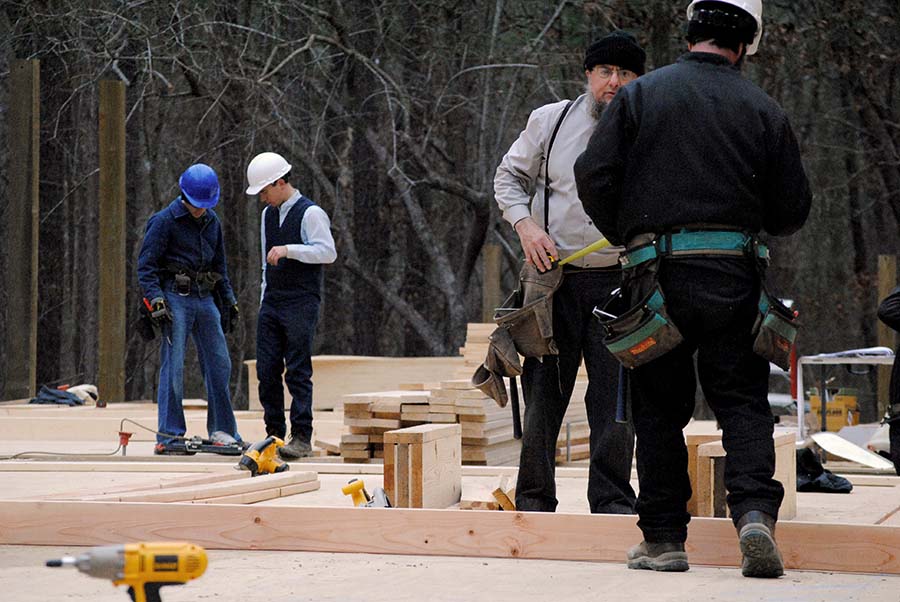 Several years ago, 4-H and N.C. Cooperative Extension Service officials decided to make the camp a year-round destination by adding a heated, air-conditioned auditorium/conference center. They wanted technological amenities like audiovisual capability, but they also wanted to preserve the natural atmosphere and the link to history.

The group raised $1.5 million for the new State Employees’ Credit Union Learning Center, with $750,000 coming from the credit union, $250,000 from the Richmond County-oriented Cole Foundation, and the rest from individuals and businesses. 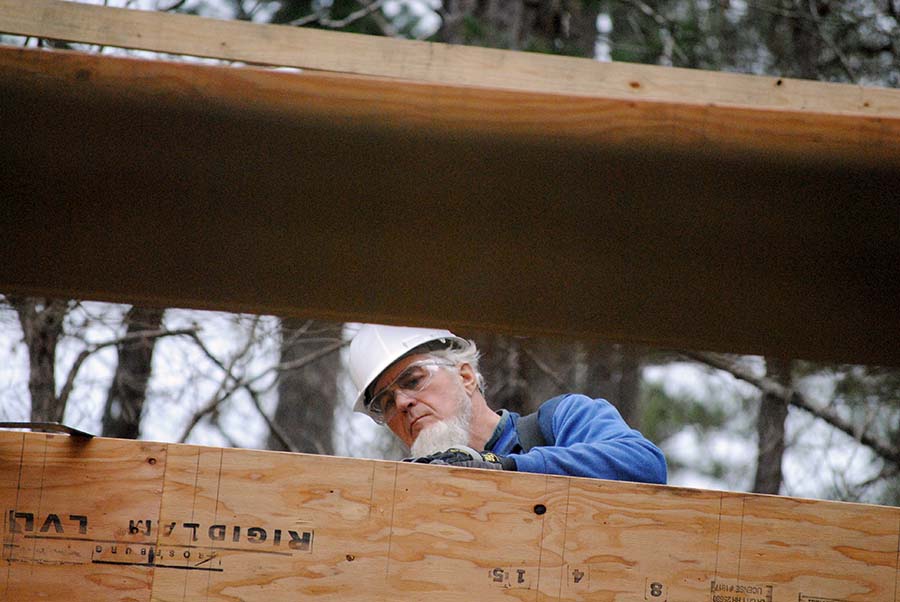 As builders, planners chose a group of craftsmen with their own strong ties to the past: the Union Grove Amish community from the Hamptonville-Union Grove areas of Yadkin and north Iredell counties. 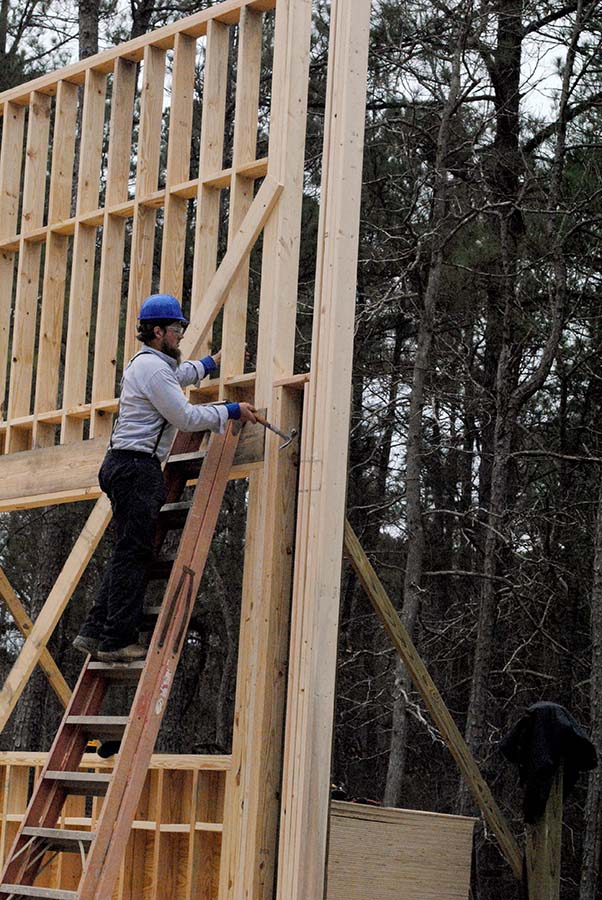 Walls were put together lying on the floor, then raised into place.

Union Grove, with 28 families, is North Carolina’s only Amish community. From helping each other with barn-raisings and other construction, they’ve branched out into occasional projects for others, with the money earned going to their school.

At Millstone, they were joined by members of the Chatham, Va., Amish community, a 12-family sister community that they helped establish.

For much of January and on into February of this year, gray-bearded elders and smooth-cheeked teens swarmed over the Millstone site — measuring, cutting, lifting, hammering and nailing. Ages ranged from 16 to his own 65, said crew member Alvin Mast. “We want to keep our kids with us and teach them a trade.”

All are New Order Amish. Though they use horses and buggies for transportation, they use electricity and gas-powered construction equipment. Many in Union Grove are EnergyUnited members.

Even when nighttime temperatures dipped into the upper teens, the Amish were at work at 7:30 in the morning, working until dark, said camp director Russell. 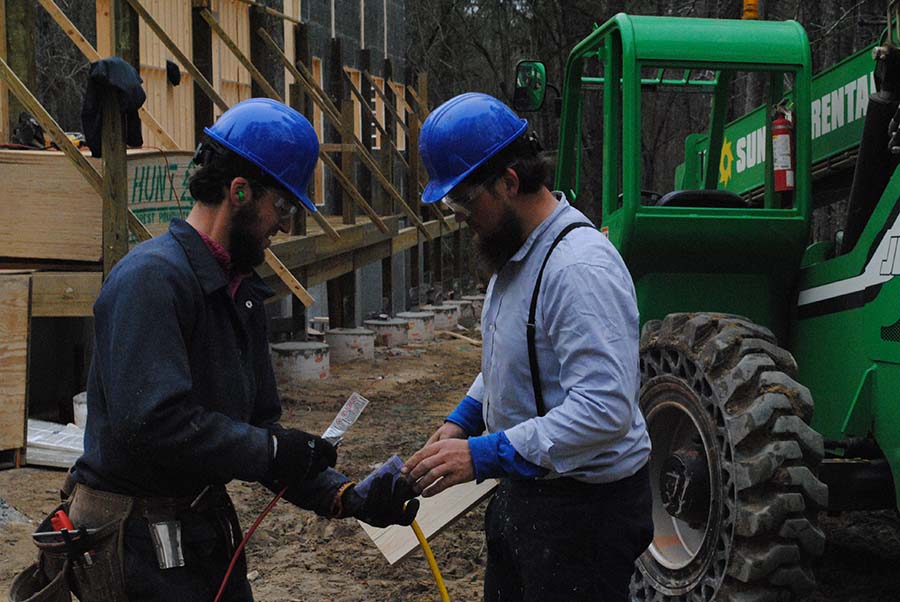 Because of the length of the project, wives and children stayed with them in Millstone’s cabins. Farming and other chores back in Union Grove were being tended by other members of the community, said Mast.

The open-beam construction was new to the crew, said Mast. “We’ve never done anything like this before. It’s a learning curve for us,” he said, but added. “It’s coming. We’ll get there.”

The crew laid out the walls horizontally on the floor, then lifted them high into place, sometimes by hand, sometimes by machine. 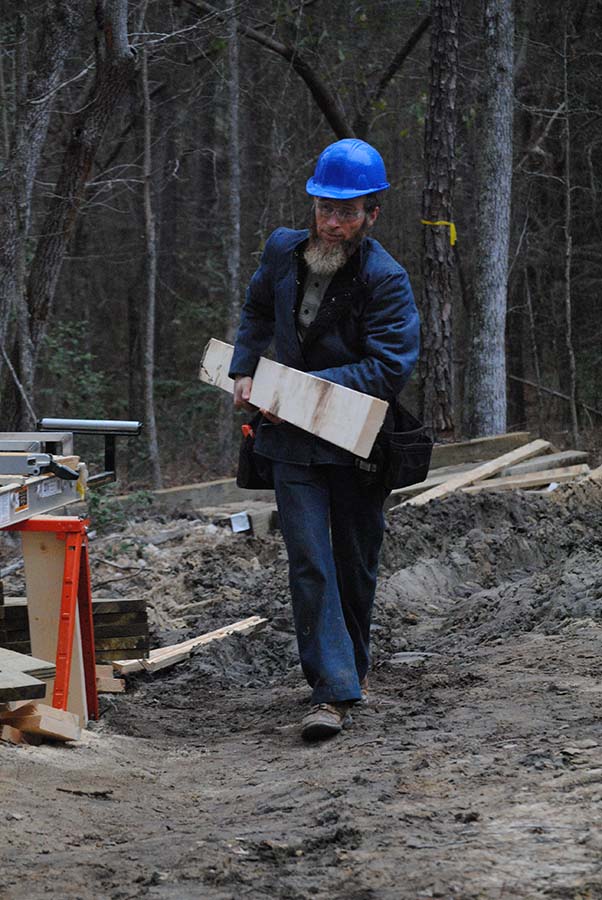 Amish craftsmen, working from 7:30 a.m. until dark, bundled up against January’s chilly temperatures.

Because the Amish don’t drive automobiles or trucks, Pembroke Building Supply delivered 8-by-8 timber to their Hamptonville shop, where massive roof trusses were fashioned. Pembroke then delivered them to Millstone.

“We took out as few trees as possible” for the 3,400-square-foot building, says Russell. “We wanted it to nestle in the woods so that when you’re in the building, you’re looking out through the trees.”

The Cole Foundation Auditorium will seat 170. The other half of the building holds conference rooms and a catering kitchen.

Russell was already taking advance bookings in January, when the center was still just a foundation and an arrangement of vertical planks with holes for windows. Carolina Farm Credit, anticipating a customers’ appreciation dinner, was one early registrant, and other groups were setting up educational meetings.

“It’s going to be a wonderful building,” Russell said. “We wanted to be a regional resource for North Carolina.”