Catch of the Day: Trout Farming in NC

Clear, pure water spills over the Lake Logan Dam high up in the Pisgah National Forest in the western part of the state. It brings a smile to Wes Eason’s face.

“We build everything around our fresh, rainbow trout fillet,” says Wes. “Fresh fillets are typically swimming in the morning, delivered in the afternoon..."

“It’s a lovely sight to see that water coming over the top of that because it means the lake is full, which is good,” Wes says.

That pristine water is headed into 24 concrete raceways at Eason’s Sunburst Trout Farms, where the 6,000-gallon-per-minute water flow creates a desirable environment for the fish, simulating a free-flowing stream and providing plenty of oxygen to keep the fish healthy and happy. That full dam also means the water temperature is cooler, which is best for the fish.

Wes and his brother Ben are the third generation to make a living as trout farmers. The farm, served by Haywood EMC, was started in 1948 by Eason’s grandfather, Dick Jennings, Jr., as Cashiers Valley Trout Farm — the first commercial trout farm in the Southeast. The location and the water continue to contribute to the success of the farm today. 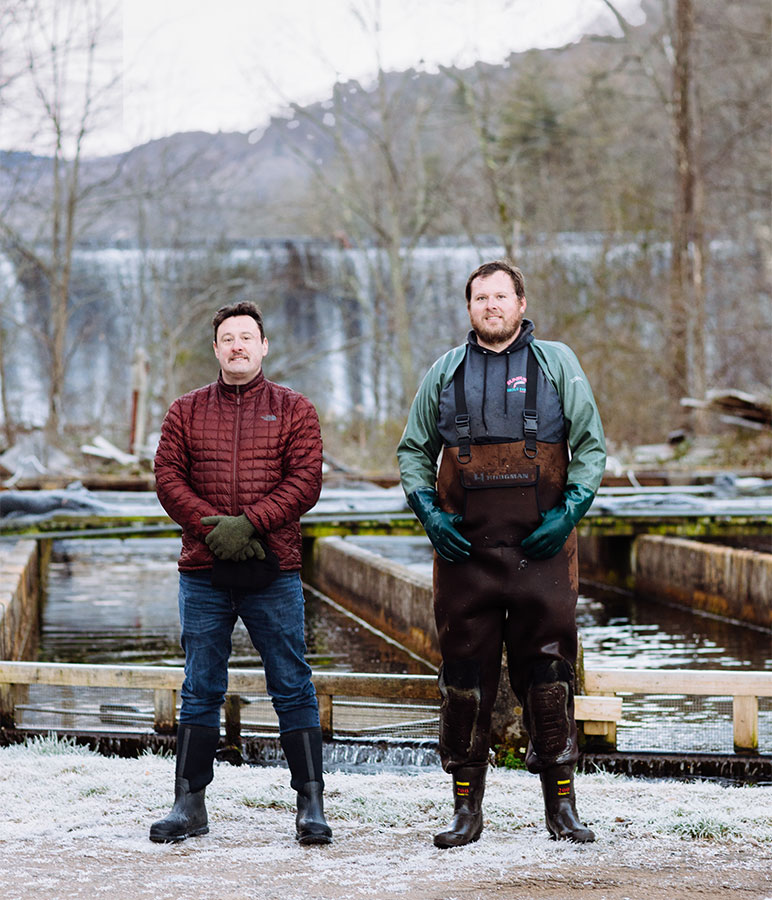 An impressive feature of the operation is what they refer to as a flow-through system. They pull water via a pipe from the bottom third of the lake, which is cooler and contains more oxygen. Thanks to gravity, it flows from the lake into and through 20 raceways at the upper end of their property, under the ground into two different ponds, and then to four lower raceways, through a settling pond, and then back into the river. It’s a continuous flow, which means the fish are swimming in the freshest of water. 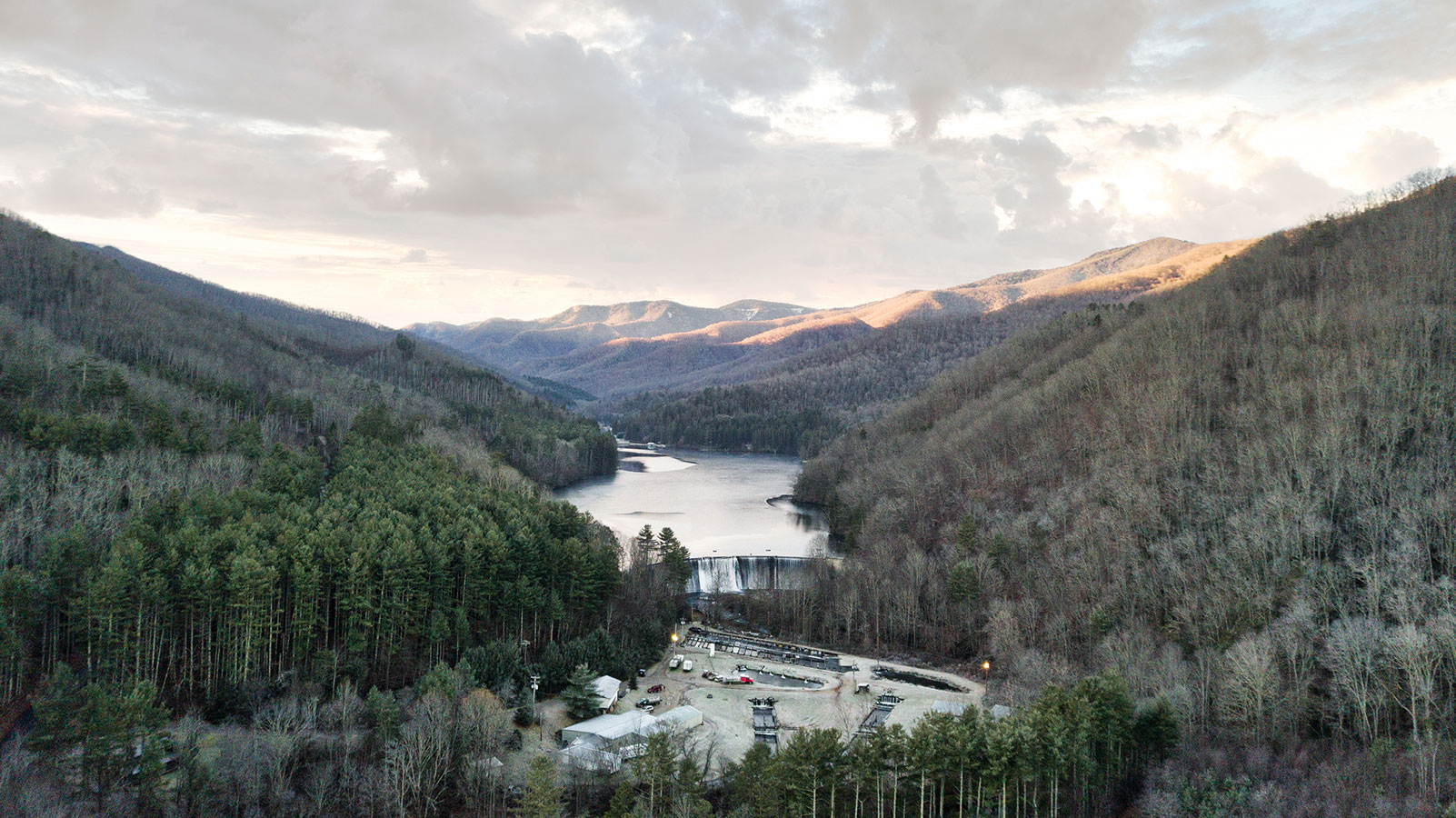 A view of Lake Logan, its dam and the Sunburst Trout Farm operation

It takes about 18–24 months from the time juvenile fish, no more than an ounce, are added to the raceways, to the time they are harvested at about 1.5 to 2 pounds. During their lifetime, all the way up to harvest, the fish are periodically separated and moved from one raceway to another, depending on the size. A screen, adjusted to allow a certain size fish to swim through, holds back larger fish which are then moved to a neighboring raceway, leaving the smaller fish.

This helps prevent the raceways from getting overcrowded as the fish grow, which is a key to maintaining the water quality throughout the process.

A three-person crew harvests fish four days a week. They move the fish with a large dip net to a live haul truck equipped with stainless steel tanks filled with water and supplied with oxygen. They then make the 25-mile trip from the farm to Sunburst Trout’s processing facility in Waynesville. While the fish are in the tanks a short period, Wes says they could live for a few days in the tanks if they had to. Every step in the process is designed to ensure a quality, fresh product. 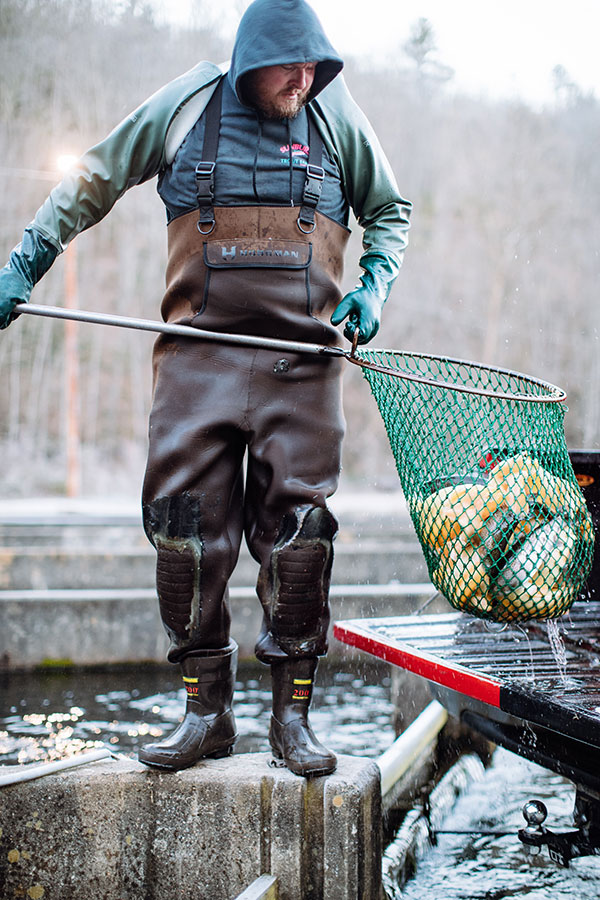 Ben Eason harvesting some golden rainbow trout, among others

“We build everything around our fresh, rainbow trout fillet,” says Wes. “Fresh fillets are typically swimming in the morning, delivered in the afternoon, often no more than four hours out of the water but never more than 24.”

They also have crafted a line of value-added products. Along with smoked trout fillets, smoked trout dip receives accolades.

Other products include caviar, popular with chefs, and trout jerky. A rainbow trout burger is their newest product. The company has 23 employees, ships nationwide and serves a wide range of restaurants.

“When you support Sunburst Trout,” Wes says, “you support a product and a family that took the time to craft something special.” 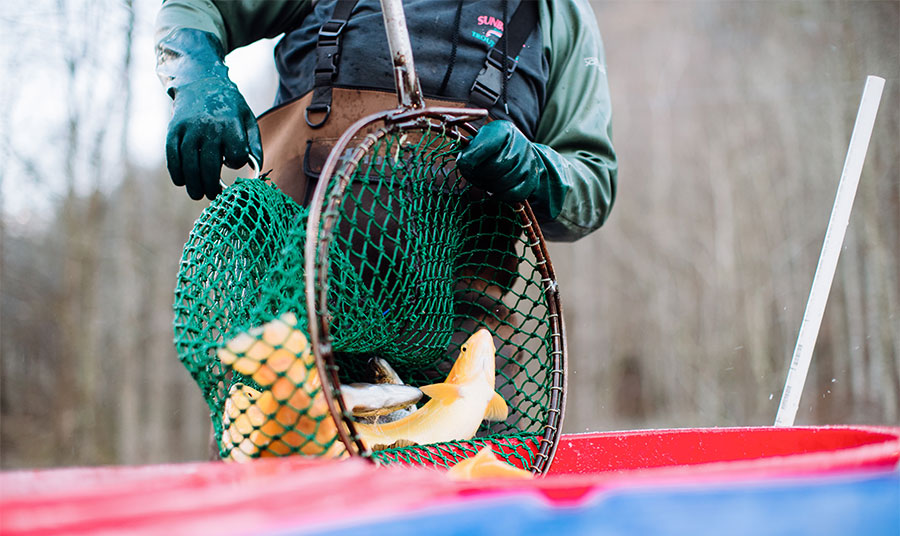 Since Wes Eason’s grandfather started the first rainbow trout farm in the Southeast more than 70 years ago, North Carolina’s ranking has grown to second in the United States in commercial trout production, behind Idaho.

The state produces 4 to 5 million pounds annually on 40 commercial trout farms in the western part of the state, with a direct economic value of about $23.5 million.

Unfortunately, the pandemic and resulting economic downturn will affect numbers this year, according to Skip Thompson, who specializes in aquaculture with NC Cooperative Extension. Lower demand for trout from resturants is one factor affecting the industry.

“We are not sure of the exact impact yet, but it will be significant,” Skip says. “A rough estimate is 40 percent less.”