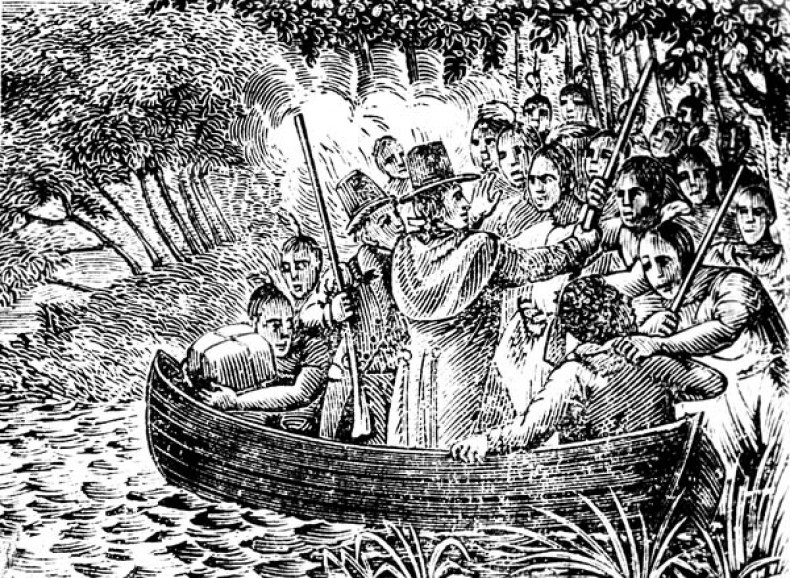 This sketch depicts eastern North Carolina Indians capturing Christoph von Graffenried and John Lawson at the beginning of the Tuscarora War. (Courtesy of the State Archives of North Carolina)

Three hundred years ago this month, white colonists and their Indian allies decimated the last remaining stronghold of Tuscarora natives in the Carolinas. During the first three weeks of March 1713, fierce fighting culminated in a massive fire that destroyed the formidable Tuscarora fort, Neoheroka, near Snow Hill, Greene County, located in what is now a soybean field off Hwy. 58 North. Nearly 600 Tuscarora men, women and children were killed and almost 400 were taken into slavery. The destiny of what had once been the most powerful people of eastern North Carolina changed forever. And white colonial expansion into this region was assured.

After Europeans founded the towns of Bath (1705) and New Bern (1710), the Indians who lived in the Neuse and Pamlico watersheds alternated between trading with them and fighting with them. As they expanded their settlements, white colonists considered skirmishes with Indians a nuisance. The Tuscarora ("hemp gatherers") communities north of the Pamlico remained more or less neutral in order to keep a trading relationship with the colonists, while those in the south who experienced more confrontations grew more or less hostile. By summer 1711, during a yellow fever outbreak, hostilities had reached a peak, and Tuscarora and allies planned an attack. Armed with guns, they killed some 140 colonists on plantations near Bath. That September, New Bern's founder Christoph von Graffenried made his way up the Neuse along with English surveyor John Lawson of Bath, who had explored this area during the previous 10 years and considered himself friendly to the natives. But angry Tuscarora captured the party, killed Lawson and a black servant, and sent Graffenried back to New Bern to recommend against hostilities. Instead, the so-called Tuscarora War began and didn't end until the siege of Neoheroka.

Catechna Indian Village, on the banks of Contentnea Creek at Grifton, is a scaled-down replica of an Indian village located across the street from the Grifton Museum. Open first and third Sundays, 1–5 p.m. or by appointment. (252) 524-0190 or www.griftonmuseum.com

The North Carolina colonials enlisted help from a South Carolina militia commanded by Capt. John Barnwell. These soldiers in winter 1712 began attacking Indians, killing some and taking others for slaves before heading home. Later that year, another South Carolina militia of mostly Indians, headed by Col. James Moore, rampaged Tuscarora villages and captured the chief, Hancock, of the lower tribe, who soon after was executed by the colonial government.

Eventually, Col. Moore's forces reached Neoheroka in early March 1713. The well-constructed fort was defended by battle-tested warriors for three weeks. Graffenried reported that "the savages showed themselves unspeakably brave, so much so that when our soldiers had become masters of the fort and wanted to take out the women and children who were under ground, where they were hidden along with their provisions, the wounded savages who were groaning on the ground still continued to fight."

Though sporadic outbreaks of guerilla violence would occur for another few years in the "lakes, quagmires, and cane swamps," destroying Neoheroka marked the end of any significant Tuscarora resistance to white settlers. Tuscarora sought refuge in the country's interior, and many then migrated north, ultimately joining the Five Nations of Iroquois in New York.

Recently, archeological excavation has occurred at the site of Fort Neoheroka, and in 2009 it was added to the National Register of Historic Places.

Much of today's information on the fort exists because of an early 18th century illustrated map, likely drafted by a Carolina militiaman. According to "Architecture of a Tuscarora Fortress," by Charles Heath and David Phelps, the fort measured 23,400 square feet and contained subterranean bunkers, which did precious little good in the end.

Ray Cavanaugh of Marblehead, Mass. contributed to this article.