TinyHouseNC founder Andrew M. Odom gives a tour of a tiny house in Burgaw built entirely by a group of homeschoolers.

Imagine a home the size of some master bedrooms or smaller. Every inch is maximized with innovative storage solutions, taking advantage of nooks and crannies that may be taken for granted in a typical -sized home. Often a loft area that serves as a bedroom perches above a bathroom, kitchen and small living room that may also serve as an office or some other purpose.

“A smaller house means a larger life” seems to be the philosophy of tiny house owners. Tiny houses, typically anywhere from 100 to 400 square feet, have taken off in terms of popularity and alternative housing options.

“People are drawn to tiny homes because they want happiness in their lives,” says Teal Brown, who with his dad, Gerry Brown, own Wishbone Tiny Homes in Asheville, which specializes in portable, Craftsman-style homes ranging from 150 to 250 square feet.

“Typically, that manifests in the form of financial freedom and additional free time. Many people have become disillusioned by a consumer-driven lifestyle and have instead turned their focus to experiential-based living.”

That’s the case for Laura LaVoie, who extols the tiny house lifestyle on her blog, “Life in 120 Square Feet (120squarefeet.com), and her book, “120 Ideas for Tiny Living.” She stresses that it’s not about the house. “Changing the way you think about how you live and how you use space is far more critical,” she explains.

For LaVoie and husband, Matt, who built a tiny house on property north of Asheville, the downsized, diminutive dwelling offered the unconventional living arrangements they had been seeking. “It represented freedom to us,” she says. “I love where it is. I love that we are in the middle of the Smoky Mountains and can step out of our door all year long and see the beauty all around us.”

Like LaVoie, many tiny house owners cite the freedom and more intentional or mindful living that seem to be part of the tiny house philosophy. Many want to simplify their lives — indeed, the lifestyle requires fewer belongings — live less stressed, leave a smaller footprint, make more time for people and hobbies they love, be debt-free and reduce utility costs.

“Tiny homes demand very little energy to heat and cool, due partly to green building practices but mainly due to their small size,” Brown says.

Heating and cooling a smaller space results in much lower bills for the homeowner. When you compare costs to heat and cool only a few hundred feet, utility costs can run a tenth of the $200 to $300 it can cost for an average size home. It’s no wonder these small packages have such appeal.

Innovative products, says Brown, allow for both savings and comfort. He cites an efficient wood stove used for tiny houses as an example. It allows “users to forego a heavy reliance on electricity or gas by heating with wood, which can reduce energy costs,” he says. “Like many of the multi-functioning features in a tiny home, the stove does triple duty by allowing the user to heat, cook and create low-voltage current for lighting and for charging batteries.” 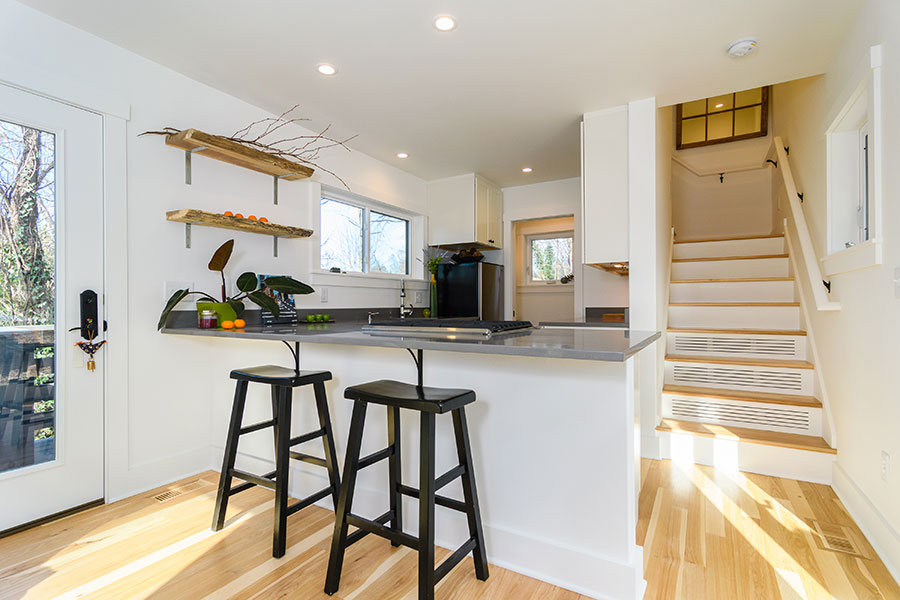 Others may use stove range tops that run off alcohol fuel. Some may use special propane heaters. One of the tiny house models that Brown builds, known as the Z Huis, includes a 1-kilowatt solar photovoltaic system on the roof, backed by a 420 AH battery bank.

The average size single home is 2,697 square feet with an average sale price of more than $300,000, according to the U.S. Census Bureau. The average tiny house is built for $25,000 in materials, according to tinyhousegiantjourney.com. Prices vary based on whether it’s a do-it-yourself project, and the materials and appliances used. Add up the difference between a mortgage on an average-size house versus a tiny house and you have more reasons there is a growing number of people opting to go this route.

Greater financial freedom gives people more time to pursue the things they enjoy rather than working to pay bills.

LaVoie says that as soon as her tiny house was built in 2012, she and her husband quit their jobs and moved to the mountains.

“Building and living in a tiny home profoundly changed my life, and it had very little to do with the house itself,” she says. “It was a catalyst to see things differently and change my action accordingly. By getting rid of the mortgage, I could make significantly less money and be comfortable. By moving into a tiny house with no expenses, I could stretch my money even further.” 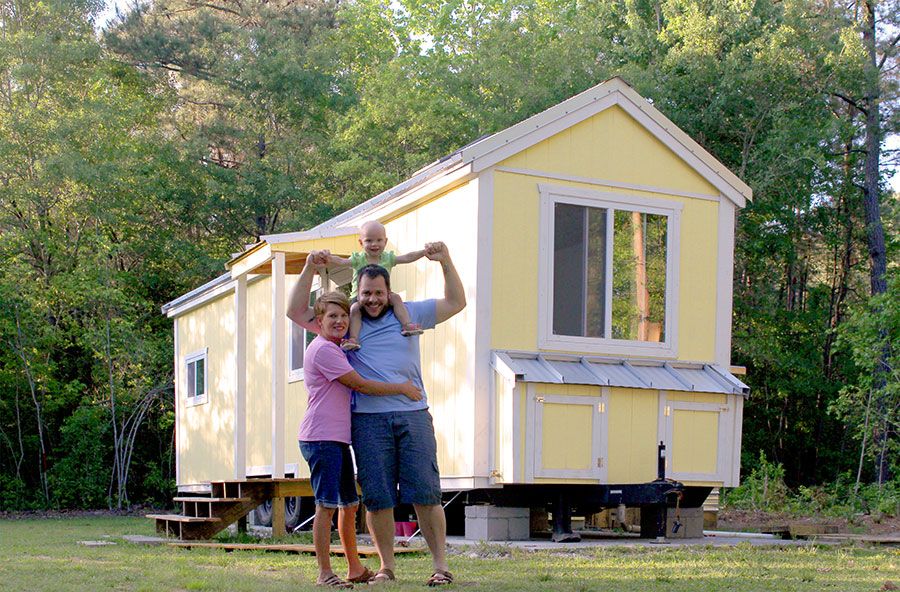 TinyHouseNC founder Andrew M. Odom, shown with his wife Crystal and daughter Tilly Madison, has lived “tiny” in several different ways since this photo was taken in early 2012. They first lived in a converted woodworkers shop, then the tiny house on wheels shown here. His family currently lives in a small house in rural eastern North Carolina. (Photo by Andrew M. Odom)

Andrew Odom, a Four County EMC member in Duplin County, was hesitant to take on the loan for which he and his wife were pre-approved when they were looking at buying a home several years ago. When they began researching non-traditional housing, they came across the tiny house concept. They ended up building a 240-square-foot house where they lived for two years until their growing family required more space.

Odom sees great potential in tiny houses helping solve housing needs in the state. Toward that end, he organized last month’s Tiny House NC Street Festival in Pink Hill to bring together national speakers, including LaVoie, who are active in the tiny house movement. Odom’s goal was to be a catalyst for Carolinians to rethink the housing situation in the state.

“North Carolina is in need of modern, affordable, attractive, housing solutions for situations like government-subsidized housing, disaster relief housing and micro-housing for young professionals,” he says. He touts tiny houses as possible solutions.

In some areas, these small structures are being used to help reduce homelessness. Tiny Houses Greensboro is a nonprofit that is creating a tiny house community to provide a stable housing environment and community support. They partner with the City of Greensboro to develop land and address building codes and zoning issues. They also work with local housing organizations that assist in qualifying potential residents. Residents are required to participate in construction and other volunteer opportunities.

A few tiny house communities are popping up around the state. The Village of Wildflowers near Flat Rock has high-end houses that are 400 square feet and a few that are 150 square feet. Noah Palffy says the development has taken off, going from 15 homes to nearly 60 in the last six months of 2016.

“It happened overnight,” he says. “We were featured three times on Tiny House Hunters on HGTV, and that has a lot to do with it.” 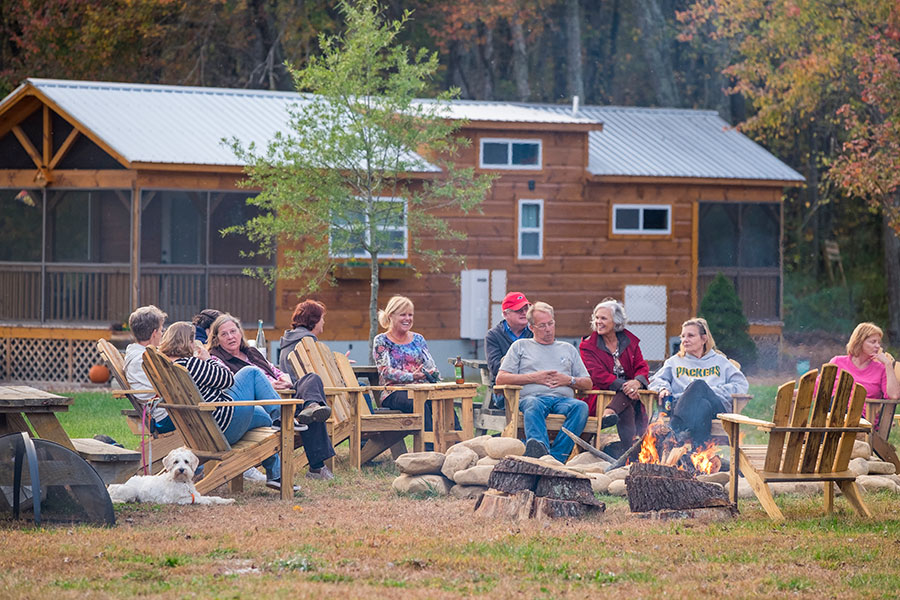 The Village of Wildflowers gives you a chance to try the lifestyle before taking the plunge and ridding yourself of belongings. They have rental options for a short-term stay from a couple of nights to a month or more. Their common areas include a village hall for community gatherings and activities and outdoor spaces such as pools, fire pits and a dog park.

Tiny houses are sometimes used as a way for an aging parent or grandparent to be as close as a walk through the back yard but still have privacy and some degree of independence.

In some locations, tiny houses that are built on a permanent foundation behind or beside another larger home may be referred to as an Accessory Dwelling Unit (ADU). It may be legal to build, depending on the zoning ordinances. Brown says that in some locales, such as Asheville, tiny homes help address housing needs.

“Read blogs, read books and get a real sense for what a tiny house is,” she advises. “The truth is, living tiny has never been about the house, and you don’t have to have a 120-square- foot home on a trailer to adopt the lifestyle.