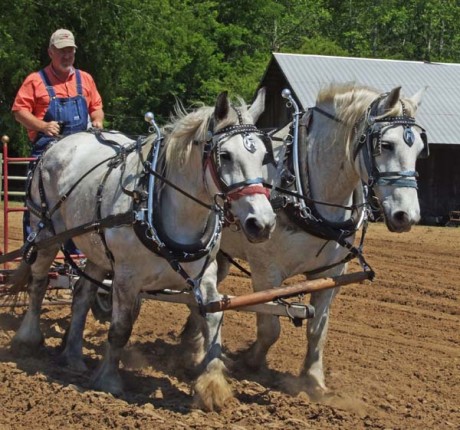 Many of the plow teams are Percheron draft horses. The massive black or gray horses can stand six feet at the shoulder and weigh nearly a ton each.

On a sunny Saturday morning, a group of horsemen assemble in a windswept field outside Broadway, N.C., and watch as John Hudson harnesses a dream team. Six massive Percheron horses weighing nearly a ton each, four blacks and two grays, stand three abreast before a new Pioneer two-bottom plow. With a word from the driver, the six surge forward as one, and the plows are lowered into the sandy loam. The team soon finds its rhythm and dirt peels from the glistening plowshares. After a few minutes of shared admiration, other teamsters return to their horses and begin cutting their own inspired furrows.

Man and beast have toiled together like this in the fields of North Carolina for more than 300 years. It was an essential task of brute labor, filled with sweat, dust and blisters. Many of our grandparents spent their youth lining up furrows behind a team of mules and praying for the day their daddy could afford a tractor. How amazed they would be to learn that horse plowing is one of the fastest-growing equine activities in the state today.

North Carolina's very active horse plowing club, the North Carolina Work Horse and Mule Association, hosts a number of plow days and heritage farming demonstrations throughout the state and has experienced considerable growth in membership. "We started in 1999 with only six members and now we have over a hundred," said Debbie Denton, past secretary of the N.C. Work Horse and Mule Association. "We have been inspired by the efforts of organizations in other states and by publications such as Rural Heritage, which promotes the use of draft animals in farming. This is what the term 'living history' is all about."

On Saturdays throughout the spring and fall, club members at designated field days work their teams and help visitors understand the fine art of turning soil. Events held in the eastern part of North Carolina are often the best attended, since teamsters and animals alike appreciate the ease of working in the sandy, rock-free fields. It is not unusual for more than a dozen participants to attend a plow day, along with an amazing array of animals and equipment. Although plowing is generally considered to be the forte of mules and draft horses, almost any animal can be trained for the job. Don't be surprised to see oxen, ponies, donkeys or even a water buffalo take their place in the furrow. Most work is done with pairs, but multiple hitches of three, four or six are common sights at Carolina plow days. 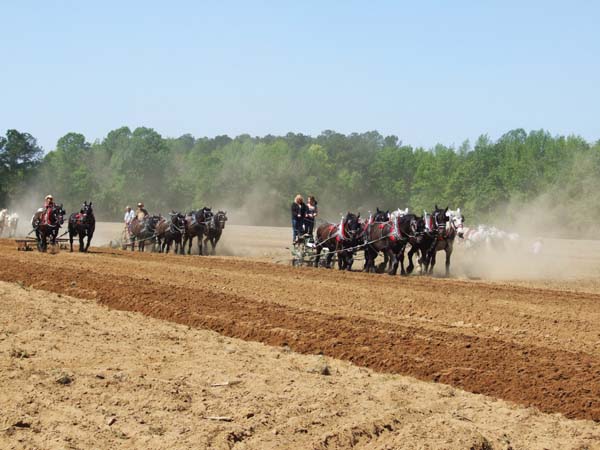 A tradition with meaning

Equipment can be as diverse as the animals. You can quickly recognize the familiar wooden-handled walking plow, but many teamsters opt for the sulky or riding plow. Many of the implements are meticulously restored antiques, but an equal number are newly manufactured. Many countries still depend on animal power for agriculture, as do the Amish in the U.S., and the equipment is designed specifically for these markets. "Most people think that improvements to horse-drawn farm equipment ended around the turn of the century," says Denton. "But technology has continued to make plows easier and safer to use, and this has helped animal power to remain a viable alternative in many situations."

Regardless of whether their equipment is new or antique, most teamsters feel a deep responsibility to the tradition of animal-powered agriculture and try to portray yesterday's farming practices as accurately as possible. "Education is a big part of what we do," says Denton. "Many children today have no idea where their food comes from. When they see us doing a demonstration, we want them to understand that what we are doing was once a vital life skill."

While tradition is important, most will say that it is the bond formed with their animals that brings them to the field. Plowing looks easy when done well, and the casual observer seldom realizes what a challenging feat it truly is. It can take many hours in the furrow for both plowman and team to master slicing earth in a straight line. The walking plow is especially difficult, as the driver must guide his team using both hands on the handles to keep the furrows straight. Teams often train with one person on the reins while another handles the plow, but with practice, the plowman and his animals develop a rapport that defines teamwork. "Being out here takes away the tension that I've built up all week," says Walter Cleary, wiping his brow behind a pair of sorrel mules. "The old folks thought that the outside of a horse was good for the inside of a man. I couldn't agree more."

The renewed interest in horse plowing has even earned official recognition. In 2009, the North Carolina Agricultural Commissioner sanctioned the first State Championship Horse Drawn Plowing Contest. Now in its fourth year, the event is held in June at the historic Ivy Burne Plantation near Linden and draws exhibitors from across North and South Carolina. Horses, mules and oxen compete for honors in a variety of classes, including walking plow, antique and modern riding plow, and a multiple hitch division for teams of three or more animals. Judges assess each entry in a designated plot, looking for the straightness, uniformity and coverage of the furrow, as well the proper adjustment of equipment, and the appearance and performance of the team. Competitive plowing matches are uncommon in the U.S. but have a serious following in Canada, England and parts of Europe. Sponsoring the event has been a dream of the N. C. Work Horse Association for a long time, says Denton. "We hope that with increased sponsorships, it can continue to grow and draw participants from nearby states."

North Carolina plowmen have also set their competitive sights on a larger scale. In 2011, club members Jessee Aldridge and John Flowers and their teams journeyed to Ohio to compete in the National Plowing Championships, earning second and third placings in their divisions. Their impressive effort has led to an open invitation from the National Championship committee to members of the N.C. Work Horse Association.

Visitors are always welcome at plow days, including those who wish to experience plowing firsthand. Children and teenagers are especially encouraged to try their hand at a skill that goes back more than 5,000 years, yet still puts food on the table in many parts of the world. One word of caution: plowing can be addictive. Most of today's teamsters discovered their passion with a visit to a plow day. All you need is an appreciation of working animals and the will to transform a job into a labor of love.

Tina LaValle is a farm secretary and freelance writer who lives in Randolph County. A lifelong horsewoman, she has been involved, along with her husband and son, in plowing for the last six years. The family is a member of Randolph EMC.