Dream it. Believe it. Do it. - Carolina Country
Feature Story

Dream it. Believe it. Do it.

Teaching how to win on the court and in the classroom 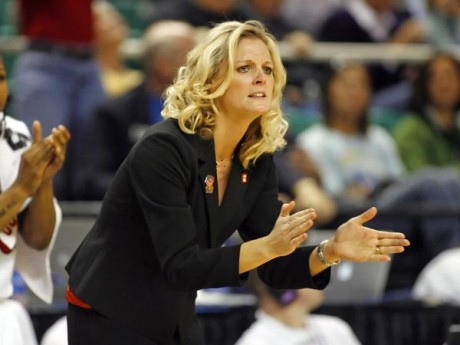 Kellie Harper, head coach of N.C. State University's women's basketball team, at the annual Bright Ideas education grant awards luncheon in Raleigh Nov. 10 shared her team's motto —  Dream it. Believe it. Do it. — and the inspirational story of her bumpy road to success.

Harper spoke to 150 Bright Ideas grant winners from central and eastern North Carolina at NCSU's Dail Club overlooking Carter Finley Stadium. From the lectern among tables draped in vibrant red, blue, yellow and green, Harper drew on the lessons she's learned as a basketball player and coach. She encouraged teachers to help their students dream big, believe in themselves, work hard to achieve their goals and look for opportunity in setbacks.

Harper's strong southern drawl gives away her small-town Tennessee roots, where she developed a love of basketball and the courage to pursue lofty goals at a young age.

In fourth grade she began practicing every day. "My dream was to be a college basketball player. I was a small-town star, but I wanted to do this at a higher level." The University of Tennessee awarded her a scholarship, and she earned a degree in mathematics while playing on three national championship squads under Hall-of-Fame coach Pat Summit. She was inducted into the Lady Vols Hall of Fame in 2009.

Now, as she begins her third season with the Wolfpack Women, Kellie Harper encourages her players to believe in their dreams and challenges them to exceed expectation on and off the court. Her players are known for giving 100 percent effort no matter the score, and her squads consistently rank in the Women's Basketball Coaches Association's "Academic Top 25."

She took over at N.C. State in 2009 for the legendary Hall-of-Fame coach Kay Yow, who had lost her battle with breast cancer. That year, the Wolfpack Women defied predictions of a mediocre season, finishing on a 4-1 run and making the NCAA tournament. "You're the only one who has to believe, but you have to believe," she said.

Just as she challenges her players on the court, Harper challenged teachers at the awards luncheon to find opportunity in setbacks. "Failures are inevitable and rocky roads are always ahead," she said, "but you don't have to let it slow you down. You just create new destinations, set new goals, and dream new ideas for yourself."

Harper did just that when she was cut from a basketball team for the first time in her life. She graduated from college on Friday, married her husband John on Saturday and reported to the WNBA's Cleveland Rockets on Sunday. She played a total of four minutes before being nixed from their roster. "That was hard, to realize that for the first time in my life, basketball wasn't good enough. It stung."

Harper traded in her jerseys and trainers for suit jackets and high heels, and she moved on to coaching. She spent five seasons at Western Carolina, leading the Lady Catamounts to three consecutive Southern Conference Tournament finals. In 2007, she was named the Southern Conference Coach of the Year.

On the court, Harper fosters a relationship where each player is responsible for bettering the team, and she encouraged Bright Ideas winners to integrate teamwork in the classroom. "If I help you get up the mountain," she said, paraphrasing a Tibetan proverb, "then I'm up the mountain, too."

"I hope you know that you are changing lives," Harper told the educators. "You don't get to see that immediately, but on down the line, you never know what your students remember."

Lindsey Listrom is the community relations specialist with the North Carolina Association of Electric Cooperatives.