From Linus, with love 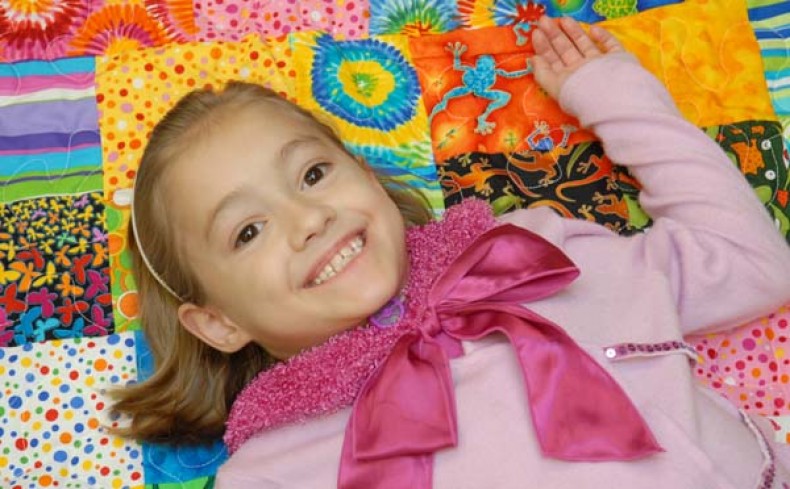 After a young girl's home in northeastern North Carolina had been destroyed by fire, her mother went to stay at a faraway hospital with the girl's injured brothers. A Red Cross worker later visited the home of the girl's aunt where the child sat in a chair, somber and withdrawn.

"You could tell she was struggling — she was dealing with a lot," says Carolyn Self, director of the Greater Albemarle Red Cross chapter. Self had brought a stuffed animal and a kit with toothpaste, soap and other personal supplies for the family. But she also had something extra for the girl — a brightly colored homemade quilt. "She sat there with that quilt and she wrapped it around herself. Afterward she started to open up and talk to me. That quilt made her feel comfortable, made her feel like somebody was caring for her."

That caring somebody was a stranger — one among thousands of people across the country who stitch, knit and crochet their way into the hearts of children suffering from illness, injury, trauma or poverty. They are volunteer blanket makers or, as Project Linus calls them, blanket-eers. Karen Loucks of Denver, Colo., founded this non-profit organization in 1995. The name received the blessing of Charles Schulz, creator of the Peanuts comic strip. In the hands of his character Linus, the security blanket had become an icon.

Since Project Linus began, blanket-eers have created and donated nearly 5 million blankets. About 165,000 of those were made in North Carolina, which has 14 chapters in 45 counties across the state. Each chapter donates most of its blankets locally to hospitals, shelters, social services, law enforcement or relief agencies, anywhere they're needed in the community. If there is a surplus, blankets are sometimes sent to other states scarred by natural disaster or tragedy. For example, North Carolina joined with other states to send blankets to children affected by Hurricane Sandy, the mass shooting at Sandy Hook Elementary and the 9/11 attacks.

Blanketeer Cyndy Ward of Elizabeth City got involved in Project Linus through her quilt guild. "I thought it was cool that Project Linus made blankets for kids in crisis without having to qualify them in any way," she says. "It's not just for poor children or a particular class of children. If a kid is in pain, physical or mental, we can give them something that will give them immediate, lasting comfort. These blankets are like magic. Children really have an amazing response to them."

Many Project Linus volunteers are practically addicted to making blankets. At 104 years old, Emily Harrell of Elizabeth City is still quilting for the charity. Her youngest daughter, Peggie Anderson, quilts with her mother, who made 33 quilt tops in 2012 — that was a slow year, she says. Seventeen years ago, "Miss Emily" bought a mid-arm sewing machine (a type more accommodating for machine quilting) and never looked back. Peggie, a faithful assistant, hurried to keep up. "She'd get on there and be zipping right on down. She'd get to the end of one side and say, 'You need to turn it' or 'I need a new bobbin.'" 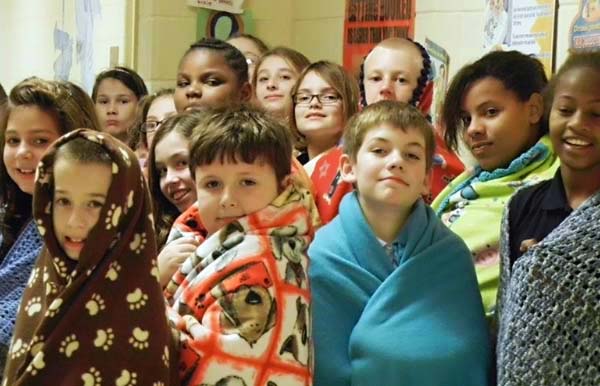 The busiest chapter of Project Linus is probably the Western North Carolina chapter, which spans 12 counties. Since its formation in 1998, the chapter has created nearly a third of the donated blankets in North Carolina. The 50,000 mark is close at hand, says coordinator Ellen Knoefel of Weaverville. In addition to traditional blankets, this chapter's blanketeers also make specially weighted ones designed for children with autism and sensory processing disorders. "It's been proven that weight calms the children," she says. Knoefel keeps shells (unstuffed covers) on hand. "When I get a request from an occupational therapist, I need to know the size of the child. We make it 15 percent of the child's body weight. Then I stuff it with donated bed linen."

Amy VanCamp, an occupational therapist with Carolina Pediatric Therapy in Asheville, has seen firsthand the power of a Project Linus blanket. "These weighted blankets kind of make you feel like you're getting a big hug," she says. "It's similar to swaddling a baby." Weighted blankets help keep the kids calm, relaxed and better able to sleep, she says. Many of their clients, such as those served by Medicaid, can't afford to buy a commercially made weighted blanket for their child, she says.

Blanketeers rarely learn the identity of the children who receive their gifts — the blankets are given to an agency or organization that delivers them to where they are most needed. Individuals or groups can put their name on blankets if they wish, but many blankets bear only a Project Linus tag with a link to the national website. Parents often send thank-you notes via the national organization, which shares them with coordinators.

How you can get involved

Project Linus can be a fun, rewarding service opportunity. Blanketeers work solo or in groups such as clubs, schools or places of worship. Coordinators suggest that potential blanketeers check with them to see if they are low on blankets of particular sizes or types. Project Linus also accepts donations of money or supplies such as fabric, yarn, thread or other craft materials, even sewing machines. They also need volunteers for tasks such as sewing labels on and inspecting finished blankets for quality and hazardous items such as pins.

Anyone can contribute to Project Linus, including those without needle skills. Though crocheted afghans, quilts and knitted blankets are among some of the one-of-a-kind creations, beginners may try their hand at no-sew blankets made of polar fleece, with the edges fringed using scissors. Blankets made for Project Linus must be new (nothing "gently used"), homemade and washable (no animal fiber). They must be free of smoke and pet dander. And they should not have buttons or other embellishments that might be harmful if detached. Coordinators recommend that volunteers use fabrics that are colorful, whimsical or otherwise "child friendly" in design. Because Project Linus serves children from infants to 18-year-olds, volunteers make blankets in a range of sizes, as small as 36-by-36 inches for infants to twin sizes for teens. Some people make tiny blankets for preemies.

The Project Linus national website has links to patterns of all kinds, for all skill levels, including a no-sew fleece pattern. To donate a blanket, contact the coordinator in your area to find the nearest drop-off point (stores and other participating sites). For more information, contact projectlinus.org or your nearest chapter.

Watauga/Avery, a former chapter of Project Linus, is now operating as the Blue Ridge Blanketeers. Contact Nanci Tolbert-Nance at ntn@skybest.com.