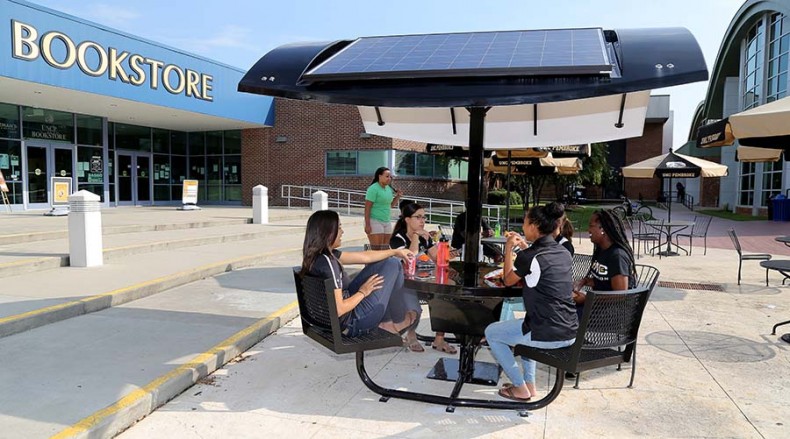 Sit, chat and charge – a popular pastime at UNC Pembroke, where a solar-powered charging station is built into a patio table.

At UNC Pembroke, what started as a student effort to get local food in the campus cafeteria on a consistent, non-seasonal basis has blossomed into a full-fledged, student-financed environmental initiative. It includes solar energy but goes beyond it. 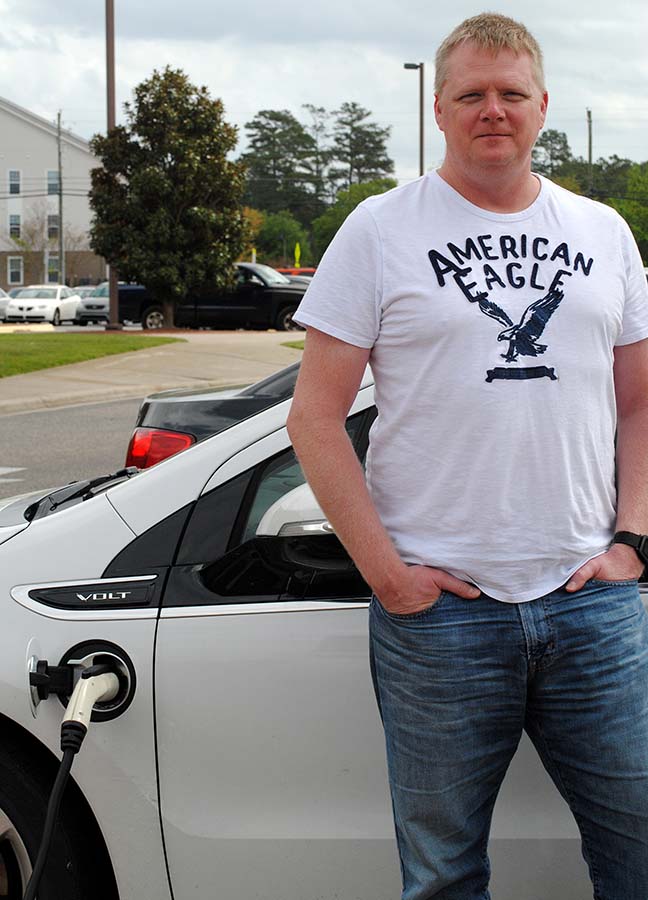 His manufacturing technology students use the setup to deal with the kinds of challenges they’ll face in future jobs — calculating electrical load and figuring out how to meet it, working with statistical data, and managing wireless networking.

Fired up about food

Justin Duncan of Raleigh, now a coordinator in Pembroke’s sustainability office, was one of those students who first pushed for more local food back in 2013. A reduced carbon footprint was the idea; the fewer trucking miles, the cleaner the air.

The process has been slow; there are regulatory hurdles. But food services director Sandra Jackson says she’s talking with Eddie Moore of Moore Brothers Natural in Waculla in hopes of getting some of his beef in the cafeteria this school year (see sidebar).

“[In 2013,] we were energized and charged up and ready to take on the world of local food,” Duncan remembers. “There were students interested in working for that cause, but they wanted to do more.”

They formed a Greener Coalition that successfully lobbied other students to support a $5 activity fee for green causes. 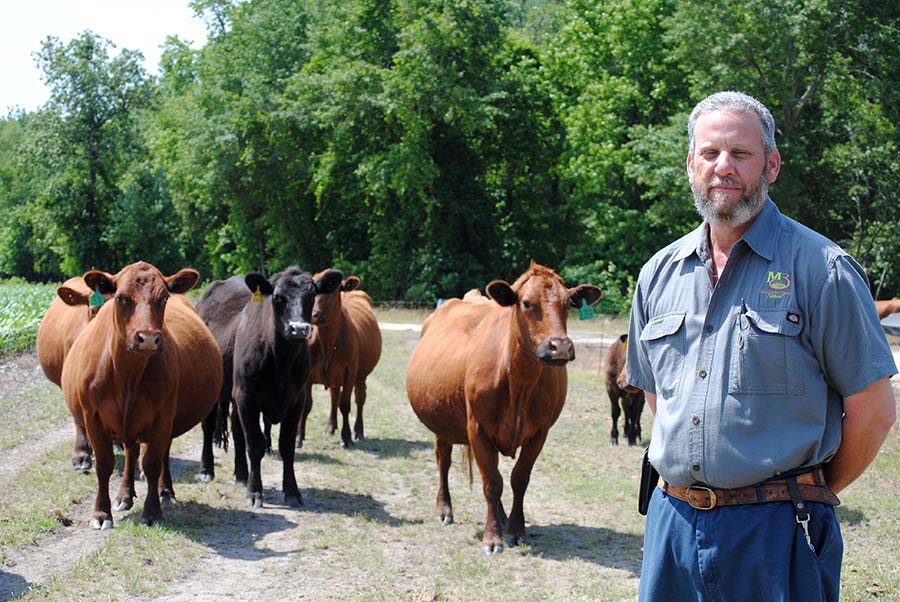 Where’s the beef? Grazing on a 200-acre Robeson County farm, and shortly (some UNC Pembroke students hope) on food trays in the college cafeteria.

The initial goal of the student green movement, combating highway pollution by acquiring food close to home, may be met in the coming school year. Cattle farmers Eddie and Luther Moore, owners of Moore Brothers Natural and members of Lumbee River EMC, are working with the college food service to make that happen.

Justin Duncan, a former movement leader and now a coordinator in the college’s sustainability office, says local food encourages a connection between the college and the community.

And nobody could be more closely connected than the Moores. Their great-grandfather, the Rev. W.L. Moore, a member of the Lumbee Tribe, was the first headmaster of the school that grew into UNC Pembroke. Moore Hall is named for him

Now, every time students gather outside the college bookstore to snack or talk, they can enjoy a result of that effort. A solar panel in a canopy over one of several outside tables fuels a cell-phone and computer charger in the canopy’s base.

Batteries store the sun’s energy so that the station can operate 24/7.

“Most of the time, that solar table is the one people crowd up at,” says Jay Blauser, a member of South River EMC and Pembroke’s sustainability director.

Solar panels also feed four parking lot charging stations for electric cars. Adam Kelly drives his Chevy Volt 35 miles between Fayetteville and Pembroke three times a week. What does he have to say about the charging option? “This is awesome.”

The impassioned students wanted to involve others in their environment-saving quest, so the activity fee, since raised to $7, supports other green projects. They’re carried out by Blauser, energy management director Terry Divine and two interns whose salaries are paid by the fee.

Among other tasks, intern Jay Ritchie of Salisbury spent hours one day last spring reading electric meters at dormitories and student apartments to determine who was saving the most energy — and therefore deserving of a pizza party. Intern Kayla Cox of Kinston collected unserved food from the food services department for local anti-hunger efforts.

Freshmen and new staff members are greeted by an orientation in energy-saving, and, thanks partly to the green movement, the college this year will add a sustainabilities minor to its academic curriculum.

“Watts” up at Edgecombe Community College? For one, a 30-foot-tall vertical axis wind turbine outside the manufacturing technology building. A solar panel is another.
Lacking strong winds at its inland location, the turbine’s output is minimal. A wind speed of 27 mph — unusually strong for Edgecombe County — would produce 1,000 watts, only enough to power a hair dryer.

“You could always dry your hair on a very, very windy day,” Garren jokes.

That output is far too small to go into Edgecombe-Martin EMC’s campus grid. But, paired with the solar panel and a charging system, the turbine-as-learning tool “probably has more impact than if it were tied into the power system on campus and we were trying to run a light,” Garren says. 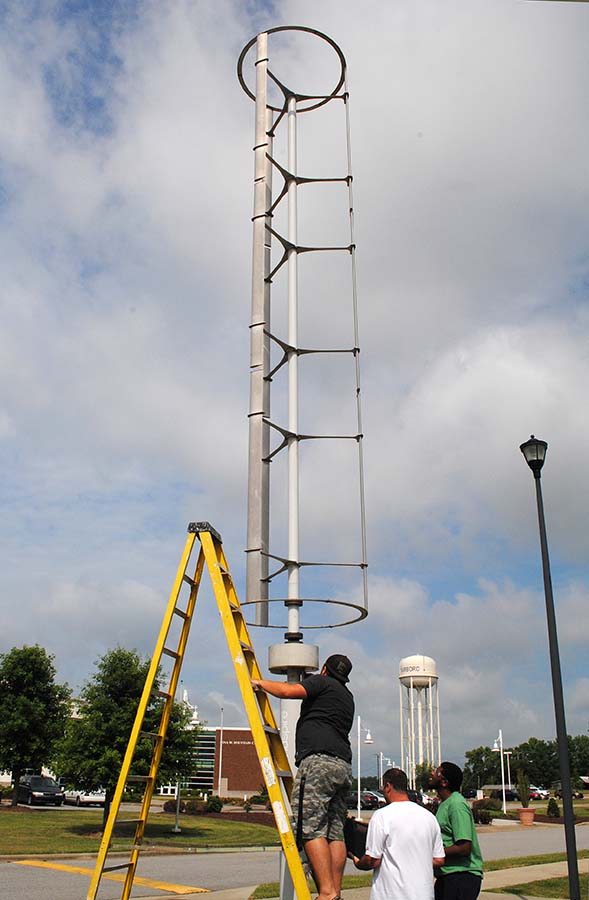 The turbine and nearby solar panel fuel batteries that run a remote weather station in the same parking lot. The station uses FM radio waves to send real-time information on wind, temperature, humidity and barometric pressure to a receiver in the building, which puts the information in digital form.

Energy management students “have to figure out how much power they can expect from the solar panel and the wind turbine, and how much storage they need the battery to have,” Garren says.

The weather station requires a constant 40 watts, but the supply of sun and wind varies. Students work through real-world questions such as optimal battery size, according to Garren. And their involvement leads them to broader questions, like:

“How do you measure humidity?”

“Solving the problems — students enjoy that,” he says.

After the receiver puts the weather information in digital form, it’s up to Garren and students to decide how to display it on their dedicated webpage. “Students can basically create how the data appears,” he says

In analyzing the weather statistics, they use the same tools that industry uses in quality control. And working with the receiver-computer system teaches about wireless networking, a mainstay of modern manufacturing. The whole system is hands-on.