What if North Carolina could produce its own organic cotton and turn it into clothing made here, just like in the old days? 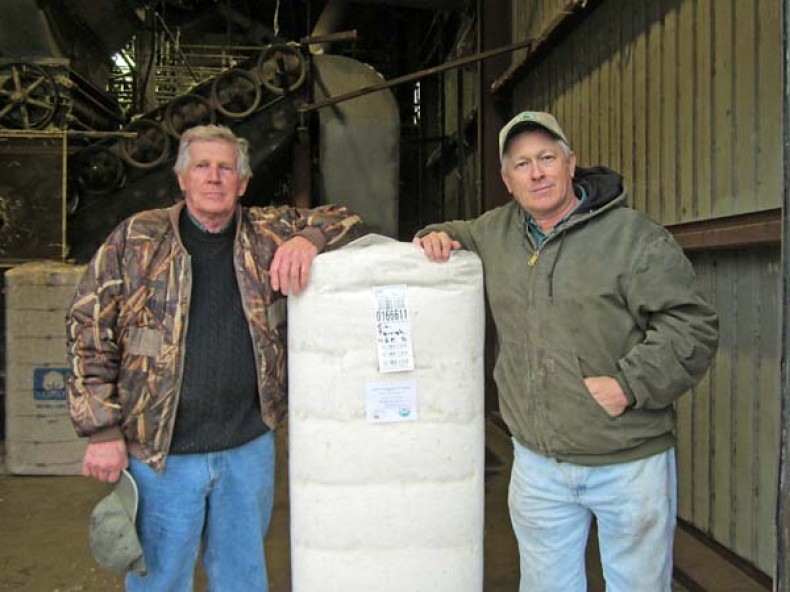 An old African proverb says that it takes a village to raise a child. It took a similar cooperative spirit to accomplish something extraordinary in North Carolina's textiles industry during the past year. The mission was to grow organic cotton, turn the fiber into thread, the thread into cloth, and the cloth into clothing — all without leaving the state. Accomplishing this feat took two risk-taking farmers, a skilled crop consultant, a garment-maker committed to domestic production and a screen-printer who was determined to feed North Carolina's economy with a locally made, environmentally friendly commodity.

The journey began in spring 2011 on two farms in the state's Coastal Plain, one in Nashville owned by Lewie Parrish and one near Whitakers owned by Orpha Gene Watson. Collectively, they planted about 65 acres of certified organic cotton and produced 25,000 pounds of fiber. They succeeded without using any chemicals on their cotton, something that few farmers have probably done in North Carolina since synthetic herbicides and pesticides hit the market in the mid-20th century. Parrish and Watson lost some of their crop to weeds and sporadic poor growth. But they didn't lose their shirts. From the outset, the risk was solely theirs, though someone had made a good faith offer to buy as much of their cotton as possible and find homes for any remainder.

By last February, all the cotton was sold and ready to be converted to finished goods without ever crossing the state line. This kind of local supply chain is nearly unheard of in today's globalized textiles industry. Most cotton grown for apparel, from fiber to finished product, follows a dizzying, circuitous route around the globe in the chain of production. Eric Henry, an instigator of the state's organic cotton experiment, estimates that by the time cotton is harvested, processed and made into a T-shirt, for example, it has traveled some 17,000 miles in its journey to the retail shelf. Henry owns TS Designs, a Burlington company that colors and screen-prints T-shirts using low-impact dyes and water-based inks. His business model is to stay solvent while using as much sustainable material and local labor as possible to produce an environmentally friendly product. Hungry for a reliable source of domestic organic cotton for his organic T-shirt line, Henry started a conversation in the state's agricultural sector about whether quality organic cotton could be successfully grown in North Carolina and whether any farmers might be willing to give it a try.

From dirt to shirt

Fortunately, Henry already had a tested model. In 2008, he established a relationship with a Stanly County farmer who grows cotton by conventional methods. Henry convinced him to sell him some of his wholesale fiber, which would be the source of cotton for his T-shirts. Henry partnered with Brian Morrell, a Wendell apparel manufacturer, to create a "Cotton of the Carolinas" brand. Their mission was to keep the chain of production in North Carolina, and they have succeeded. From start to finish, the cotton passes through hundreds of hands and at least five businesses in the state. Henry boasts that the T-shirts go "from dirt to shirt" in under 750 miles. "Cotton of the Carolinas is the only apparel line I know of that is completely transparent, from the consumer all the way back to the farmer," he says.

The organic cotton harvested last year is following a similar route. Henry purchased 10,000 pounds of organic cotton from the farmers and helped broker the sale of the rest to other North Carolina businesses. Raleigh Denim was among the eager customers. A company spokesperson said the business bought 775 pounds of raw cotton, enough to make 2,000 yards of fabric for 600 pairs of its high-end jeans, which are cut and sewn by hand in a downtown Raleigh workshop. 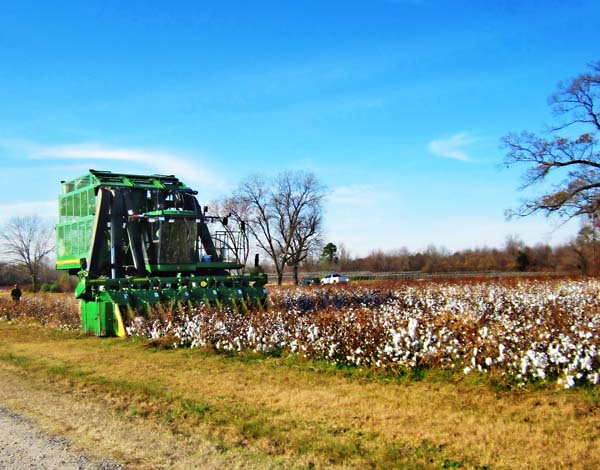 To help bring their organic cotton to fruition, the farmers Parrish and Watson hired Mary Wilks, a certified crop consultant who was already working with them on other organic crops, including sweet potatoes, soybeans, tobacco, figs, blackberries and butterbeans. She monitored the cotton throughout the season — scouting and troubleshooting — helped with marketing and completed piles of the government paperwork that accompanies organic farming. To be certified organic by the U.S. Department of Agriculture, a crop must be grown without chemical fertilizers, pesticides or herbicides, and the seeds must not have been treated or genetically modified, such as for resistance to herbicides. Also, the land must have been free of any chemicals for three years.

Organic farmers use multiple strategies, including incorporating animal manure to make the soil fertile, orienting crops a specific way to shade out weeds, timing the planting to avoid the most damaging life stages of pests, using only approved natural pesticides, and controlling weeds by hand or cultivation machinery. Organic cotton farmers must depend on frost to naturally defoliate the plants before harvesting the bolls. Leaves add extra trash to the harvested fiber and may also stain the lint. Conventionally grown cotton is defoliated by herbicides as soon as bolls are mature. Due to a late frost this past fall, the organic cotton plants shed their leaves uniformly and cleanly, says Wilks.

Wilks says weeds were the biggest obstacles they faced last year. In spite of the challenges, 77 percent of the fiber grown was usable, and the quality was above average among cotton graded in the Southeast, she says. Organic cotton prices for the U.S. crop in 2011 were 50 to 60 percent higher than non-organic prices, says Wilks. North Carolina farmers sold their organic cotton for $1.75 a pound. By comparison, conventional cotton brought 72 cents a pound in 2010, according to the N.C. Department of Agriculture and Consumer Services. It's more expensive to grow organic cotton due largely to the extra labor involved. Watson says no one can predict whether organic cotton will become a game changer here. "At this point, the bottom line is you're not making any more money on it than you are regular cotton," says Watson, who still grows most of his cotton conventionally.

"The profit margin for organic cotton at this time is not as high as some other organic crops like vegetables," says Wilks. "However, it is a good crop to add to the rotation, and North Carolina buyers have said they want more of our product." For now, Parrish and Watson are sticking with it — they sowed 45 acres for the current season, says Wilks. She thinks at least 1,000 acres could realistically be cultivated in the state. Organic cotton farms in the United States range in size from a few dozen acres to 4,500, according to the Organic Trade Association. Texas is the largest producer.

Organic cotton makes up a tiny fraction of cotton produced in North Carolina (800,000 total acres of cotton were harvested in 2011) and in the United States. Of the 10 billion pounds of cotton grown in the country in 2010, only 6.3 million pounds were organic, according to OTA and USDA statistics. However, the USDA's Economic Research Service reports that organic farming overall is one of the fastest growing sectors in U.S. agriculture, and organic cotton is part of that trend.

Cotton of the Carolinas:
www.cottonofthecarolinas.com