I ran across this photo of our big Red Island Rooster. He was much more of a pet than a rooster. He was among 24 biddies that came to us one Easter. Until they were older, we could not tell which were chicks or which were roosters. He was about the only rooster that survived. He quickly became a pet, of his own choice. He was named Bock Bock because when he ate scratch food, between bites, he seemed to be saying “bock, bock.” As if to say, “this is the best food I have ever eaten!”

Bock Bock quickly became friends with our German Shepard, Cameo. They hung together most of the time. Bock Bock even ate dog food with Cameo and slept with him. Cameo was named that because his coat was of so many different colors. Cameo took great pride in rounding up the chickens when a truck needed to unload at the dock of the business.

However, Bock Bock himself was also protective of the place. When he saw a truck coming on the property, he refused to let the truck come more than just a little distance, then would not allow the trucks to go any further. Bock Bock was protecting his territory. The truck drivers finally figured a way around the guard rooster. They bought a box of Cheerios. When they first drove in the lot, they would roll down the window and throw a handful of cereal out as far as possible. They know that Bock Bock would eat until they could unload and leave! This maneuver was quite successful. 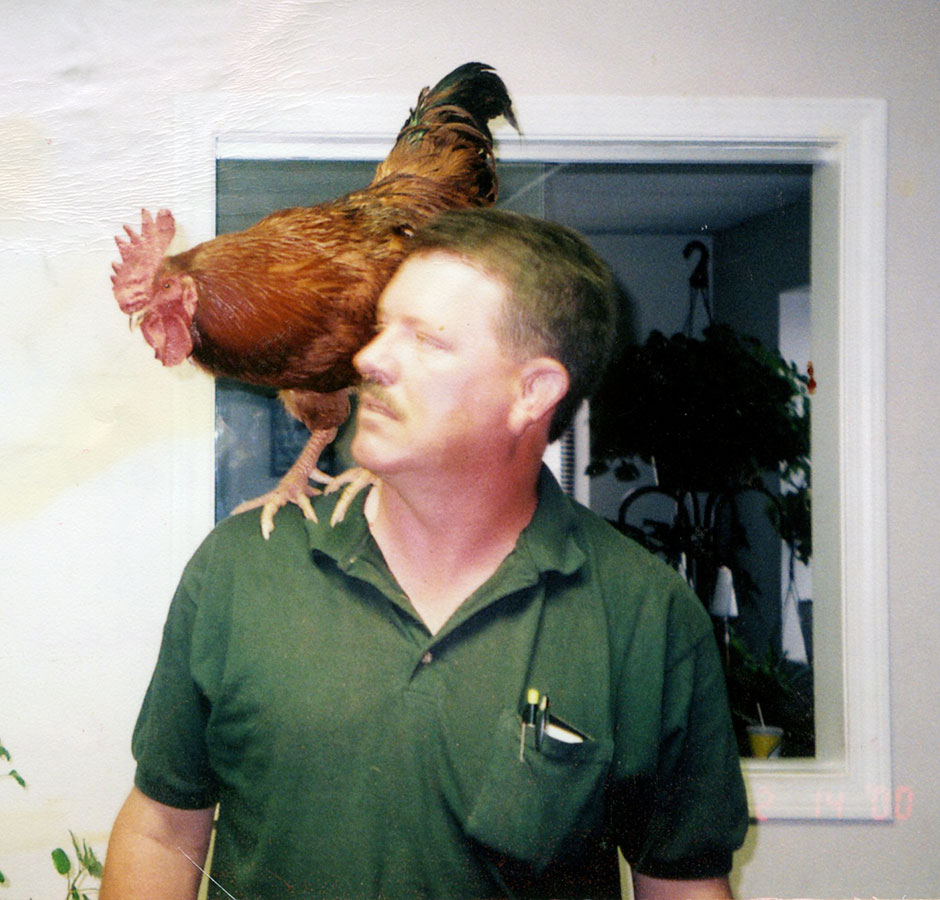 I found a tiny pair of white Reebok tennis shoes at a thrift store that just fit Bock Bock. He allowed us to put them on him and he strutted his stuff in them.

I wrote the Reebok Company suggesting that in my opinion Bock Bock would make a real successful TV commercial for then to feature Bock Bock in his tennis shoes. I suggested the commercial could have him say something like, “My name is Bock Bock, and I wear Reebok.”

Well, I tried many times to contact them by every means I thought possible, but they refused to either talk with me or allow me to explain my plan. I figure it is their loss.

Bock Bock by himself was on guard duty in the office every morning. He would wait at the front door until it was open, then go in first to case the joint out. This is just a part of his regular routine in and around the business. (In reality, after he looked around, he would go toward the green plants growing in the office and peck around hoping to find a bug of some kind.)

I find Bock Bock very fascinating, but it may be because he was a part of our lives. A call to the vet told us roosters usually live only seven years, if they are healthy and taken good care of. Bock Bock was certainly that.