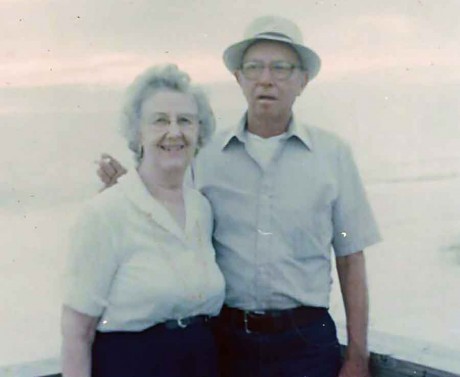 In 1958, our family camped at Myrtle Beach, South Carolina, for the July 4th week. We loaded up our Standard Coffee Panel truck and left home about 1 a.m. on Saturday morning after Dad completed the second shift at Stonecutter Textile Mills. When we arrived at Myrtle Beach Park, there were six families waiting, and we were all admitted to the camping area. We helped unpack the truck, set up the tent, and my brother and I hurried off to the Atlantic Ocean.

Our days were spent playing and floating in the constantly moving salty waves and enjoying the sandy beaches and hot summer days. Each morning we awakened to the aroma of dad’s country-cured ham, cooking in an iron skillet, on the open fire. Dad spent his days fishing off the pier. On Thursday, with an unexpected tug his new rod and reel fell into the ocean. He cut our vacation short, and we returned home.

Later that summer, an Air Force jet trainer plane crashed into the same pier, killing four. We were thankful daddy was not fishing off the pier when the crash occurred.