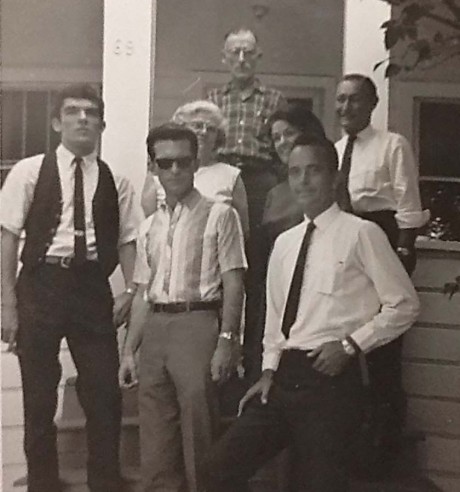 The Chuck Wagon Gang when they visited our house. Ronnie Page (dark glasses) and Jim Carter are in front. Anna Carter Gordon stands behind Jim, and her husband, Howard Gordon, is behind her. The other member of the group, Louis Clark, would get to town later. My brother took this photo with me in it (wearing a vest). I took one with him in it. My mother is beside me, my father behind her.

On rare occasions over the years, I have had a chance to meet someone we would consider “famous.” When I was growing up in West Asheville, we even had “famous” people come to our house, not once but twice.

The first time was when I was about 8 or 9. My father was a veterinarian who worked for the U.S. Department of Agriculture. One evening, an older lady came by our house to get some papers signed. Something about selling some goats.

As soon as she came in, my father walked her to the bookcase and said, “See, we have your husband’s books.” I was confused. Why did we have his books? Had he given them to us? Knowing I should be seen and not heard, I didn’t ask. I gave the matter little thought for several years.

It was only as a college student, appearing in a production of “The World of Carl Sandburg,” that I realized that had been Mrs. Sandburg at our house. The books were Carl Sandburg’s four-volume “Abraham Lincoln: The War Years.”

Other celebrity guests visited during the summer after my first year in college. The Chuck Wagon Gang was in town for a concert. My brother, Benjamin, was active in their fan club. The group was to have dinner at the home of the club’s president, a friend who lived nearby. Benjamin and I were invited to the dinner, and he arranged for the two of us to drive the Gang from their hotel to our friend’s home — by way of a brief stop at our house to say hello to our parents. They also graciously posed for photos with us.