Linemen on the night shift - Carolina Country
I Remember
March 2014

Linemen on the night shift 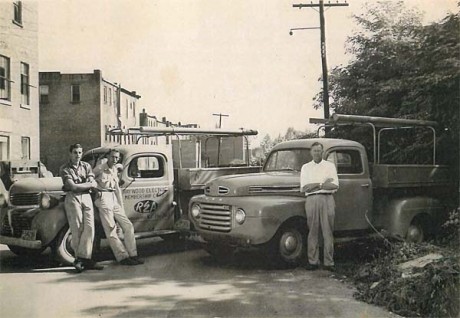 My dad, William “Bill” Moore (far left), in front of the REA truck in Waynesville.

My father, Bill Moore, started working for REA in Waynesville (Haywood EMC) when he was 16 years old and retired after 38 years. He would tell us stories of working in those early years. This was one of his stories.

The road to Cashiers was so bad back then that the drive from Waynesville would take all day. The REA office staff had to find local people who were willing to put up the linemen for a few days.

Daddy said it was very cold outside when he and the other lineman got to the man’s house where they were to stay. There was only a small fire burning, one where you only saw a flame shoot up occasionally. They went on to bed, hoping to get warm but didn’t. Their room turned out to be in the attic. The next morning they found the man’s cat had frozen to death in the kitchen. They didn’t stay with him again.

Dad worked without gloves or insulated underwear in the winter without ever complaining. Work was hard on the men back then. He loved his job and was thankful for it. Dad died on Oct. 15, 2013, from injuries sustained in a tractor accident. He was 83 years old.