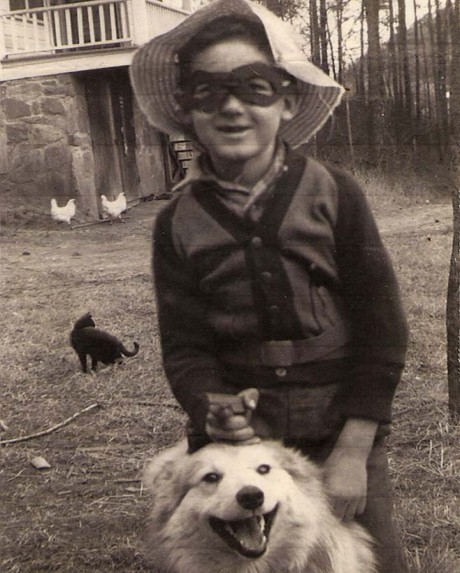 This photo was taken around 1950 in South Hominy Valley at the foot of Mount Pisgah. There is a mountain behind the house and Davis’ Creek just down the hill. This is my dog Butch. He also subbed as Silver, the Lone Ranger’s horse (I am the Lone Ranger pictured). The cat in the photo is named Boots. The chickens were eventually Sunday dinners.

I loved Sundays, except when that dratted old preacher came to eat. He would get first choice [of the chicken], which meant a back or a wing for me. When not playing cowboys and Indians, I would spend time pink hook fishing off the old oak bridge, and damming up the cold water was a must. I made slingshots, bows and arrows and cured them out behind the wood-burning cook stove. And there were a mountain of trees to climb. Shoes were for Sunday in the long, hazy days of summer. We had running water (you had to run and get it). The outhouse was in the woods and I seldom went all the way at night. I had heard about the “painters” (black panthers) coming around at hog-killing time — many times at night did I hear hounds running some critter and wonder what they were after.

I would climb into an old worn-out canoe and ride the rivers of my memories every chance I had. I never knew who might show up and take a ride, might even be The Lone Ranger. Think I will take a ride now.