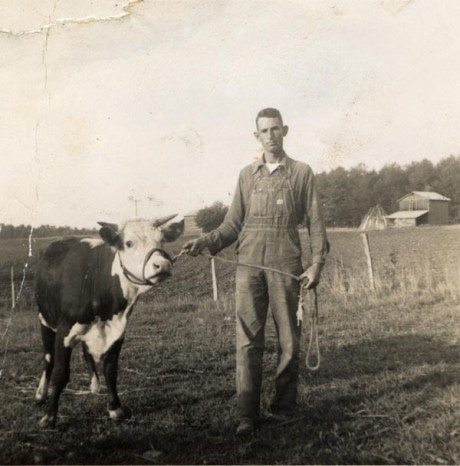 This is my dad, Albert White, with our family cow Blossie.

When I was young, my dad decided I should learn to milk our family cow, Blossie. I didn't even like to drink milk, so I wasn't interested. But Daddy thought I should know how.

My stomach was in knots that morning of my first milking lesson. Daddy said, "Don't scare her." How could I scare her? She was the one scaring me! When I sat down for my first try, Blossie gave me a mean look with her enormous brown eyes and slapped me in the face with her tail. That did it. I was ready to quit, but Daddy insisted I continue.

The lesson became worse as the udder felt slimy and wormy. Ugh! I squeezed and pulled down as Daddy said, but not a drop came out. I couldn't concentrate on anything but her tail that might slap me again at any time.

I never did learn to milk. Had I known that milk would cost $4 a gallon in later years, I might have tried harder. My husband kids me and says he thought all farm girls knew how to milk a cow. I guess not!