By My nephew walked among the pumpkins trying to lift the heaviest ones. 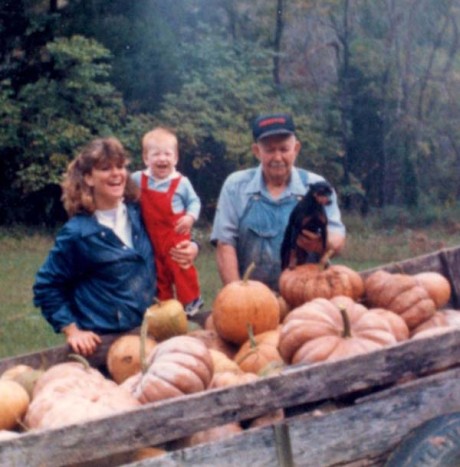 My nephew walked among the pumpkins trying to lift the heaviest ones.

A summer never rolled around that we didn't reap the benefits of my grandfather's hard work in the garden. One summer before I left for college, Pappaw hinted that he'd need me later in the fall to help harvest his first pumpkin patch. Nana wrote me nearly every week at school, and come early October she sent word that the pumpkins were ready.

Nana's mouthwatering breakfast was waiting when I arrived with my 11-month-old nephew, Brett, in tow. He would walk in and out among the pumpkins trying to pick up the heaviest ones. When the last pumpkin was pulled, the trailer was groaning from the load of over 70 pumpkins. Pappaw decided that maybe he was a little too generous with the seeds. He had hoped for enough to share with all of his grandchildren, but he didn't expect this many. When I pulled out of their driveway, my little Toyota truck was loaded with 30 of them.

A few days later, I returned to college. Halfway back, I stopped for gas and some folks noticed my pumpkins. When they pulled away with three in their trunk, I thought, "Only 27 more to go!" As I drove, I made a mental list of friends who would get a piece of Pap's bumper crop. At a quick stop in Greenville, I was able to unload six more.

When I got to campus, I began to worry whether I would ever find enough people to take a pumpkin. I carried my choice pumpkin to the dorm, picturing it carved and giving a warm glow to remind me of the day with my Pappaw. Soon, the inquiries began, word spread like Pappaw's pumpkin vines, and within 24 hours his pumpkins had found homes all across campus.

Our pictures are a heartwarming reminder of that day, but a lasting image in my mind was gazing across campus when darkness fell and seeing jack-o-lanterns of all sizes and shapes that came from my Pappaw's first pumpkin patch.